CryptoWorld Network claims to be “your cryptocurrency future” & it seems the guys behind it are basically attempting to create something similar to Facebook inside of the world of cryptocurrency. They’ve created a social networking model dedicated to crypto-chat & given members the ability to earn money by sharing the platform & referring others. 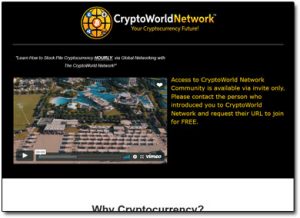 But at a glance, I think you’ll probably agree that the whole thing just sounds like some kind of pyramid scheme… So what’s the deal here?

Is it actually legit or is CryptoWorld Network a scam that’ll just somehow part you with your cash?

Thankfully you’ve landed in the right place to find out because I’ve done the digging & in this CryptoWorld Network review I’m going to be uncovering everything you need to know about the company & their attached opportunity.

What Is CryptoWorld Network?

The CryptoWorld Network is basically a social media platform, similar to Facebook – only this particular one is dedicated to cryptocurrency talk. On top of that, it also runs a network marketing style referral program through which members can earn money by promoting the CryptoWorld Network to others.

The idea is that the platform will provide a place for experts to chat among themselves about cryptocurrency and a place for newbies to sign up to & be able to get access to experts that will help them get started.

However what I’ve noticed is that there is a very strong focus on the “attached” money-making opportunity, it’s almost as if the money-making thing is the main goal here & that’s likely why many people have slammed it as being a pyramid scheme.

That and the fact that it runs a network marketing style compensation plan, so this basically means rather than just promoting the program yourself you’ll be required to promote it & then get the people you’ve promoted it to, to promote it themselves as well.

But just to make it clear I’m not actually personally calling it a pyramid scheme… However, it’s easy to see it shares some common traits.

How Does CryptoWorld Network Work?

Well in order to actually get access to the CryptoWorld Network you’ll have to do 2 things. Firstly you’ll have to find somebody that’s already inside to refer you, and secondly, you’ll need to pay a fee.

The fees vary depending on the level you buy in it, here are the different levels:

I think you’ll agree with me when I say that those fees get pretty hefty, so what exactly do you get in return for them?

Well, to be honest – not a great deal (at least not in my opinion). Certainly not at the “Networker” level anyway.. This is the most basic level you can join CryptoWorld Network at & for $49/year you literally just get “access” to the network, nothing else exciting other than that.

For almost $450 more you’d expect to get quite a lot more in the Pro Membership but nope, not really. The Pro Membership just gives you the ability to create your own groups inside of the CryptoWorld Network & these groups work pretty much the same way they do on Facebook. So basically if you wanted to create a group dedicated to a specific subject then you could do just that…

Or alternatively, you could… You know… Just do it on Facebook without paying $499/year LOL.

So yeah, the Networker & Pro packages, in my opinion, aren’t all that – not for the money at least.

Personally I don’t really see the buzz – there’s plenty of crypto-orientated groups already floating about on other networks like Facebook & you’d likely get the exact same benefits joining them for free as you would joining CryptoWorld Network. It appears to me that there is a real push on the make-money side of things here & that many people might be buying the memberships merely so that they can earn money by referring other people into it (rather than buying them for their actual benefits).

If that were true then it would be very bad news indeed, but unfortunately, I have no way of proving whether they are or not so all I can do is assume that might be the case. You see CryptoWorld Network is what’s known as a pay-to-play program which means you can only earn money at the level you are personally invested, so if you refer somebody & they upgrade to VIP you won’t earn anything unless you are also VIP.

What Is The CryptoWorld Network Compensation Plan?

Basically the compensation plan is paid out through a pyramid-style structure – that’s why in general network marketing companies often get bad reputations because people mistake them for pyramid schemes. The difference from a legal point of view is that a network marketing company is not a pyramid scheme if more people are joining for the products than for the attached make-money opportunity.

As you can imagine it’s often a fine line between the two though & that’s why as somebody signing up to an opportunity it can be very hard to tell. Personally, for this reason alone I just tend to steer clear of them.

The important part though is that each person on a level is placed onto a different side, a left & a right side. So the first person you refer will be put on one side, the next person will be put on the other side etc.

This basically forms 2 teams below you – a left & a right team.

Through the InstaCrypt compensation plan, you will be paid 10-20% commissions on the overall sales volume of the weaker team. The commission rate payable to you will depend on how many personal sales you make, the more you make the higher commission percentage you will be paid from your downline.

On top of that CryptoWorld Network also offer a Matching Bonus. This is a 50% matching commission bonus on the earnings of the people on the first 5 levels below you – so whatever they earn they’ll match 50% of it & pay it to you.

I’ll admit that overall the compensation plan could prove to be fairly lucrative however whilst that might be the case I think it will also be a bit of a struggle to sell those $999 memberships because in my opinion you don’t really get amazing value for money. That means whilst the compensation plan itself may be lucrative you’ll have to really work on your sales pitch & technique if you actually want to make any money.

Is CryptoWorld Network a Scam?

Well I wouldn’t say it’s a scam as you do get what you’re promised for your money & you do also get the ability to earn money by promoting the company as they say you do, however I personally won’t be recommending it.

The reason I won’t be recommending it is that in my opinion the memberships sold just don’t really offer good enough value for money & I think as a result the main reason people will be joining this company is actually just for the money-making side of things. If this was to be the case it would lean towards being a pyramid scheme & that’s certainly something I would avoid.

Obviously I’m not saying that’s what it is, but I’m just trying to stress that there’s a fine line here with this type of business model because of the way the compensation plan works & how it pays out on multiple levels.

I also think that if you are going to promote something to make money it’s much easier to make money by promoting a product or service that actually gives amazing value to its customers – that way you don’t need to do any selling. Here with the CryptoWorld Network, I think you’ll have to do an awful lot of selling to get people to actually buy into it… I think you’re just making unnecessary hard work for yourself.

So yeah overall I wouldn’t say CryptoWorld Network is a scam – it’s certainly nothing like the crypto scams I’ve exposed here recently (such as CoinBulb & Bitcoin Loophole 2 etc) but I still won’t be recommending it based on the reasons that I’ve just outlined above.

The concept itself is interesting but I think it still needs a bit of work and more value adding to the memberships to make it something I could ever potentially recommend… But anyway, hopefully, this review gave you the insight you were looking for into this company & if you happen to have any further questions or comments don’t hesitate to leave them below.