The Bitcoin Loophole 2 system claims that it can earn you as much as $300 within just 1 hour of signing up & as the name suggests it’ll allegedly be doing this by exploiting a supposed “loophole” that they’ve found in the blockchain. 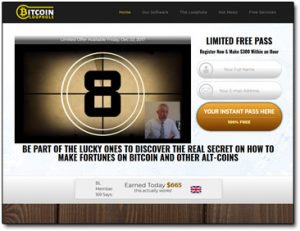 However, as you’ll probably agree that’s a pretty bold claim to make so can you really believe it or will the Bitcoin Loophole 2 scam you out of your hard-earned cash? I’ve done the digging & in this review, I’m going to be sharing my findings.

So if you’ve been thinking about trying out the Bitcoin Loophole 2 system then you can rest assured that you’ve landed in exactly the right place to find out everything you need to know about it before you do.

What Is Bitcoin Loophole 2?

The Bitcoin Loophole 2 is an automated trading system that supposedly exploits a loophole in the blockchain technology & as a result, the system claims it can generate you profits of well over $300 per hour – an extremely bold claim I’m sure you’ll agree.

However there’s a lot of hype surrounding Bitcoin at the moment & a lot of people are not quite sure as to what it actually is or how it actually works, so it’s likely that people (maybe even yourself) may be slightly convinced by this system…

But unfortunately, after taking a closer look at it myself I can confirm right from the off that sadly, it is a classic case of “too good to be true”. The Bitcoin Code is nothing more than a get-rich-quick scam & unfortunately, it’s been designed purely with the intention of parting you with your hard-earned cash.

The reason I was able to tell so quickly that it was a scam is that there have been a LOT of cryptocurrency scams launching lately many of which I’ve exposed on this blog (such as the ICO Money Maker & HoneyBTC programs).  This particular Bitcoin Loophole 2 system share all the exact same common traits & so, therefore, it was pretty easy for me to spot this one out.

But of course, I did take a closer look at it “just to be sure” and in this review, I’ll show you exactly how it all works…

How Does Bitcoin Loophole 2 Work?

Well in the sense of making money the Bitcoin Loophole 2 doesn’t work, at least not as promised – but what I will do here is run you through how it’s supposed to work & then show you why it’s actually nothing other than a big fat scam.

Okay, so the way the Bitcoin Loophole 2 is supposed to work is actually pretty simple. You’re told that all you need to do is sign up, deposit with their “recommended” broker & then hit the start button to fire the system up.

From here you’re led to believe that the system will take over & that it will start making profitable trades for you on complete auto-pilot, generating you an average of $300 per hour on complete automation.

It’s certainly a nice fantasy but unfortunately, that’s all it is – a fantasy.

The Bitcoin Loophole 2 system actually revolves around binary options trading, and if you know anything at all about binary options trading then you will likely know that it is very, very risky. So risky in fact that the USA & several other countries put a complete ban on it within their borders.

There are 2 big problems with binary options. Firstly it’s an unregulated industry which means many of the brokers are rogues & they are purely out to steal your money. Secondly, it is designed to make you feel like you are in control of your profits but in reality, it is a complete gamble with odds worse than guessing the flip of a coin.

Ultimately it is designed in the broker’s favor & the brokers are pretty much all scammers. It’s a pretty bold claim to make but unfortunately, it’s true – that’s why I had to put an entire article together helping people get their money back from binary options scams. If you click through to that page & read some of the comments you’ll see first-hand just how bad this thing is.

Anyway about a year or 2 ago binary options scams were HUGE – they were everywhere. Thankfully the governments ran campaigns to make people aware of the dangers & as a result they died down a little because people became reluctant to deposit.

This, of course, was bad news for the brokers because fewer people depositing meant less cash being made, so they had to come up with a way to get people depositing again… And that’s what has spurred on all these cryptocurrency scams.

Remember when I said many of the brokers in the binary options industry were rogues? Well, they are, and so much so that they are willing to create fake systems like the Bitcoin Loophole 2 to con you out of your cash.

The “recommended” broker that you see as you progress through the system isn’t recommended at all – that’s the broker that is behind this whole thing. The whole thing is just a ploy to make you think you can profit so that you’ll be more likely to deposit with them.

If you do deposit (which I absolutely don’t recommend you do) then you’ll be left to find out the hard way that the system doesn’t work as promised. Instead of making automated profitable trades like it claims it will, it will make nothing but automated losses.

Your money will quickly start depleting from your account & even if you catch it in time & stop the system before it burns through your entire deposit the likelihood is that the brokers still won’t let you withdraw. It’s a complete scam, and money you deposit into these things will be 100% as a good as gone from the moment you do.

Honestly, there isn’t a single bit of truth to be found on the website of the Bitcoin Loophole 2 system – everything they’re telling you is just complete lies in an effort to convince you into depositing your money.

But it doesn’t end at the website either because after entering your phone number you’ll immediately be called & the “customer service agent” from the company will continue to reel off even more lies to you over the phone.

At first, they seem nice & willing to help but if you question the legitimacy of the system you’ll find they get very rude & aggressive – a sure sign that it’s a scam because they get straight on their defence when they know that you’re onto them.

I’ll admit that to the unsuspecting eye the website looks pretty darn convincing, but sadly that’s all it is – it is 100% not legitimate. Despite how much they stress that you’re guaranteed to make profits it’s very funny how at the bottom of the page they add this line in among the small print:

You may lose some or all of your invested capital, therefore you should not speculate with capital that you cannot afford to lose

Why would they do that? Oh yeah, because it 100% doesn’t work & they know that in actual fact you’ll do nothing other than lose money. They’re just trying to cover their butts & making a pretty poor attempt at doing so.

Is Bitcoin Loophole 2 a Scam?

Yes, it 100% is – it’s no different to any of the other cryptocurrency scams I’ve exposed here in the past on this blog & sadly I imagine there’s still a lot more to come in the near future… At least whilst all the hype is still surrounding Bitcoin there will be anyway.

But yeah, ultimately you need to completely avoid this system because it’s clear to me that it’s been set up with the sole intention of parting you with your hard-earned cash to make the creators wealthy at your expense.

There are various ways that you can make money online legitimately but there have never been & never will be any way that you could just press a button & start making profits like $300 per hour, that’s just crazy. The internet is a powerful tool but it’s not magical & if there were such a thing then nobody would be a working a job, everybody would just be enjoying the benefits of an automated income.

So hopefully this review provided you with the insight that you were looking for into this system & more importantly I hope it prevented you from parting with your hard-earned cash. If you do happen to have any further questions or comments don’t hesitate to leave them below.