Everybody knows the impact of social media advertising in the contemporary world and this is what attracts businesses towards the online community. Today, most advertising strategies mainly rely on online promotions. Easy Cash 4 Ads is one of those seemingly attractive platforms which encourages you to join and earn money without really having to do anything complex by taking advantage of this ever-growing market. 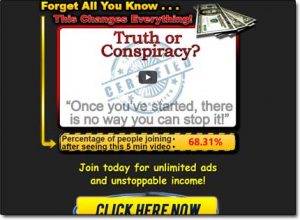 If you or someone in your social circle has ever talked about the Easy Cash 4 Ads scam then you’ll have no doubt tried to dig deeper into it. Some followers have asked me to reveal the truth about it & that’s exactly what I’ll be doing through this Easy Cash 4 Ads review.

Before you put your hard-earned money at stake you need to make sure it doesn’t go in vain. This review of Easy Cash 4 Ads will inform you about the reality of this so-called lucrative scheme. Keep reading if you want to know whether Easy Cash 4 Ads is yet another attempt to rob people of their cash or if it is a legit money-making platform.

What Is Easy Cash 4 Ads?

Promoting the slogan – “The Hottest Scene in Advertising” – the demonstration video reaches far beyond reality with the claims that you could earn so much in just an hour that it would exceed the total income of you earned through your entire life.

The video also talks miracles that after joining this program you’ll see no reason to continue your job. Easy Cash 4 Ads breaks all limits in an attempt to provoke the vulnerable greed-factor. As far as I’m concerned, it should actually alert anybody who possesses even a small amount of common sense. I’ll call it a poorly done video which, at times tends to trigger alarm bells by making unbelievable claims.

Like many other money-making platforms, Easy Cash 4 Ads also talks about a secret program which generates regular incomes of unrealistic proportions. The website claims that you’ll subscribe for the access to this mythical program and then you’ll just have to view advertisements. As far as the concept of making money by viewing ads is concerned, you can’t easily doubt it because it is common these days and a few platforms do really pay people for viewing ads.

The problem here is, paid ad viewers don’t even earn 1% of these earning promised by Easy Cash 4 Ads. The video is extremely confusing in the sense that it doesn’t actually define the nature of work. As per my research, there is actually nothing related to ad viewing. The fact of the matter is that the platform asks you to recruit more people. So it is basically a mechanism which only sells a so-called magical software. Once somebody registers, he is then encouraged to bring in more. So people pay for nothing and then they start to recruit others in order to simply balance their loss.

How Does Easy Cash 4 Ads Work?

Anybody who wants to join this program has to initially make a couple of payments. The first is the $9 administration feel followed by $10, the amount you pay to your recruiter. It means that the website doesn’t even reward the recruiters from their own income. Or you can say that this is a trick to demonstrate that the website is getting only $9 and paying more to the recruiters. This could be an intentional promotional strategy.

The ad viewing is nothing but a smart cover-up to coat the whole practice so that it appears legitimate. This would have been an extremely smart idea, had the video been kept under limits. What makes the idea so smart? Let me explain via an example.

Suppose I have a notebook which is completely worthless. I trick one of my friends by saying “if you purchase a page from this book for $9, I will reveal a secret to you”. Once agreed, I’ll take his money and tell “that’s the secret! Bring your friends to me and I will give you 50% of whatever I get from them by using the same trick”. Your friend will now think “OK, I’ve been tricked! There is a way to balance my loss. I’m not doing anything wrong, it’s him!”…

The exact same pattern is followed by Easy Cash 4 Ads. There is actually no secret whatsoever. All of the claims about magical software, powerful access, money generation, and super-fast ad watching income, are nothing but traps.

Once someone joins this program after paying a sum of $19, he/she will discover something extremely annoying and irritating. The new member is introduced to the “2-Up System”. The system states that a new member doesn’t get paid anything for his/her first two recruitments.

This is annoying because the recruiters never mention this system when they encourage and request someone to join… The whole game revolves around deceptions.

The new member, who has just paid $10 to his recruiter will then actually have to pay the same recruiter for his/her first two successful recruitments. For instance, if you joined this platform on my request, you’ll first pay me $10. Once you become a member, and you bring in a friend, you’ll again give me $10 which you actually deserved because you are the one who brought the new member in.

The same thing will happen when you successfully complete your second recruitment. After sacrificing for the first couple of recruitments, finally, you’ll have the chance to earn something for further recruitments.

As far as the system is concerned, it actually pays to its recruiters and promoters. The question is, for how long will this platform survive? I mean it is offering nothing but taking money from a people through deception. Even the recruiters participate in crime – intentionally or unintentionally – as they also know that the website doesn’t sell anything, doesn’t offer a service, there is nothing of value in it.

On moral and legal grounds, I will suggest you to stay away from Easy Cash 4 Ads. Even if you join it, the calculations don’t work the way they have been advertised. Convincing even a single person to join such a platform is a tough ask. It’s better to not even think of joining such a program because the likelihood is that you will just end up losing money rather than actually making it.

The truth is that you can actually make good money online, but what you have to understand is that whilst the internet is great it is not magical & there is no system that will make you lots of money with little work. If you want to make the good money you must be prepared to put in the work & you must also realize that it likely isn’t going to happen overnight.

The good news though is that if you are prepared to put in the work then there are legitimate programs out there like Commission Academy for example that will provide you with all the tools & training you need to see real success online. Like I say it will take work but providing you put in the work you will see results for sure.

If you continue chasing shortcuts like those promised by the Easy Cash 4 Ads system and other systems like it then you will just keep getting burned & losing money. That’s why I always warn about trying to get quick – the concept is just a fantasy & scammers take advantage of it to lure in their victims.

So overall to reiterate I will not be recommending the Easy Cash 4 Ads system, but hopefully after reading this review you can appreciate why. I also hope this review provided you with the insight that you were looking for into this system.

If you do however still happen to have any further questions or comments then don’t hesitate to leave them below & I’ll do my best to get back to you as quickly as possible.