The Einstein Success Code website claims that it can teach you how you can begin attracting literally anything you want in life – whether that be good health, wealth, love or happiness & it’s apparently been based on Albert Einstein’s own exact “secret loophole”. 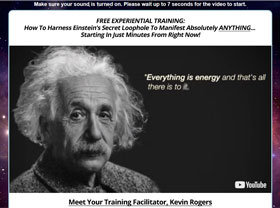 But what’s the deal here – is the whole thing actually legit or is The Einstein Success Code a scam that’ll just ultimately part you with your cash & leave you with some useless BS in return?

Thankfully you’ve landed in the right place to find out because I’ve done the digging & in this review, I’ll be uncovering everything there is you need to know.

What Is The Einstein Success Code?

The Einstein Success Code itself is actually an eBook that’s allegedly been put together by a guy named Kevin Rogers (more on that in a mo) and sold through a popular online retailer named ClickBank.

The eBook is supposed to be based on a “secret” that Albert Einstein used to generate his wealth & Kevin the creator of the website claims that you too can use the secret to manifest literally anything you like.

Though whilst the book is supposedly able to help you manifest anything, it’s clear that the video found on the website promoting the eBook focuses heavily on attracting & generating wealth.

And whilst this might sound good in theory, there’s a bit of a problem. That problem is the fact that ClickBank, which is the merchant that the product is being sold through has become renowned for hosting several make-money scams & this could potentially be one of them.

Some of the other scams retailed through ClickBank include the likes of Take Surveys For Cash & 30 Minute Money Methods – both of which at a glance seemed entirely legit (like The Einstein Success Code potentially does) but turned out to have no other intention than making the creator wealthy at the customer’s expense.

And another worrying fact, in my opinion, is that the eBook isn’t being retailed on Amazon where customers are free to leave reviews. Instead, it’s being solely sold through a website that specifically does not provide the function for customers to leave reviews (which leads me to assume that the creator is potentially anticipating negative reviews).

I just don’t see any other reason why an author would keep their eBook off Amazon if it was indeed as great as the author is making it out to be since as you’re probably aware the marketplace at Amazon is huge & it would likely mean the author missing out on a lot of potential sales.

But anyway, whilst we’re on the topic of the author let’s take a look at Kevin Rogers himself…

Who Is Kevin Rogers?

This is where things get even more suspicious because according to The Einstein Success Code website, Kevin Rogers the man behind the book itself is apparently a world-renowned neuro-researcher & motivational speaker.

But the problem is that there is absolutely no information at all to be found online that backs these claims up. I mean come on, if Kevin Rogers was indeed such a great guy & such an expert in the field then surely there’d be at least some information to be found about him right? But nope, nothing…

Instead, if you search for “Kevin Rogers Einstein Code” all you get is a bunch of results calling out the program as a flat out scam which certainly isn’t a good sign.

Indeed there are several authors under the name of Kevin Rogers that appear within the Google search results but none of them seem to correlate with our Kevin Rogers, the guy responsible for publishing this so-called “wonderful” secret.

So ultimately our man Kevin Rogers remains a mystery which is making this whole thing look even more & more like a scam. It’s not uncommon for fake names to be used in these make-money scams to hide the true identity of the creators & I suspect that’s potentially what’s happening here, but of course, I won’t be too quick to judge just yet.

However, there were some other problems I noticed which stood out to me…

Red Flags on The Sales Page…

Firstly, I noticed that the website appears to list several “reviews” from Facebook users which all (surprise surprise) claim that the eBook is fantastic & that it’s helped them completely change their lives.

The problem with this though is that all of the comments are fake. If you try & click on the “Like” or “Reply” buttons underneath any of the comments you’ll quickly realize that the comments section is just an image & that they are not actual comments from Facebook as they are made out to be.

You might think that maybe the comments have just been screen-shotted from Facebook but that is also not the case. The reason I can be so confident in saying that is because none of the users display their names, instead they only display an initial. It’s not actually possible to use an initial as your last name on Facebook (and I know about that because I coincidentally tried myself just the other day).

They are 100% fake comments & the last names have been left out to prevent you from going to Facebook & attempting to verify whether or not they are true, because the creator obviously knows that if you did you’d find out that the people are not actually real.

Secondly, Kevin shows you a picture of himself & his wife throughout the video claiming that since discovering Einstein’s “secret” they are now having more fun than an ever, but after carrying out a reverse lookup on the image I found it to be a lie. The photo has actually just been taken from a stock-photo website as shown below:

Is The Einstein Success Code a Scam?

In my opinion, all the signs do point towards this program being a typical “too good to be true” style scam. I’ve seen the same thing many times before, it all looks great up until you pay & then once you do you’re just left to find out that the product you actually get access too in return for your money isn’t anywhere near what it was made out to be.

The only slightly reassuring thing here though in this instance is that generally from what I’ve heard ClickBank as a merchant are fairly good at issuing refunds, so if you do find you have a problem with this product & you contact them directly then there’s a good chance of you getting your money back… But obviously the best thing to do is just not hand it over in the first place.

Ultimately though even if the eBook provided to you through The Einstein Success Code was fantastic, there’s no actual scientific proof or research to back up any of the theories. Essentially in my opinion rather than trying to learn how to “attract” things you’d be better off simply learning how to work towards them. For example, if you wanted to create wealth you could learn how to make money online, if you wanted love you could join a dating website… What I’m saying is that basically in my opinion there seem to be more effective methods of getting what you want for your money. That’s just my 2 cents though!

Alternatively, if you’re hooked by the principles shown to you through the Einstein Success Code website then you might be interested in Tai Lopez’s 67 Steps Program. That’s a similar program in the sense that it talks about attracting the things you want but that particular one has several positive reviews so I’d personally pick it over the Einstein program (which looks more like a scam than anything).

So yeah, overall it’s safe to say I won’t be recommending The Einstein Success Code because it all looks a bit too sketchy for my liking. It seems to be built upon a lot of hype & I think if you handed over your cash you’d likely only find yourself disappointed at what you received.

If you do happen to have any further questions about it or maybe some comments on it then don’t hesitate to leave them below.