The Explode My Payday system has allegedly been created by a lady named Meaghan Harper & she wants you to believe that her system can enable you to make $1076.74 “over and over again”, even if you’re totally new to making money online. 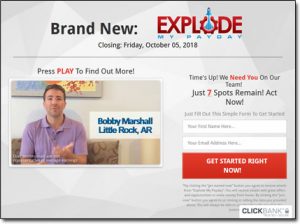 She claims her system provides the easiest method & that you will be pretty much just making money on auto-pilot, but is it really legit & can it be trusted?

Or is Explode My Payday a scam that’ll just end up costing you more money than it ever makes you?

Thankfully you’ve landed in the right place to find out as I’ve taken a closer look into the whole thing to see what it’s all about & in this honest review I’ll be uncovering the real TRUTH about how it all actually works.

Plus, of course, I’ll also be determining whether or not you can really make any money with it.

What Is Explode My Payday?

The Explode My Payday system is a brand new system which has just launched via the ClickBank network and it’s allegedly been put together by a lady named Meaghan Harper as I mentioned at the start of this review.

The whole thing allegedly has been built around a super powerful way to make money & as a result, you’re told that it provides an easy way to make $1076.74 “over and over again” without having to really do any work…

You’re basically led to believe that you’ll just be able to sign up & start profiting, even if you’re totally brand new & have absolutely no technical experience or experience of making money online.

But it seems that whoever is behind the system really doesn’t want to give you any time to look around for reviews as they make several attempts to rush you through the buying process which is always a big red flag.

More often than a not when a program uses scarcity tactics such as “closing soon” or “only X amount of spaces left” it is just a get-rich-quick scam & they are just using those tactics to rush you into handing over your cash as they don’t want you to discover that it’s a scam.

Now don’t get me wrong the use of fake scarcity alone doesn’t mean it’s a full-blown scam, however, I have exposed literally hundreds of scams over the years & I can tell you that it sure is displaying all the tell-tale signs.

Obviously, though I’m not just going to brush it off as a scam without taking a closer look at it, so instead keep reading & I’ll show you exactly how it all works below so you can see what’s really going on. 🙂

How Does Explode My Payday Work?

That’s because the system is indeed pretty much just a typical get-rich-quick scam.

It promises you the world, claims that you’ll be able to make a whole bunch of money super easily & quickly but then it just leaves you to find out the hard way (after handing over your cash) that it doesn’t work as promised.

All you actually get access to after handing over your money (which I obviously don’t recommend doing if you haven’t already) is some extremely basic training on something called affiliate marketing.

Now, this is where I want to point out that affiliate marketing itself is actually a legitimate & VERY good way to make money online. In fact, it’s the same way I personally make most of my own money online.

However to properly succeed with affiliate marketing you need proper training – like that found at Commission Academy… And this is what the Explode My Payday system fails to provide you with.

In fact, the only reason they give you any training at all is likely to try & prevent you from getting a refund… I’m pretty sure that if they could get away with giving you absolutely nothing they probably would.

What Is Affiliate Marketing?

In short, affiliate marketing is basically where you promote 3rd party products or services online in return for commissions on any sales that you manage to generate & it’s a pretty effective way to make money.

You basically get a unique link to share the products or services on their website & it’s your job to promote this online. If you promote it effectively & people click through it & make a purchase, the sale gets tracked back to you & you earn a commission.

And like I say there are legitimate places that you can get started with it such as Commission Academy (which is a place that provides you with literally everything you need to find success with affiliate marketing).

But the problem with programs like the Explode My Payday program is that they’re just really hyping it up purely so that the creators of the program can make money at the expense of others by tricking them.

Yes you can make a LOT of money with affiliate marketing, in fact right now I am making over $10,000 per month, but it won’t happen overnight and it takes a lot of work to get to that stage as you can probably imagine.

The internet is great for providing additional opportunities to make money but it’s not magical & therefore there is never going to be a program or system that’s just going to generate you so much money so easily.

Anything that promises otherwise is likely just trying to scam you.

That’s Why The Video Contains Actors

Yup, those people that are shown in the promotional video for the Explode My Payday system are actually all actors & the reason I can be so sure about that is that they all also appeared in the video for the 7 Figure Profit Code scam that I previously exposed on this blog. 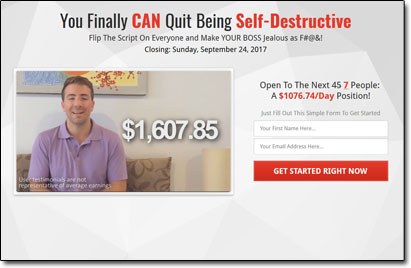 It looks to me like the creators of the 7 Figure Profit Code have simply switched the name of the system around in an attempt to escape the negative reviews so that they can continue parting people with their hard-earned cash.

Is Explode My Payday a Scam?

Okay, so you DO get access to some training via the Explode My Payday system – but due to the way that you’re sold into it (on such misleading claims) in my opinion I do believe the whole thing is a scam.

It’s clear to me that they’re not really interested in helping you find success, they just want to make themselves some cash at your expense & that’s why in my opinion I’ve come to the conclusion it’s a scam.

The simple truth is that if you sign up to Explode My Payday system you will NOT make money anywhere near as easily as you’re promised you will, and to be honest you probably won’t make any money at all.

If you really want to make good money with affiliate marketing just stick with a legitimate & proven program like Commission Academy instead. It’s there that you’ll learn how to find proper success online.

So overall there’s no way I’ll be recommending the Explode My Payday system to you because as far as I’m concerned its total BS. If you do still happen to have any further questions or comments about it though then don’t hesitate to leave them below.