The Facebook On Fire system promises to provide you with a way to begin generating as much as $3,574.65 per day just by fooling around on Facebook. You’re led to believe that you can sign up, get access to a “secret” method and start profiting almost right away. 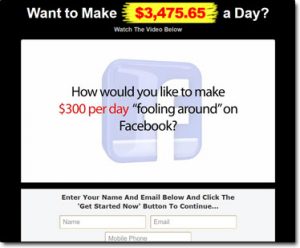 But it’s likely that you’re sceptical about the whole thing & you have very good reason to be… So what’s the truth?

Is it actually legit & can you really make money with it or is Facebook On Fire a scam that’ll just see you spending more than you ever make?

Thankfully you’ve landed in exactly the right place to find out because I’ve done the digging & in this review, I’ll be uncovering everything there is you need to know, including how it all really works.

Facebook On Fire is a relatively new money-making system & it claims to provide you with an easy way to earn as much as $3,574.65 per day by just apparently “fooling around Facebook”…

Well, that’s what the website states at least, but the video promoting it states otherwise (as shown below): 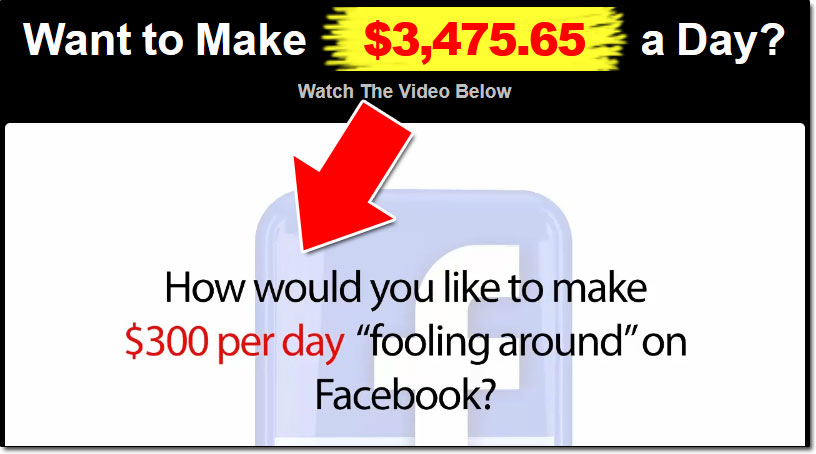 The truth is more like $0 per day because I can tell you right from the off that the Facebook On Fire system is actually nothing more than a typical get-rich-quick scam & its real intention is to part you with your cash, not help you make it.

The only person getting wealthy from this system will be the person that’s behind it all, and he’ll be doing that at your expense… He certainly won’t be doing it by “fooling around Facebook” that’s for sure.

But obviously I don’t expect you to take my word that because I appreciate you might have been really hoping this system would work for you & be disappointed to hear it doesn’t. So instead I’ll walk you through how it all really works so that you can see for yourself what’s actually going on…

Ultimately the Facebook On Fire system has just been designed to get you really hyped up about the potential opportunity of making lot’s of easy money from home so that the creator can trick you into parting with your cash.

You’re pretty much led to believe that after signing up to the Facebook On Fire system you’ll get access to some sort of online “job” through which you’ll be paid directly in return for posting, sharing & liking things on Facebook…

And it’s likely that’ll initially sound like quite the dream job to you which is exactly what the creator of the system wants you to think – but sadly the reality of it all isn’t anywhere near as great.

Instead, after paying the $47 fee to get access to the system all you’ll find you’re provided with is some low-quality affiliate marketing training which basically just serves as a “teaser” designed to push you into buying the several upsells that you’ll then presented with.

Now before I continue let me just make it clear here that affiliate marketing in itself is actually a legitimate & very good way to make money online – the problem though is that way you’re introduced to it through this particular system.

In fact, as I mentioned the training they provide you with isn’t really training it all. It’s just more videos geared towards hyping you up about the potential opportunity of making all this easy money from Facebook (which doesn’t exist).

After all, as you initially go through it doesn’t seem like too big of a deal because they make out like you’re going to make it all back… But sadly once you get to end of all the upsells you’ll be left to find out the hard way that’s not the case.

The reason you’re pushed through into that is that the creator of the Facebook On Fire system is affiliated with it meaning if you sign up & invest he’ll earn yet even more money at your expense… And that’s honestly all he’s set out to do.

Okay, this is the part where you need to pay close attention because yes, you can make money with the concept the Facebook On Fire system is loosely based on – but no, it’s unlikely that you’ll actually make money as a direct result of going through this particular system itself.

You see as I mentioned earlier in this review the Facebook On Fire system is loosely based around affiliate marketing. This in itself is a very good way to build an income online & it essentially consists of you promoting 3rd party products online in return for commissions.

There are several legitimate places you can learn how to get started with affiliate marketing such as Commission Academy for example. That’s a place that gives you all of the step-by-step training & tools you need to get started.

The problem is simply that it doesn’t… But you’re only left to find this out after you hand over your money and sign up to it.

So whilst yes, you can make money with the method itself that it’s loosely based on – the actual Facebook On Fire system is just a scam that’s been designed to trick you into parting with your cash.

Upon landing on the Facebook On Fire website I was almost instantly able to tell it was going to be a scam & that’s because of all the red-flags I seen on the site. I figured I’d take a moment here to point these out to you in case you happen to come across anything else like this in the future…

When you land on the Facebook On Fire website one of the first things you’ll likely notice is that there are absolutely no contact details to be found anywhere on the site… This alone is a huge red flag. It’s common for scams to keep their details hidden so that once it gets shut down the creators can then simply launch another one under a different name without any trace following them.

2. The Promise of Easy Riches

This is where it comes down to the good old saying “if it sounds too good to be true, it probably is”… Yes, the internet provides you with a lot of extra ways to make money but it’s not magical & none of them are going to see you earning lot’s of money without actually having to do anything. If there was such a system then everybody would be using it… Sadly there isn’t, and never will be… So if something promises lot’s of money for little to no work it’s likely trying to scam you.

The “real members” that you’re presented with in the video are all actors – and if the creators are having to pay people to pretend they’ve made money, it’s likely because none of the real members are actually making money. Here’s an example of one of the actors used on the sales page for this system:

As far as I’m concerned in my opinion yes it is. The whole thing is extremely misleading & it’s clear to me that it’s nothing more than a ploy to make the creator wealthy at your expense by tricking you into signing up.

None of the claims you’re told hold true & the fact that they’ve had to pay actors to pretend they’ve made money through the system just says it all in terms of what’s really going on here.

Therefore overall I’m definitely not going to be recommending this system to you because ultimately if you sign up I feel like you are just going to find yourself disappointed… Plus you’ll probably end up losing more money than you ever manage to make.

If you really want to learn how to make money with affiliate marketing the right way then I suggest you check out my Wealthy Affiliate review instead. It’s there that you’ll get access to the proper step-by-step training that will actually help you succeed online (as opposed to the junk dished out by the Facebook On Fire system).

Anyway, I hope my review gave you the insight into this system that you were looking for & helped you save your hard-earned cash. If you do happen to have any further questions or comments though then don’t hesitate to leave them below.