The Ford System is a newly launched automated trading system that claims it can allegedly enable you to “ride the Bitcoin wave” and see profits of up to $1,500 per day, all on complete autopilot, even if you don’t know a thing about cryptocurrencies. 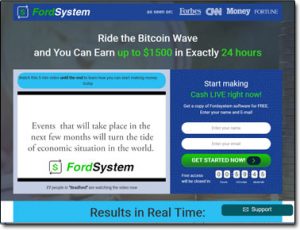 You’re even led to believe that you’ll be able to make your first $1,500 within just 24 hours of getting started… But such a bold claim will probably leave you feeling pretty sceptical about the whole thing – so what’s the deal?

Is it actually legit or is the Ford System a scam that’ll just end up seeing you lose money rather than actually make it?

Luckily you’ve landed in the right place to find out because I’ve taken a closer look into this system to see how it all really works & in this review I’ll be uncovering everything you need to know, including whether or not you can actually make any money with it like they claim you can.

What Is The Ford System?

As I briefly touched on above the Ford System is an automated trading system that claims it can enable you to generate profits of up to $1,500 through automated online Bitcoin trading.

You’re pretty much led to believe that you’ll be able to simply sign up, deposit some funds & hit the “start” button to begin making money… But in reality, things won’t work out quite like that.

The truth is that the Ford System is actually just a binary options scam & the only thing that it’s really set out to do is take money from you, not help you make it as it claims.

Therefore if you happen to deposit anything through the Ford System you’ll be left to find out the hard way that it doesn’t work as promised, because the whole thing is literally just a ploy to make the creator wealthy at your expense.

And the reason I can say that so confidently right from the off is because I’ve seen hundreds of these binary options scams over the years meaning I know exactly how they work (or should I say don’t work).

Some of the other scams I’ve exposed similar to this one include the Bitcoin Millionaire Pro & Delta Tech systems… They both make similar promises to the Ford System & the whole scam works in exactly the same way.

But obviously, I appreciate that you won’t just be wanting to take my word for all this… After all, I know you will have likely been hoping that this system would actually work for you – so instead I’ll run you through how it all works & that way you’ll be able to see for yourself what’s really going on here…

How Does The Ford System Work?

Just in case you happened to skip straight down to this part of the review then let me re-iterate that the Ford System doesn’t work as promised – and that it will not help you make money like it claims.

So basically, the creator of the Ford System (who remains anonymous) has affiliated himself with a binary options broker. This means that it gets people to sign up with the broker, he earns money they deposit funds…

The broker basically pays him a commission.

And the reason the broker pays the creator of the Ford System this commission when he gets those new members is that the brokers know that binary options trading is extremely risky – and that the person trading will be pretty much guaranteed to LOSE their money.

It’s so risky in fact that even Forbes published an article warning about the dangers as shown below:

This means that the brokers will stand to make money at the trader’s expense.

But the creator of the Ford System is clearly a cunning person because he, like the other scammers behind these things, has come up with a way to trick people into depositing with his “recommended” broker…

AKA the broker he’s getting paid a commission from.

And guess what? The Ford System is his trick. The whole system is a total phoney – it doesn’t really generate guaranteed profits as it claims, it’s just a ploy to get you to deposit with his “recommended” broker so he can earn himself some money at your expense.

The other kicker to it at all is the fact that the brokers recommended through these things are rogues… They’re in on the scam too. This means that if you think you’ll be able to withdraw your funds back out when you realize it doesn’t work, think again…

The brokers associated with these things will either ignore or point blank refuse your withdrawal requests making it extremely difficult for you to get your money back.

So yeah, in a simple breakdown here’s what’s really going on:

Both the creator of the Ford System & the broker are cashing in at your expense.

The Red Flags To Watch Out For…

For me, it’s easy to see that the Ford System is a scam but that’s only because I’ve seen this exact same scam hundreds of times before. I appreciate for the unsuspecting eye it might not be so easy & for that reason, I want to point out a few of the red flags to look for…

Hopefully, this will put you in a better position in the event of you happening to come across something like this again in the future.

You Don’t Need a Broker To Trade Cryptocurrency

Huge red flag number 1 is the fact that you don’t need a broker to make trades on the cryptocurrency market & if somebody/something is pushing you to use a broker it’s likely that they’re just trying to make money at your expense (and that it’s some sort of scam).

All you need to trade cryptocurrency is a wallet, like a CoinBase wallet for example.

Too Good To Be True

Sometimes you literally just have to step back and ask yourself “does this sound too good to be true?” and as the saying goes, if the answer is yes – it likely is (which is certainly the case with the Ford System).

I mean yes, the internet does provide people with a lot of ways to make extra money, but it’s not magical & it’s never going to provide you with a way to earn lot’s of money with little to no work.

The truth is that if you want to make good money online (which is certainly possible) then you must be prepared to put in some work to make it happen. Thankfully though if you are prepared to put in the work then there are legitimate programs out there like Commission Academy for example that will show you exactly how to get started.

That is generally the number 1 tell-tale sign of a scam at hand. The reason they keep themselves anonymous is so that they can simply start up the same scam under a different name without any trace once this one gets exposed.

Plus… Would you really want to invest money via a website that could disappear at any moment in time without a trace? I sure hope not because no matter how good the promise of money is that’s just way too risky.

Is The Ford System a Scam?

Yes, it is, the Ford System is definitely a scam since the whole thing has been designed purely to part you with your cash in an effort to simply make both the creator & the brokers wealthy at your expense.

Like I say it’s totally misleading & essentially it’s all just a ploy to trick you into “trying it out”, but once you do – that’s when you’ll find out the hard way that it doesn’t work as promised… Only then it’ll be too late because the broker that was “recommended” to you will make it extremely difficult for you to get your cash back.

You see as I mentioned earlier in this review there is simply no program or system that will make you lot’s of money with little to no work. Anything that promises it can do that is likely just trying to scam you.

But providing you’re willing to put in some work then yes, you can actually make good money online & there are legitimate programs out there like Commission Academy that will show you the proper way to get started.

Anyway overall as you can probably guess I won’t be recommending the Ford System to you because ultimately if you end up buying into it all that’s going to happen is you will end up losing money.

Hopefully, you came to this review first though & hopefully it helped save you some cash. If you do happen to have any further questions or comments then don’t hesitate to leave them below & I’ll get back to you as soon as I can.