The Delta Tech trading software claims to have been built around some sort of profitable algorithm & as a result, it can allegedly enable you to generate you at least $1,350 per day through automated binary options trades… 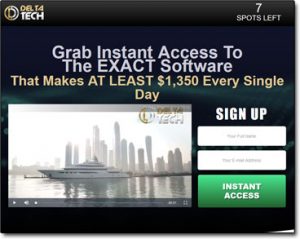 You’re led to believe that you can just simply sign up, make a deposit, hit start & begin making money…

But is it actually legit or is Delta Tech a scam that’ll just see you parting with your cash rather than making it?

Thankfully you’ve landed in exactly the right place to find out because I’ve taken a closer look into it all & in this review, I’ll be uncovering everything you need to know including how it all works & whether or not you can really make any money with it.

What Is Delta Tech?

The Delta Tech trading software is basically an automated binary options trading platform & it claims to have been built around some sort of profitable algorithm which can supposedly see you generating above $1,350 per day, even if you have absolutely no prior trading experience whatsoever.

The creators of the Delta Tech software make out as if you can just sign up, make a deposit with their recommended broker & switch the software on for it to start generating you passive profits as it trades entirely on your behalf.

You know the good old saying that “if it sounds too good to be true then it probably is”? Well yeah, that saying definitely applies here to the Delta Tech system because this system will NOT help you make money.

Instead of helping you make money like it claims it will, the only thing the Delta Tech software is really set out to do is part you with your cash to make the creator wealthy at your expense.

But obviously, I don’t expect you to just take my word for all that – after all, I appreciate you may have been hoping that this system was going to work for you, so instead let me show you how it all works so that you can see what’s really going on for yourself…

How Does Delta Tech Work?

So the Delta Tech software leads you into believing that you’ll just be able to sign up, get access to the system and begin making money – but before you can do any of that there’s 1 all-important step…

That all-important step involves having to sign up the “recommended” broker & making a deposit.

And the reason I say it’s all-important is that firstly without doing this you simply can’t get access to the system, and secondly because this is how the whole thing actually scams you.

Basically the system is fake, and the whole website is a ploy just to trick you into depositing with the so-called “recommended” broker because the moment you do that the creator gets paid a big fat commission.

Then what happens to you? Well, you get access to the system as promised but this is where you’re left to find out the hard way that it doesn’t quite work as promised & that instead of generating profits it actually generates nothing but losses.

So your money will quickly begin depleting from your account, and even if manage to stop it before it all disappears then this is where you’ll face problem number 2 – the issue of getting your money back.

Because surprise surprise the so-called “recommended” broker is in on the scam too, and if you think they’ll just give you your money back then think again. They’ll either ignore your withdrawal request or point blank refuse it.

The only way you could stand any chance of getting it back is by running a chargeback – but obviously rather than having to go through all that hassle it’s much easier to simply just not make a deposit in the first place.

So if you haven’t deposited with them, don’t do it – it’s a trap.

Sadly though this is nothing new – I’ve seen several of these binary options scams before & I know exactly how they work. Other common ones include the Bitcoin Millionaire Pro system & 1K in 1 Day – if you take a look at them you’ll see that they all make similar, ridiculous claims & you’ll realize that they’re flat out scams.

Whenever you’re looking into an investment program one of the first things you should do is find out who actually runs the show. If the website hides these details or doesn’t show them at all then you’re likely looking at something suspicious… And I would never, ever recommend an investment company with a company whose identity isn’t verifiable.

After all, you could invest & then they could simply disappear…

And surprise surprise the Delta Tech website leaves no trace regarding the companies owners. You have absolutely no idea who’s operating it, where they’re based or how you can content them…

Plus on top of that, they don’t even display their license details either (which is a requirement for all investment programs to have) which likely means that they don’t have one – a major red flag.

Based on those things alone I wouldn’t invest a single penny with this company, but couple that with the bold income claims, an over-hyped sales video, false scarcity tactics & it all looks extremely dodgy indeed.

Is Delta Tech a Scam?

Yes, in my opinion, the Delta Tech system is a flat out scam & as far as I’m concerned it’s been solely put together to part you with your hard-earned cash in an effort to make the creator wealthy at your expense.

The whole thing is extremely misleading & after signing up you’re only left to find out the hard way that the system doesn’t actually work as promised but by then it’s too late because they’ve got your money.

The truth is that while you can make good money online, the internet is not magical & there is no system that’s going to enable you to make lot’s of money with little to no work. If you really want to make money then you need to be prepared to put some effort in, that’s just how life works… But the good news is that if you are prepared to do that then there are legitimate programs out there like Commission Academy that will help you get started.

So overall it’s safe to say I won’t be recommending the Delta Tech trading software to you because ultimately I know all it will do is result in losing money. I do hope you found my review useful though & hopefully it helped you save some cash.

If you happen to have any further questions or comments feel free to leave them below.