Formula Profits is the name of a new money-making program which has been launched by a man known only as “James” & it promises to provide you with access to a “secret trick” for making as much as $439.01 per day online. 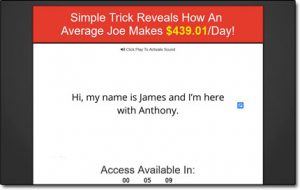 You’re basically led to believe that all of the hard work has already been done for you & that you can simply just sign up, follow some simple steps & then begin generating profits almost immediately…

But the problem is that in order to get access to it (as you might have noticed) you first have to hand over some of your own hard-earned cash… So what’s the deal, is it actually legit? Or will Formula Profits scam you instead?

Well, unfortunately, I can tell you right from the off that the whole thing doesn’t really work as promised & not only will I show you why in this Formula Profits review but I’ll also show you what you can do instead to really make money.

What Exactly Is Formula Profits?

Formula Profits essentially portrays itself as being an “almost” done-for-you system for making good money online & as I mentioned at the beginning of this review it’s been put together by a guy who guys only by the name of “James”.

James claims that he himself was one stuck working a dead-end job & found himself living paycheck to paycheck. In search of more, he started looking online for ways to make money & came across a system which claimed to have the answer to his problems.

From there though he claims that he instead decided to hire a mentor, and according to him within just 3 weeks of hiring a mentor he found himself making a whopping $5,000 – and allegedly his income continued to grow.

He says that he ended up becoming a 6-figure earner & in order to “give back” to those who are also in a similar situation to what he claims he once was, he has created the Formula Profits system… Which is supposedly a “proven system”.

James claims that there’s no risk of feeling stuck or feeling that it’s too technical because he’s supposedly already done 90% of the work.

He says that he’s now just looking for partners & those that partner with him will get their own website and “money-making account” – according to him – as shown in the screenshot below:

So you’re essentially led to believe that you can just sign up as one of James’ partners & then receive your own money making account. Plus, he even claims that you’ll begin earning money right away & that you only need to work as much as 1 hour per day.

But wait… Let’s just step back & take a look at what “James” is promising here. He’s promising that you can…

So hold up – why isn’t everybody doing this?

If you can really make $439.01 per day from anywhere in the world with just 1 hours work then why are people still working at jobs they dislike? Why aren’t they just “partnering with James”?

The answer, as you can probably guess is because James’ Formula Profits system isn’t real… In fact, James himself isn’t even real either. That’s just a fake name being used to hide the real creator of the whole thing.

And I can say that so confidently because the Formula Profits scam is actually just a re-hashed version of a former scam that I’ve already exposed on this blog named The Job Quitter scam.

But you don’t have to “just take my word for it”… Instead, keep on reading & I’ll show you exactly how it all really works below…

How Does The Formula Profits System Work?

Well, the Formula Profits sales page claims that the system involves building an email list & then sending emails. James claims that you’ll earn around $35 for every email that you send, and as shown below he claims that you can easily make $350 per day, just by sending 10 emails:

But that’s simply not true…

The truth is that the Formula Profits system is actually just your typical get-rich-quick scam in the sense that it hypes up the opportunity of earning money, tricks you into handing over your own cash, then leaves you to find out the hard way that what you were promised doesn’t really exist.

I mean think about – if “James” really wanted partners to help him to grow his business then why on earth would he be charging you to become a partner?

It’s like when you get a new job, you don’t pay for the job – the company you work for cover all of the costs & pay you because they’re paying for your help. It’s the exact same thing.

Instead, when you hand over your money & buy into the Formula Profits system (which I don’t recommend doing) you’ll find out that all you really get access to is some extremely basic training on something called affiliate marketing.

Now here’s the deal – affiliate marketing in itself is indeed a legitimate way to earn money online.

The problem doesn’t lie with affiliate marketing because with a proper program like Commission Academy you can indeed actually make good money with it… The problem lies with how the Formula Profits system sells it to you & with the poor training that it provides.

You see yes, affiliate marketing is legit & it is a great way to earn good money online – but like anything, it takes work. You can’t just sign up & start earning hundreds of dollars per day with just 1 hours work per day…

And unfortunately, that’s the pipe dream that scams like Formula Profits sell to people. They just attempt to trick people into thinking that they provide some sort of secret shortcut or trick for making money (which they don’t) in an attempt to get them to part with their cash.

But like I say, the good news is that affiliate marketing itself is actually a legitimate way to earn good money online. It’s actually the same way I personally make most of my own money online.

And so whilst the Formula Profits program itself may not be legit, there are still alternative legitimate places where you can get started – such as Commission Academy (which is one of my all-time recommended programs).

Wealthy Affiliate will not only show you step-by-step how you can get started with affiliate marketing – it’ll also give you all of the tools you need to get started too… So it’s definitely worth checking out.

Back onto the Formula Profits system though…

You might recall that at the beginning of this Formula Profits review I was able to confidently say that it didn’t work even before I checked it out & the reason for that was because I realized I’d already exposed it before under a different name.

And you can see proof of that for yourself because when you go to the purchase page of the Formula Profits system you’ll see that the name on that page is actually still The Job Quitter as shown below:

Back when it was called The Job Quitter it claimed that you could make a “high automatic income” of $3,568.92 per day as you can see in my review here – but of course, that was complete nonsense.

It simply seems that the creator has made another version under a different name in an attempt to escape the negative reviews which exposed the truth so that he or she can continue tricking people into signing up & earning at their expense.

Plus they’ve also lowered the income claim a little in a likely attempt to make it a bit more believable… I mean sure $439.01 per day is still a VERY bold claim (especially for just 1 hours work per day), but it’s a lot less than the previously promised sum of $3,568.92 per day.

My Verdict – Is Formula Profits a Scam?

Yep, in my opinion, the Formula Profits system is definitely a scam. I mean sure, you do get access to “some” training in return for your money which may lead some people towards calling it legit – but I can tell you with 100% certainty that it doesn’t live up to its promises.

The whole thing is massively misleading & the only person that’ll really be making money from it will be the person behind it and he (or she) will simply be earning at the expense of those they manage to sucker into it.

For those reasons I am going to strongly advise that you steer well clear of it & instead, if you truly want to earn good money from affiliate marketing, I will suggest you stick with a proven & legitimate program like Wealthy Affiliate.

Or alternatively, you could even check out my own guide on making $100 per day with affiliate marketing right here.

But whatever you decide to do I just hope that this review of Formula Profits has given you a good insight into what you can really expect from the program & I hope it’s helped you to save some cash.

If you still have any further questions or comments though then don’t hesitate to leave them below. As always I’ll do my best to respond back to you as quickly as I can. 🙂