So, this morning, I happened to stumble across a website named Home Cash Sites that promised to provide me with access to an “unbelievable way to push a button & make $24,197.84”. 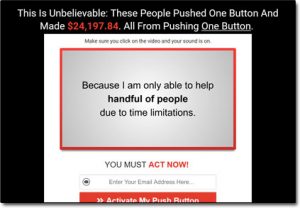 And they were right about one thing… It IS unbelievable.

But is there actually any truth to it? Can you really just push a button & make so much money (or any money at all)?

Or is Home Cash Sites a scam that’s just set out to part you with your hard-earned cash?

Well, the good news is that you’ve landed in exactly the right place to find out because I’ve personally taken a closer look into it & in this Home Cash Sites review I’ll be uncovering everything you need to know.

What Is Home Cash Sites?

Home Cash Sites is the name of a newly launched “make-money-online” website & it promises that it can provide you with a way to make thousands of dollars per day, just by pushing a button.

Upon landing on the homepage of the website you’re congratulated for “making it” & told that you’re one of the lucky few that have been provided with access to the page.

But is it really true? Are you really “lucky” and part of an “exclusive group”?

The short answer is no, you’re not. The Home Cash Sites website is accessible to anybody & the creator of it is actually broadcasting it to people via spam email messages.

In fact, chances are that you too also discovered it via a spam email or pop-up window, right?

And that’s because the creator wants as many people to view the website as possible because, in reality, I can tell you right from the off that the Home Cash Sites system is actually just a scam.

The reason I can say that so confidently is because it’s connected with the Rapid Profit Package scam that I recently exposed (and I’ll show you proof of that further down in this review).

But in short, everything you’re told via the Home Cash Sites website is a complete lie. You’ll see more about that in just a moment but first before I explain that, let’s take a look at the person behind it.

Who Is Behind Home Cash Sites?

You’d imagine that if somebody had created a system that could truly generate people as much as $24,197.84 just by “pushing a button” that they’d be pretty well known, right?

But in the instance of Home Cash Sites, that’s not the case… In fact, the video promoting the system barely even makes any mention as to who’s actually behind it (aside from quickly mentioning the name “Greg Thomas”).

To be honest, it’s almost as if they want to keep the person behind it hidden…

And after running a Google search for “Greg Thomas” there’s very little information to be found. No marketing millionaires appear to go by the name – at least, none that have made themselves known.

Well, it gets even more suspicious because I decided to run a search for Greg Thomas here on my own website to see if his name has popped up in relation to any other programs in the past & guess what?

Greg Thomas was also allegedly behind the Your New Work At Home Career scam that launched back in 2018 & that program made extremely similar claims to that of Home Cash Sites.

Well, I can tell you the chances are pretty slim… But nevertheless, just to be sure I did some extra digging & I discovered that Your New Work At Home Career & Home Cash Sites websites are actually hosted on the same webserver.

And as you can see, there are also some other scam-sounding programs on that webserver too.

How Does Home Cash Sites Work?

Essentially, Home Cash Sites is a program that over-hypes & then under-delivers. There is simply no way that you will find yourself making anywhere near $24,197.84 as a result of signing up.

In fact, you will struggle to make any money with it at all.

You see, the reality is that after handing over your cash to buy into Home Cash Sites you’re left to discover that there isn’t really any “push button” system at all like you were promised.

This means that even you can make money with affiliate marketing, Home Cash Sites won’t be the program to help you do it. It’ll likely just confuse you even further & leave you feeling frustrated.

But the person behind it isn’t really bothered about that because his goal is not to help you succeed with affiliate marketing, it’s simply just to get you to hand over your hard-earned cash so that he can earn at your expense.

That’s his only goal – to con you.

And of course, once he’s gotten your cash he will then make it very difficult for you to get back. A 30-day refund period is promised on the signup page but there is no way that guarantee will be honoured.

Plus, once you buy into the initial program for the seemingly small fee of $47 you’re immediately hit with several upsells for other scams as well, some of which cost $100’s more.

The one pictured below, for example, is the program you’re immediately promoted after signing up: 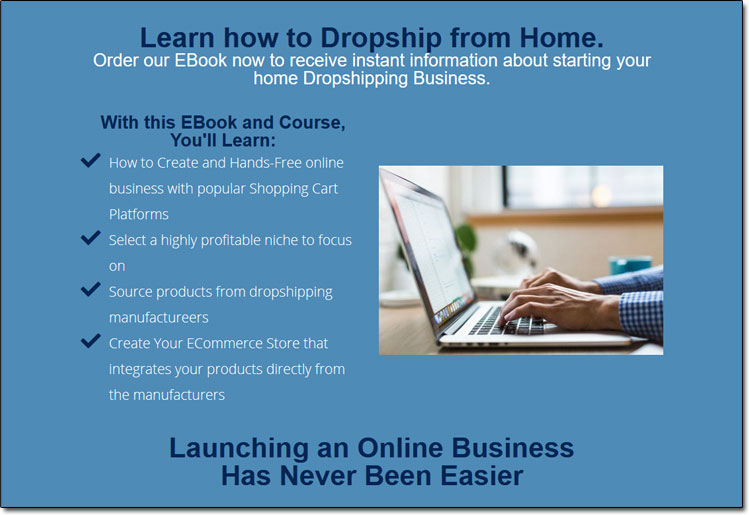 And then if you buy into that you will be promoted with more, and more… And so on.

The person behind it is basically just trying to squeeze as much money out of you as he possibly can & all of his different programs or systems are just selling the exact same snake oil as Home Cash Sites.

Firstly, there’s the fact that as mentioned further up in this review, Home Cash Sites is associated with several other scams such as Rapid Profit Package & Your New Work At Home Career.

In the instance of Home Cash Sites, it definitely is.

But alongside those red flags, there’s also the fact that the creator remains completely anonymous & hides behind the pen name of Greg Thomas.

There’s only one reason I can imagine the owner of such a program would want to hide behind a pen name & that’s because he is either trying to con you or has some sort of other ulterior motives.

Somebody honest & transparent would not do that so you just simply cannot trust the program at all.

So with all of these red flags in mind, there is simply no way that I would recommend you hand over money to join the Home Cash Sites system & that brings me nicely onto my next point…

Is Home Cash Sites a Scam?

Yes, Home Cash Sites is a scam & should be avoided. The program has been built up entirely on lies & if you hand over your cash to join you will just be disappointed at what you actually receive.

There is simply no way that you will find yourself earning anywhere near $24,197.84 as a result of joining Home Cash Sites & the reality is that you will probably spend more than you actually make.

The reason I say that is because the program is not geared towards helping you at all & there is no “push-button system” at the creator claims. It’s all just a con designed to trick you into handing over your money so that the person behind it can get wealthy at your expense.

The good news, however, is that if you are still interested in earning money online then there are actually legitimate ways that you can do it.

One of my top recommended methods is something known as affiliate marketing but if you’d like to, you can go through & check out all of the other methods as well on this page right here.

But whatever you decide to do, I just hope that my Home Cash Sites review here has given you a good insight into what you can actually expect from the program & most importantly, I hope it’s helped you to save your cash.

Feel free to leave any additional questions or comments below.