The Legit Online Jobs website (found at legitonlinejobs.com) has been allegedly founded by a guy named Ross Williams & you’re led to believe that it will give you access to legitimate ways to quickly make as much as $9,117 per month online, even if you’re totally brand new. 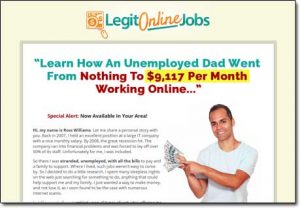 Ross states that you don’t need experience & that you don’t even need to give up much of your time. He claims all you need to do is post some ads & you can begin making money right away…

But is it really “legit”… Or is Legit Online Jobs a scam that’ll just end up taking money from you rather than actually helping you make it?

Thankfully you’ve landed in exactly the right place to find out as I’ve taken a closer look into it & in this honest review I’ll be uncovering the truth about how it all really works & outlining whether or not you can actually make any money with it.

What Is Legit Online Jobs?

The Legit Online Jobs website claims to be the number 1 work from home opportunity & it’s supposedly been put together by a guy named Ross Williams, who allegedly went from flat-out broke to generating over $9,000 per month online… All by stumbling across a “secret system”. 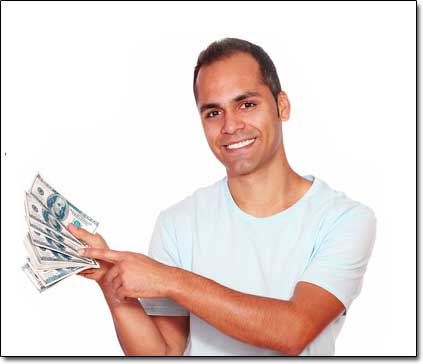 He claims that he was able to take advantage of the skyrocketing online advertising industry to make his money, and you’re led to believe that he’s now going to share his secret with you via his new Legit Online Jobs system.

Ross says that all you’ll need to be able to do to profit via his system is post a couple of adverts online each day for various big companies. He says these companies will pay you as much as $70 per ad you post & that as a result you can easily generate an income of over $50,000 per year.

But don’t go rushing into signing up just yet because I can tell you right from the off that the whole thing is not quite what it seems.

In fact as you’ll soon see our guy Ross Williams isn’t even a real person, and instead of being set out to help you make money online the truth is that the Legit Online Jobs will just take money from you instead.

The whole thing is just a trick, and when I show you how it all works below you’ll be able to see for yourself what’s really going on…

How Does Legit Online Jobs Work?

Basically the Legit Online Jobs website is making on a play on something called affiliate marketing & it’s using this to try & trick you into handing over your cash so that the creators can earn money at your expense.

In short it involves promoting products for 3rd party companies online & getting paid commissions in return for any sales you make. So, for example, you could sign up as an Amazon affiliate & that would mean you’d be able to promote products from Amazon & get paid if anybody clicked on your promotions & bought something.

You simply get a special link to the websites which is unique to you & that’s how your sales are tracked.

But the problem is that the Legit Online Jobs website makes out as if you are literally just getting paid purely for posting the links. It would be great if it worked like that, everybody would be rich! But in reality, this is NOT the case.

Like I say they’re just trying to trick you into thinking that you’ll be able to make lot’s of money really easily but that couldn’t be further from the truth. Affiliate marketing is not a “job” & you do not get paid directly for your time. The truth is that whilst yes, you can indeed make a lot of money with affiliate marketing it could take weeks or months before you get your first commission.

To get access to Legit Online Jobs you’ll need to firstly hand over $34.95 as the whole thing is being sold through a place called ClickBank & you’re told that the reason they charge a fee is simply to maintain their “excellent customer support”.

Reassuringly they do state that they will provide you with $100 bonus credit to cover your start-up fee, but sadly this is just another lie as the “bonus credit” is just paid to you in fake discounts.

You see literally after handing over the $34.95 & signing up you get presented with several other upsells which you’ll have to pay even more money for. Each of them claims to have been “reduced” due to your so-called $100 credit.

However, it’s easy to see that none of the products have really been reduced, and it’s also easy to see that these upsells are just further BS. One of them, for example, claims that it will show you how you can make as much as $50 per hour from paid surveys but it actually just signs you up to a program named Take Surveys For Cash which is a known scam that I’ve previously exposed on this blog.

There is NO way that you will ever be able to earn as much as $50 per hour from paid surveys. I’ve reviewed literally nearly every paid survey company on the internet and I can tell you that’s just total nonsense.

But anyway once you battle through all of the upsells & finally get into the actual program you’re simply left to find out the hard way that there is no “jobs” after all. Instead, you just get access to some bogus training on affiliate marketing.

Like I said earlier in this review affiliate marketing itself is indeed a legit way to make money, but the training provided via the Legit Online Jobs program is total rubbish & there’s no way it will help you get started.

If you truly want to get started with affiliate marketing you should just join a legitimate & proven program like Wealthy Affiliate – it’s there that you’ll get all the proper training & tools you need to get started.

Then Comes The Scam “Coaching Call”…

The real “trickery” happens on the back-end of this whole thing, and it could potentially cost you thousands. You see moments after signing up your phone will start ringing & you’ll be told that a so-called “online business coach” from Legit Online Jobs wants to speak with you.

The coach will talk about the whole system & how money is made online & it could seem to be quite a reassuring call… But shortly after the coach befriends you he (or she) will then talk about a “done-for-you” option.

You’re told that you can have the expert team at Legit Online Jobs create a profitable website for you entirely on your behalf. The website will cost you anywhere between $1,000 and $3,000 (depending how much money you tell them you have) and they guarantee that it will earn you good money.

But the kicker is that the whole thing is just a con. The website they provide you with in return for your money will NOT make you profits as they claim. Instead, you’ll just be a few thousand out of pocket.

The whole thing is very similar to the 30 Day Success Club program that I recently exposed a few days ago. They also promised to provide their members with a profitable site but failed to deliver the goods. It wouldn’t surprise me if the two were actually interlinked (though there’s no way of knowing since the creators of both have kept themselves anonymous).

Is Legit Online Jobs a Scam?

In my opinion yes, Legit Online Jobs is a scam. I mean don’t get me wrong you do indeed get access to some training in return for your money but the whole thing is built on false promises & it’s clear to me that it’s just been designed to make the creator rich, not you.

There are plenty of legitimate & proven places where you can learn how to get started with affiliate marketing such as Commission Academy so there is simply no need for you to waste your time or money on BS programs like the Legit Online Jobs program.

If you sign up to it I can assure you you’ll just find yourself disappointed because you don’t really get access to “easy high paying jobs” like they promise & therefore for that reason I won’t be recommending it to you.

But hopefully, after reading this review you can see why I’ve come to the conclusion I have & hopefully my review here has also helped you save some money. If you do still happen to have any further questions then don’t hesitate to leave them below & I’ll do my best to get back to you as quickly as I can.