The 30 Day Success Club has allegedly been put together by a lady named Debbie Joven & you’re promised that the program will enable you to begin making money online in just a mere 30 days or less, even if you’re totally brand new. 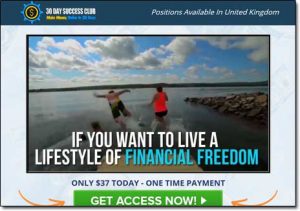 But is it actually legit or will the 30 Day Success Club scam you & just end up leaving you with less cash instead?

Thankfully if that’s what you’ve been trying to find out you can rest assured that you’ve landed in the right place because I’ve taken a closer look into it & in this review, I’ll be uncovering the truth about how it all really works… And of course whether or not you can really make any money with it.

What Is 30 Day Success Club?

So as I briefly touched on above the 30 Day Success Club program has been put together by a lady named Debbie Joven, or at least that’s what you’re told on the website anyway (but you’ll shortly see that’s not true) and it claims that it can enable you to make money online in just 30 days or less.

You’re led to believe that all you need to do is follow a few simple steps inside of the system & that if you do you’ll be able to achieve a passive income which could potentially pay you around $1,000 per day or more.

Debbie says that it’ll allow you to live the lifestyle of your dreams & that you’ll be able to do whatever you want, whenever you want… Which obviously sounds great – but it also sounds too good to be true.

And sadly the harsh reality here is that the 30 Day Success Club is indeed exactly that – too good to be true.

There is simply no way that the program is going to help you make money as easily as it claims & to be honest you’d be lucky if you managed to make any money at all… It’s more likely that you’ll just lose money instead.

But obviously I don’t expect you to just take my word for that, after all, I appreciate that you were probably hoping that the system would work for you… So instead I’ll explain how it all works below so that you can see for yourself what’s really going on here…

How Does 30 Day Success Club Work?

Well, the first thing that I want to stress again just in case you happen to have jumped straight down to this part of the review is that it sure as heck doesn’t work as promised and that rather than make you money the likelihood is that the program will just end up costing you money instead.

The reason for that is because as opposed to the program being designed to help you make money like it claims, in reality, it’s just been designed to make it’s creator wealthy at your expense instead.

And by the way, the real creator is NOT named Debbie Joven – that’s just a fake alias that’s being used to hide the true identity of whoever’s behind this program, and the reason they’re hiding their identity is that they know it’s a scam.

The reason I know Debbie isn’t the real creator is because the person behind the 30 Day Success Club is also the same person that’s behind the Get a Bitcoin Free program (another known scam) and in that video, you’re told the creator is named Sara Johnson.

Like I say it’s basically just BS to hide the true identity of the real creator & the reason they want to hide their identity is so that they can just keep on launching different scams under different names without a trace. 2 of the other programs I recently reviewed, the Millionaire’s Brain Academy & Tube Crusher did exactly the same thing.

And as you can probably guess that also means that Debbie’s story is totally fake too. The whole thing about her husband dying in the military & her falling into debt, as a result, is nonsense, and in my opinion, it’s disgusting that the creators are using such a story to emotionally trick you into purchasing the program.

So What’s Really Going On?

It’s actually the exact same way that I make money online & it basically involves you promoting products for 3rd party companies. You get a special unique link & you earn commissions on each of the sales.

The problem, however, is that the training provided through the 30 Day Success Club program is just total BS. There is no way that as a newbie, or even as an expert that the system will give you any value.

I mean don’t get me wrong you do indeed get access to some training which is good in one respect because many of the scams don’t even give you access to anything at all… But the whole thing is just way overhyped.

If you really want to make money with affiliate marketing it’s important that you have a solid, legitimate & proven training program like Wealthy Affiliate. The 30 Day Success Club program is just total BS.

A Rundown of The Process…

If you were to sign up to the 30 Day Success Club program for $37 (which I don’t recommend) then what you’d get access to is a “done-for-you” website builder. You’re led to believe that it will consist of everything you need to begin making money but as an experienced online marketer, I can tell you that it doesn’t.

You see the website that you’re provided with is just total junk & it’s merely designed to promote the 30 Day Success Club to others.

This would then set you up with a very basic website & you’re led to believe that people would start coming to the website, clicking the link, signing up & making you money… Though there’s no way it will really work like that.

You simply cannot just expect to launch a website & start getting people coming to it… I mean heck if that really happened then everybody would be getting rich online but sadly it doesn’t.

The truth is anybody can easily build a website, but getting people to the website (which is known as getting traffic) is the hard part. That’s the bit that most people struggle with.

So it’s all fair & well the 30 Day Success Club program setting you up with a website, but without traffic, you ain’t gonna make a penny & that’s the big problem with it.

Is 30 Day Success Club a Scam?

I don’t often like calling things a flat-out scam, instead I always try to find some sort of positives within a program that make it “kinda” worthwhile for the money, but here with this system there really is none.

It’s clear to make that rather than being set out to help you make money like it claims, in reality, the 30 Days Success Club program is purely just set out to make it’s creator wealthy at your expense instead.

The website is built upon lies & false hype & there is simply no way that you’ll make the amounts of money promised (or even any money at all for that matter) so for that reason, I am going to say yes, in my opinion, it’s a scam.

If you really want to make good money online from affiliate marketing then you should just join a free, legitimate & proven program like Commission Academy instead which contains all of the proper training & tools you need to get started.

I’d recommend staying away from “too good to be true” systems like the 30 Day Success Club because they are really just no good, but hopefully, my review here has helped you dodge it & save some cash.

If you do happen to have any further questions or comments about it though then don’t hesitate to leave them below & as always I’ll do my best to get back to you as quickly as possible.