The Massive Internet Profits website claims that through its program you can start earning “massive” online commissions of up to $5,500 from the comfort of your very own home, and it claims that you can do all of this very easily too even if you have no prior experience at making money online… 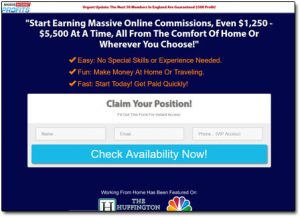 It even claims to have been featured in several high profile publications such as The Huffington Post, USA Today & Forbes… So what’s the deal here, is it actually legit & can you make money or is Massive Internet Profits a scam?

Thankfully if you’ve been thinking about trying it out you can rest assured that you’ve landed in exactly the right place to find out the answers to those questions because in this Massive Internet Profits review I’m going to be uncovering literally everything there is you need to know about this program.

What Is Massive Internet Profits?

Well at a glance Massive Internet Profits almost seems like a dream come true. The website leads you into believing that just moments after signing up you’ll be on your way to making huge commissions online with relative ease, even if you have no prior experience.

You’re told that it’s easy, fun & fast, and that through the Massive Internet Profits system you can make money from anywhere in the world. Not just any kind of money either, you’re led to believe you can earn commissions of between $1,250 – $5,500 per day & they even claim to guarantee $500 of profit just for signing up.

And sadly that’s because it is.

Yep, unfortunately the Massive Internet Profits system is actually nothing new. It’s just a re-hashed version of a scam that I’ve seen several times before launched under various different names.

Some of the previous names I’ve seen this launch under include the Ultimate Online Success Plan, Home Biz Now & the Turnkey Business System. Despite the different names & appearance, behind the scenes all of them are almost identical.

It’s been purely designed to get you to buy into a high-ticket (expensive) business opportunity named MOBE – and whilst MOBE itself is technically legit, the Massive Internet Profits system sells you into it on a complete pack of lies.

How Does Massive Internet Profits Work?

OK so after landing on the Massive Internet Profits website & watching the video you will likely be hyped up about the potential opportunity of making lot’s of money through this program, and that’s exactly what they want…

But in reality things just aren’t quite as they seem.

For instance remember when I said that this system claims to have been featured in several high profile publications such as Forbes, USA Today, The Huffington Post & CNN? Well that’s a big fat lie!

But they’re able to get away with that lie by a technicality – you see if you look closely they don’t actually claim that the Massive Internet Profits system has been featured in these publications (despite giving that impression the way they have published their logos on their site). They actually say that “Working From Home Has Been Featured On”…

And of course working from home has been featured on all of these channels, because it is entirely possible to make money online, just that the likelihood of you doing so by going through the Massive Internet Profits system is very little indeed.

It’s clear they’ve just put that on their website in the hope that you won’t notice that it says working from home – they know that you’ll naturally assume that the MIP website itself must have been featured in those places… They’re trying to build your trust with deceit.

And it doesn’t end there…

The other lie you’re told is that the process will be quick & easy. You’re literally led to believe that you can almost just sign up & start making money right away without really doing anything which in reality couldn’t be further from the truth.

Yes you CAN make money through MOBE (the program you’re being sold into), but it will require a lot of time & effort… And I really do mean a lot (I’ll explain why in a moment).

But first I want to point out that it’s not just the lies they tell you that’s the problem, it’s also the truth they keep hidden…

You see if you do happen to go through the Massive Internet Profits website & sign up to MOBE the opportunity will not be cheap, in fact it could see you investing over $50,000 before you even begin to get the ball rolling… And yes, that is not a typo – this program is expensive, but of course there’s no mention of that on the website.

Ultimately though Massive Internet Profits is just sales pitch & after watching the video & clicking the button beneath it you’ll be redirected to MOBE. MIP has likely just been created by an affiliate of MOBE, because if you are to join MOBE that’s how you make your money – by signing other people up to it.

That’s the reason that the website is full of lies & deceit, because honestly the only thing they’re interested in is getting you to part with your cash as that’s how they’re going to be making their money… They’re not really interested in your success.

How Does MOBE Work?

MOBE is a high-ticket online marketing training program. The high-ticket part basically means that it’s expensive – it has a low ticket entry fee (of around $97) but once you’re in you’ll find that the rest of the products (the upsells) cost upwards of $1,000 apiece.

In total the entire product line inside of MOBE costs around $50k and you’ll be required to purchase all of the products in order to become eligible to make money through the opportunity. If you happen to leave a product un-purchased & you make a sale of it then you will forfeit your commissions, instead they’ll go to the next person above you who is qualified on that particular product.

This is why you will likely see a few people flashing big cheques praising MOBE, because the gurus that got in early & are positioned at the top of the chain are earning all the passups that are being sent to them from new people who have joining who have not fully invested themselves in the program.

So for starters you should know that if you really want true success from MOBE you should be expecting to invest around $50k. You should also be expecting to heavily promote the program & recruit others into it because that’s how you’ll be making your money through it.

MOBE is an online marketing training program but throughout the program you’re really heavily sold on the benefits of promoting MOBE itself, so much so that come the end of it that’s all you want to do.

Can you make money promoting it? Sure you can, but it is nowhere near as easy as they make out it will be. It’s certainly nowhere easy as the Massive Internet Profits system makes it out to be.

The other issue here is that realistically whilst MOBE does contain training, it’s quite clear that what you’re selling here is the opportunity to make money – therefore it could kinda get mistaken for being a pyramid scheme & people will likely end up calling you a scammer. Not to mention that the people you will be signing up to it will be potentially investing $50k, so ultimately if they don’t make that money back it will be coming back on your shoulders.

And those are the reasons I didn’t recommend MOBE in my review. I just felt that there’s way too much risk involved (especially if you’re new) and there’s no need to expose yourself to so much risk when there’s free alternatives available like Commission Academy.

Is Massive Internet Profits a Scam?

Honestly I’m going to say that yes, this particular program is a scam. Whilst I don’t believe the program that it sells you into (MOBE) to be a scam, I do believe that Massive Internet Profits is purely because of the way that it sells you into it. It’s clear to me that the creator of this program is only interested in earning himself (or herself) a commission at your expense & nothing else.

So hopefully you can see why I am calling this out as a scam. I just feel that if you do sign up to it you will merely find yourself disappointed because the whole thing is built up on lies. There’s no guaranteed $500 as they promise, it’s not quick & easy, and there’s a lot of investment that they don’t tell you about.

Basically this is a program that you just want to stay well away from. MOBE itself is technically legit but I still don’t recommend joining that because it’s just too risky – if you want to try anything then you should try Commission Academy. That’s a free internet marketing training program & it comes jam-packed with a LOT of training, in fact in my opinion it’s actually one of the best place to learn how to build a real income online.

Anyway hopefully this review provided you with the insight into this program that you were looking for, but of course if you have any further questions or comments please do leave them below.