The Million Dollar Replicator system is a brand new system that’s allegedly been put together by a man named Michael Sachs & it promises that it will provide you with the same secret that millionaires (apparently) use to make their millions. 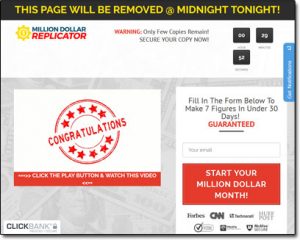 But on top of just providing you with the secret & having done with it, the system also claims it can enable you to actually begin making millions too…

Obviously, that’s a pretty darn bold claim so what’s the truth? Can it really help you to make millions like it claims, or is the Million Dollar Replicator a scam that’ll just con you out of your hard-earned cash instead?

The good news is that you’ve landed in the right place to find out because I’ve personally taken a closer look into this system and I’ll be uncovering the truth about how it all really works, as well as uncovering whether or not you can actually make any money with it too.

What Is The Million Dollar Replicator?

So the Million Dollar Replicator system is a system that claims it can do exactly its name suggests – it claims it can help you to “replicate” the exact same business model that millionaires supposedly all use to generate their millions.

You’re told that it’s all been created by a guy named Michael Sachs & on the website promoting the system he claims that it something unlike the world has ever seen before. He says it’s the worlds first & only guaranteed 100% profit-generating system…

And if that alone wasn’t enough, he even claims that the system won’t just generate you 1 million – oh no, apparently it’ll generate you a million every single month…

And I agree with that – because literally every single money-making system I’ve ever reviewed that sounded too good to be true has actually turned out to be nothing more than a mere get-rich-quick scam.

I can also tell you right from the off that I believe the Million Dollar Replicator too is just yet another scam – but as with all the opportunities I come across I won’t just brush it off as a scam without proof, instead keep reading as I’ll take a closer look into all the same to find out once & for all how it really works… And whether or not you can make any money with it…

How Does The Million Dollar Replicator Work?

Well, all throughout the promo page of the Million Dollar Replicator system you’re told that the whole thing is super easy & that anybody can do it – but you’re not really told about what any of it actually involves.

I mean sure, the website states what it allegedly doesn’t involve – such as not needing a list or product – and it states that apparently other “make money gurus” don’t want the creator, Michael Sachs, to actually reveal the information…

But just what does it consist of? What will you be doing to make money?… What is THE method??

Well here’s the deal – there isn’t a method! The whole thing is just flat-out total BS, and after handing over your cash to sign up to the Million Dollar Replicator system you’ll find out that all you actually get provided with is a basic list of ways to make money online.

And you can actually get access to a list of MORE ways to make money online for free, right here on my blog…

So take it from me – if you handed over your cash to the Million Dollar Replicator system then you would almost certainly find yourself disappointed, and it’s safe to say that there’s no way you will find yourself earning millions of dollars from it.

In fact you’d be lucky to earn so much as a single dollar, let alone millions.

And that’s why if you look very carefully, despite claiming to be a “guaranteed 100% profit-generating system”, the website contains this disclaimer hidden away at the very bottom of the page:

In summary, you understand that we make absolutely no guarantees regarding income as a result of applying this information, as well as the fact that you are solely responsible for the results of any action taken on your part as a result of any given information.

So clearly the system is not quite as guaranteed as Mr Michael Sachs claims it is!

And By The Way, Michael Sachs Isn’t Even Real…

Yup, that’s right, despite the website for the Million Dollar Replicator system explicitly stating that Michael Sachs is the creator & CEO of the whole thing – and even including a picture of him… He’s a phoney.

Michael Sachs is just a pen name that the true creators of the whole thing have made up to hide behind so that they don’t have to reveal their true identities (since they know it’s actually just a scam).

The photo of Michael Sachs found on the website for the system has actually just been pulled from Pixabay, the free image site. It’s just a stock photo of a random businessman – NOT Michael as you’re led to believe…

Therefore you literally can’t believe a single word they’re telling you – and I think this on its own, the fact that they’ve fundamentally lied about the creator of the whole thing, pretty much says that it’s a scam in itself.

Why would ANY legitimate website make up a fake creator?

Literally the only reason would be to try & trick you – which is exactly what the creator (or creators) of the Million Dollar Replicator system are trying to do.

There Is Some “Good” News Though…

Don’t get me wrong, it’s hardly the best news in the world – but if you have found yourself scammed by the Million Dollar Replicator system already prior to landing at this review then getting your money back shouldn’t be all that difficult…

The reason I say that is because I happened to notice that the program is being sold through a 3rd party network named ClickBank, and whilst ClickBank is renowned for selling low quality (and scam) products, the network itself if contacted directly is actually generally pretty good at issuing refunds. 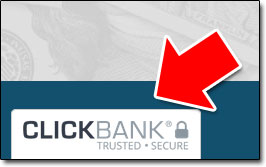 So whilst the creator of the Million Dollar Replicator system might (and likely will) ignore your refund request, if you contact ClickBank directly then you should find that they will actually honour your refund and that you get all of your money back… Which if you’ve been scammed, is pretty good news!

Is The Million Dollar Replicator a Scam?

I hope that after reading my review above you’ve already come to a verdict yourself, as I think it’s quite clear that the Million Dollar Replicator system is indeed just a big fat scam that’s set out to take your cash.

The creator is a fake, the claims are all fake, the people shown in the video are all actors from the website Fiverr – and ultimately the whole thing has just been designed to make it’s creators rich, at your expense.

So it’s safe to say that I will NOT be recommending the Million Dollar Replicator system because if you do buy into it all you’ll be provided with is a list of ways to make money online which you can already access for free right here on my blog.

Plus there is simply no way you will find yourself making millions of dollars via the system – and certainly not per month. In fact, as I said earlier in the review you’d be lucky to make $1, let alone a million.

The truth is though that you can actually make good money online legitimately, it’s just that in order to do so you must be prepared to put in some work. There will never ever be a system that will make you lots of money with ease or on autopilot…

But if you are prepared to put in the work required to make good money then do be sure to check out the Wealthy Affiliate program, as it’s there that you’ll learn exactly how you can get started online – for free.

Regardless though whatever you decide to do, I hope this review here helped you save your hard-earned cash rather than losing it to the Million Dollar Replicator scam, and if of course, you do happen to have any questions or comments then don’t hesitate to leave them below. 🙂