If you are someone who hunts for gigs online to bring in some extra cash you’ll have no doubt stumbled onto some survey sites. 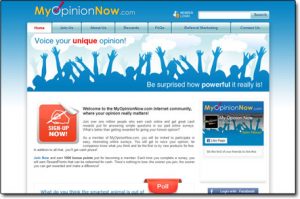 These paid survey sites tell you that you can earn money by simply giving your opinion. My Opinion Now is one such platform. It promises you cash earnings for taking different surveys.

My Opinion Now, like other survey sites, makes a tall claim that it has paid over one million people for giving their opinions. The site is rather unknown to blindly trust the claim, so, we decided to investigate a bit further to see if it’s legit.

Can you make money by simply taking surveys at a third-party survey site? Sure, you can. But how much can you really earn and is it really a reliable side gig platform to count on? Find all your answers and more in our My Opinion Now review below.

What Is My Opinion Now?

The survey site serves as a third-party data collection platform. It allows companies to pitch in surveys to collect opinions and feedback about their products and services or some other topics. For consumers, the website promises monetary incentives.

My Opinion Now tells the consumers that by signing up for this survey site they would become members of a special group. These members can not only earn money for giving their opinions but get free samples to test before the products are stocked in the markets.

It may sound like some sort of a game to you but My Opinion Now uses a points-based rewards system to run its cash-for-survey site. They guarantee rewards for taking surveys and inviting new members to join their community. Sounds fair – and many other paid survey sites work in a similar way.

However, strangely there is no information given about the company behind My Opinion Now in the About Us section of their website. My Opinion Now may have been around for a very long time but it doesn’t make a very sound first impression.

How Does My Opinion Now Work?

I’ll touch more on these surveys & rewards below…

Everyone who signs up at the My Opinion Now website is required to take a First Profile Survey. This survey takes general information about the respondent to assess which type of surveys would be forwarded to them in the future. This is standard practice for survey sites. First profile surveys help them in identifying the type of consumer onboard.

Surveys are emailed to the members of My Opinion Now. This means that you don’t need to check the site again and again for potential offers.

According to the FAQ section on their website, each member gets two surveys per month. That’s disappointing! Nobody really wants to have a side gig for only two offers per month (but you could sign up to multiple survey sites to boost this).

Points-for-rewards system is very common on gig portals in general and surveys sites in particular. My Opinion Now is no different. Members are awarded points for signing up, taking surveys and inviting new people to join the community as well.

Cash earnings are determined by the number of points in the member’s wallet/account. Points are rewarded as soon as the survey is filled and qualified for acceptance. Yes, you read it right – qualification is a necessary condition for earning points and later money.

Points are converted to real value later, as promised by the website but here’s a catch; you need at least 20,000 points in the account to make your first cash withdrawal! Yup, that’s the condition & it sounds like a pretty tall order.

Can You Really Make Money With My Opinion Now?

Sure, you can make money with My Opinion Now after you have collected your first 20,000 points. How much can you earn though? Peanuts, to be honest.

Survey sites generally don’t pay that much per survey but with only two gigs per month, your earnings scale will be stuck at one mark for very long. You mustn’t forget that you may be disqualified from many surveys too. That’s harsh but that’s how it works!

Is My Opinion Now a Scam?

Our investigation revealed that My Opinion Now was launched in 2007 and is an accredited survey site since then. That erases many question marks. However, it’s still very fishy. Survey Police is a web portal that ranks legitimate survey sites. My Opinion Now has a strikingly low number of real-user reviews and a low ranking on this portal. It may not be a scam but it doesn’t have any repute either.

Our My Opinion Now review gives a negative verdict! It may be an accredited survey site it there are concerns about its trustworthiness. It doesn’t promise reliable earnings either. Nobody has the time and energy to earn 20,000 points taking surveys and then hope for cash withdrawals.

And on top of that, I have to admit that I never really recommend paid survey sites in general because they typically pay very small amounts of money in return for your time & I believe that there are much better ways to earn online.

One of my all-time top recommendations for earning online is something called affiliate marketing which can see you getting paid much more handsomely for your time & it’s actually the same way I make most of my money online.

Unlike paid surveys which are only designed to earn you a little extra each month you can actually go on to earn a full-time income with affiliate marketing which is one of the main reasons, I recommend it. It simply involves you promoting products or services & getting paid commissions in return.

The best part is that you can even get started with affiliate marketing for free over at Commission Academy so if it’s something you’re interested in & you’d like to earn more than paid surveys then I’d definitely advise checking it out.

But like I said there are also multiple other ways to earn online too which shouldn’t be dismissed either.

Whatever you decide to do though I sincerely hope that my review of My Opinion Now gave you a good insight into the company & hopefully it has helped you to decide if it’s really the right survey site for you or not.