My Passive Trades is the name of a newly launched money-making opportunity through which you’re led to believe that you can simply sign up, deposit some money & then enjoy a nice return of 1.5% daily. 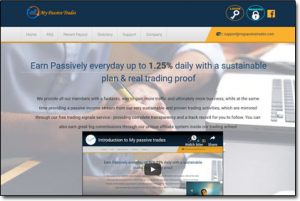 But if you know anything whatsoever about investing then you’ll likely know that an ROI of 1.5% per day is insanely high…

So what’s the truth about this opportunity? Is My Passive Trades legit or is just another scam to avoid?

Well, I’m really glad that you came here to this review of My Passive Trades before you signed up & invested money because I can immediately tell you right from the off that in reality, the whole thing is extremely risky.

What Exactly Is My Passive Trades?

My Passive Trades is a newly launched rev-share website & in theory, the concept is simple. You’re told that the person behind My Passive Trades (Darren Bradbury) performs successful trades & runs a profitable advertising business.

This supposedly generates him a lot of revenue & you’re told that you can get a “share” of it by investing in his My Passive Trades program. In turn, your investments will allegedly help him to grow his business.

You invest your money, he pays you a daily interest of 1.5%… Allegedly.

And in case you have any doubts about his program he has even gone to the lengths of putting together a YouTube video in which he claims to “prove” that the trading is real & the company is truly generating solid profits.

The problem though is that it’s not, and in actual fact, the whole thing is actually just a Ponzi scheme (also known as a scam).

This means that if you do happen to invest money via My Passive Trades the likelihood is that you’ll lose it & the reason for that is because in reality it’s only geared towards making 1 person wealthy, which is Darren Bradbury himself.

How Does My Passive Trades Work?

So, in reality, the truth is that there isn’t really any “trading” going on like Darren Bradbury claims there is, and instead the money coming into My Passive Trades is simply coming from the new members that are signing up.

This means that the people who join are reliant on new members signing up after them in order to recoup their investment (and potentially earn a return) as it’s the money that the new members are paying in that’s getting paid out to them.

The problem with this though is that not only is it illegal, but it’s also very risky because there’s no telling when new members will stop signing up & it often happens without any warning whatsoever.

When it does, the people who had money invested lose it… So instead of seeing a “guaranteed return” they end up just actually losing money instead (whilst Darren Bradbury profits at their expense).

And that’s the reality of these schemes – they’re only geared towards making 1 person wealthy which is the person who has created them – and potentially their close associates who they “got in early”.

Everybody else that joins is essentially just being “used” to make those guys wealthy, and the lower down the chain you are the higher the risk you have of losing your money.

I’ve seen these things time & time again & they all end up disappearing without a trace. Some past examples include Profitable Morrows, Supreme Power Coin & BitsTrades… They’re nothing but bad news.

Yes, the promised ROI can be tempting – but the reason it’s so high is because it’s so risky.

If you know anything whatsoever about investing then you’ll know that a typical “relatively” safe yet high return is around 5% per year… So anything above that & you should know there is something risky going on.

A promise of 1.5% per day as made by the My Passive Trades scam is just ridiculous.

But What About The Trading Proof?

The trading proof is forged – there is absolutely no trading going on whatsoever… It’s just something that the creators of these programs always try to claim to try to make you believe that there’s actually a genuine source of revenue coming into the company.

They want to try to hide the fact that they’re just running a Ponzi scheme to try & bide themselves some time before they get shut down by the law enforcement agencies and to try to encourage more people to join.

Ryna Holdings was another similar scheme I previously exposed which made similar promises of “proven trading”… Of course, it all turned out to be a con, and the same goes for My Passive Trades.

I mean think about – if somebody had truly “cracked the code” when it comes to trading then why on earth would they need investments from other people to earn more money (like Darren claims)?

The answer is simple – it’s because like I just mentioned there is NO money coming from any trading. It’s all just a made up ploy to try to make you believe that it might actually be legitimate, but it’s not.

And it appears that right now the My Passive Trades scheme has likely hit its “peak” of interest (as shown from the chart below) meaning that for new investors getting involved now it’ll likely just turn out to be a loss: 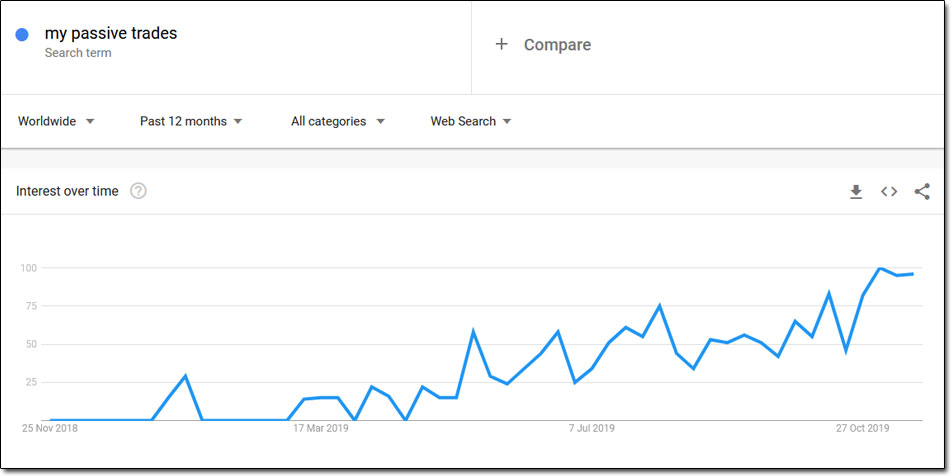 My Verdict – Is My Passive Trades a Scam?

Yes, it is, there’s absolutely no doubt about it – My Passive Trades is a flat-out Ponzi scheme which is tricking people into investing money by promising them that they’ll be able to earn guaranteed returns which simply isn’t true.

In reality, the whole thing is just geared towards making its creator wealthy at the expense of those that join & sadly the majority of the people who join My Passive Trades will just end up losing their investments.

Those types of Ponzi schemes are made to seem attractive & it is easy to see how people get tempted into trying to them out but they should be avoided at all costs because there are much better, legitimate ways to make money.

I’ll also point out here that one of the best methods, in my opinion, is something called affiliate marketing, and the good news is that it doesn’t involve any risk whatsoever. It’s actually the same way I personally make money online.

Affiliate marketing is a great way to earn online because it simply involves you promoting real products or services & getting paid commissions in return. Plus the amount you can earn with it is totally uncapped.

So if you’d prefer to do something like that instead then be sure to check out Commission Academy as in my opinion that’s one of the best places that’ll help you get started with it (and explain more about how it works).

Or alternatively, check out these other options on my top picks page.

But whatever you decide to do I just hope that my honest review of My Passive Trades here has given you a good insight into what’s really going on with the platform & I hope it has helped you to save your cash.

If you still happen to have any further questions or comments then, of course, don’t hesitate to leave them below. 🙂