Ryna Holdings claims to provide the best investment solutions on the market & their website boasts that if you invest your cash with them then you can expect to earn annual returns of up to 620%. 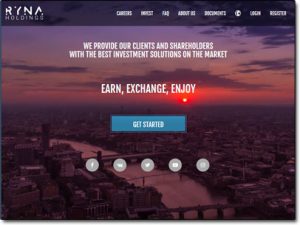 But obviously a promised ROI of 620% sounds insane – I mean from a legitimate company a fixed ROI like that is just totally heard of, so what’s the deal here? Is it actually legit or is Ryna Holdings a scam?

Thankfully you’ve landed in exactly the right place to find out because I’ve taken a closer look into this company to get the truth & in this review, I’ll be uncovering everything there is that you need to know, including how it really works & whether or not you can make any money with them.

What Is Ryna Holdings?

Ryna Holdings claims to be an investment firm based out of the UK & it reckons it can see you generating fixed annual ROI’s of up to 620% on your investments, which obviously is a pretty crazy figure.

It might not seem so extreme on a small amount, but if you invested £100,000 with them then that figure would mean you would see yearly profits of £620,000 – over half a million pounds… That’s pretty crazy.

Now if it were true, then obviously everybody would be doing it… Who would still be going to work when they could just invest their life savings into something like this & earn hundreds of thousands per year?

Obviously there’s gotta be a catch… And by the way, I’m definitely not recommending you should invest your life savings into this place!!

The catch is that the company is much likely a Ponzi scheme – which means overall it’s completely unsustainable & is ultimately likely to leave the majority of the investors parted with their cash.

That’s because these types of schemes are only really designed to make the creators wealthy – and those who get in super early may see a little bit of income from it too, but everybody else is just being “used” for these folk to get rich.

You know as the saying goes, “if it sounds too good to be true then it probably is”, well I feel like that definitely applies here. Whilst it all sounds good in theory & seems like an easy way to earn money, logically none of it adds up.

How Does Ryna Holdings Work?

Ryna Holdings claim that the funds they payout to members are generated through cryptocurrency investments & mining partnerships – but there is absolutely no proof on this shown on their website.

And by the way, in case you don’t know a Ponzi scheme is basically where people who invest are merely passing money up to the people who’ve invested before them just like a pyramid scheme.

Eventually (and very quickly) there becomes too many people on the bottom so everybody stops earning & the company collapses. Bitconnect and USI Tech are 2 good examples of collapsed Ponzis that recently collapsed.

Obviously, nobody wants to be involved with a Ponzi because they’re solely designed to make the creators rich so the creators go to great lengths to produce some spiel to cover up what’s really going on…

It looks like that’s what’s happening here with Ryna Holdings. Everything on their website is literally just spiel as far as I’m concerned – none of it proves the business model to be legitimate, and I certainly wouldn’t trust them with my money.

Are They Really Based In The UK?

But this is something I always get very suspicious about when a company stresses its location several times as Ryna Holdings does. The reason for that is because I’ve seen several companies, such as Profitable Morrows for example that flat out lie about their location in an attempt to build trust.

On top of that, the company is allegedly operating out of a small residential apartment… Strange for a company claiming to turn over millions!

Is Ryna Holdings a Scam?

Well, this is entirely based upon whether or not their “trading” and “mining partnerships” are legit but there’s no proof of that & as a result I certainly wouldn’t be investing any money with them, it’s too risky.

Couple that with the fact that they boast crazy ROI figures & push a recruitment scheme, the whole thing just schemes Ponzi scheme & I suspect that’s likely what it is, so yeah it definitely looks like a scam.

The whole thing is just way too suspicious – and without a license number or any signs of regulation, your investments are not protected at all so there is a massive chance you’ll end up losing your money.

I appreciate that it seems like you can make easy money through Ryna Holdings but honestly in life, there is no such thing as easy money. If you really want to make money properly then you will need to put in some work. The good news is that it’s certainly possible & there are programs, like Commission Academy for example that can show you how to get started earning a REAL income online.

So overall I’m going to be warning you against signing up with Ryna Holdings because honestly if you do the likelihood is you will lose your money, not make any. If you do happen to have any further comments or questions then feel free to leave them below.