Supreme Power Coin is one of the latest cryptocurrency-based make-money opportunities to launch & it makes extremely bold claims to it’s members, such as promises of 5% weekly returns. 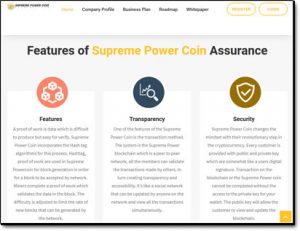 However if you’ve spent any amount of time looking at this type of thing then you’ll know that the promise of 3% per week is an extremely high ROI, so what’s the deal here?

Is it actually legit or is Supreme Power Coin a scam?

Thankfully you’ve landed in the right place to find out as I’ve done the digging & in this review, I’ll be uncovering everything there is you need to know, including how it all works & whether or not you can really make money with it.

What Is Supreme Power Coin?

You’re led to believe by their website that you can simply invest in the Supreme Power Coin & enjoy guaranteed high returns of up to 5% per week. Plus on top of that, you’re said to be able to earn even more money by recruiting others into the scheme too…

And this is where it all starts to sound very suspicious.

At first, I was wondering how they were able to promise such high returns but after seeing that they were also operating a recruitment scheme I realized that the likelihood is that investments getting paid in by new members are merely getting distributed out between older members.

This of course would make it a Ponzi scheme, which is totally illegal. Sadly you have to be very careful when it comes to cryptocurrency opportunities because the transactions are untraceable & as a result, there are many of these new Ponzi schemes launching.

Last week alone I exposed two others – BitsTrades & Falcon Coin. It’s safe to say that when it comes to this sort of thing it pays to be careful, and to be honest, I tend to personally avoid anything that contains both investing & recruiting since it generally always turns out to be bad news.

How Does Supreme Power Coin Work?

Well, the concept is that the creators claim to have developed a coin which they intend on using to rival that of Bitcoin. They believe that in the future everybody will be using their coin instead of the others… This is essentially the main concept of any new cryptocurrency launch.

Usually, they give some sort of unique spin on as to why people will be using their coin, but not Supreme Power Coin. To be honest I can’t see anything outstanding about the coin & it’s not yet even listed on any of the exchanges – this only reaffirms my suspicions that I mentioned above.

Anyway, the creators of Supreme Power Coin claim that the coin will be increasing in value so significantly that they can afford to pay out returns on investments of up to 5% per week, which is a crazy amount of money.

Now before you go rush and you do it, understand this – the reason they’re paying out such high returns is that the risk is immense, and I seriously mean immense. The odds are that you will lose money, not make it.

You see with such high returns from a coin that’s not even listed on any exchanges it’s clear as day there’s an underlying Ponzi – and if you know anything about Ponzi’s you’ll know that they’re completely unsustainable. Eventually, they will collapse & that could happen at any moment in time.

So, back to the investment – if you invest $5,000 you will make $250 per week. This means it will take 20 weeks before you even make your money back, so you will have to have your funds held up in there for 20 weeks at least & at any moment during that time the company could just disappear.

And if you think it won’t happen, think again – it recently just happened with BitConnect, one of the largest cryptocurrency investment schemes around. Thousands (if not millions) of people had their investments stolen.

Anyway, on top of just investing, since the whole thing relies on new people coming in you’ll also be encouraged to actively recruit people into the opportunity too. This will likely see you pestering friends, family, colleagues etc to “get in on it”…

Whenever I investigate opportunities like this one I often come across various red-flags, but I can’t say I’ve ever come across any red-flags quite so crazy as the ones found on the Supreme Power Coin website.

The founder is allegedly pictured on the website & you’re led to believe he’s been working within the cryptocurrency space since 2014… The funny thing is the so-called founder pictured is actually Jay Osmond, a famous musician.

Surprise surprise the “team” pictured are all fake too…

But it was the testimonials that really got me… I mean take a look at this:

How random! It’s clear that the creators of this website just wanted to get the money-making opportunity up & running so quickly that they couldn’t even be bothered to finish off the website.

On top of that, there is absolutely no contact details or information on whoever is behind this operation. That is always the biggest red-flag you can come across when looking into an investment opportunity.

If there are no details, don’t invest – it’s as simple as that.

Is Supreme Power Coin a Scam?

Despite Supreme Power Coin trying to pass themselves off as a legitimate cryptocurrency operation I think it’s clear as to what’s really going on here. The whole thing totally resembles a Ponzi scheme.

The website is vague, the coin isn’t even listed on exchanges, the returns promised are just far too high & to top it all of the company provides absolutely no information as to who runs the show…

The whole thing just screams bad news in my opinion & I’d advise that you stay away from it. Sure, you could potentially see returns from something like this but it’s much more likely that you will only end up losing money instead.

So overall I’m going to be giving the Supreme Power Coin program a big thumbs down & I certainly won’t be recommending it. As far as I’m concerned it just looks like a Ponzi scheme, something you’d definitely want to steer clear of.

If you do happen to have any further questions or comments though feel free to leave them below.