Falcon Coin is one of the latest cryptocurrency lending platforms to launch following the crash of Bitconnect & it claims that its members can see whopping 46% monthly returns on their investments by merely “lending” their cash to the creators of the coin. 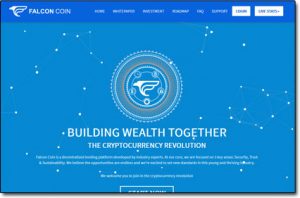 However when it comes to this type of thing it’s always wise to be super careful because the majority of these crypto lending platforms are nothing but bad news – so what’s the deal in this case?

Is this one legit or is Falcon Coin a scam that’ll just part people of their cash like Bitconnect did?

Well, you can rest assured that you’ve landed in exactly the right place to get the answer to that question because I’ve done the digging & in this review, I’m going to be uncovering everything there is you need to know… Including most importantly whether or not you can really make money with it.

What Is Falcon Coin?

As I very briefly touched on above, Falcon Coin is a newly launched cryptocurrency “lending” platform. The idea is that you can sign up, invest in Falcon Coins & then “lend” these back to the creators who will move your coins into their volatility software & generate profits on your behalf.

The website states that you can get started in just 2 minutes and that you can see returns of up to 46% per month. What I will point out there is that from my experience that is an insane ROI claim… Usually, when companies make crazy claims like (especially when it’s a fixed ROI) there’s often something untoward going on.

In this particular instance, I suspect that there could possibly be an underlying Ponzi scheme at hand like there was with Bitconnect – that’s why I put the word “lending” in quotes above because there is absolutely no way of telling what they’re actually doing with your “borrowed” funds.

I’ve reviewed hundreds of automated trading systems and despite every one of them boasting bold claims, they all turned out to be scams. A couple of examples that spring straight to mind are the Bitcoin Advertising & BTC Robot 2.0 systems.

Just think about it, if such a system was real & could generate profits like this for everybody who decides to deposit funds then nobody would be working a job anymore… The world would end up in chaos!

That’s why in my personal opinion it can’t be real.

And the problem here is that this is what the whole Falcon Coin system is based upon – it’s based upon their volatility system being real. If it’s not, then clearly the whole thing is just a Ponzi scheme & that’s definitely what I’m leaning towards thinking… Otherwise, why are they not openly showing proof of what’s really going on with the money? Why, despite it being your money that’s getting invested can you not watch these so-called volatility trades being performed?

Most importantly why do you have to invest, then lend them money back for them to invest it in their “volatility software”? Surely it would make more sense just to make the software accessible to the public…

As you can see there are several flaws with the theory that they are telling everyone.

How Does Falcon Coin Work?

Okay so the idea behind Falcon Coin (in theory) is actually quite simple – that’s likely why many people are attracted to things like this because they like the idea of making lot’s of money easily.

The problem though is that generally, easy money comes with great risk, in this instance with Falcon Coin I do personally believe there to be huge risks involved. It’s likely that you will lose your money.

You sign up to Falcon Coin & once you do you get access to their member’s area. In the member’s area you are shown how to purchase Bitcoin through CoinBase, which you must do in order to then exchange this for Falcon Coin.

Then, once you have successfully purchased Falcon Coins using the BTC that you bought you are then given the option to lend some of these coins back to the creators of Falcon Coin themselves.

They claim that they will use the funds you borrow them to put into their automated volatility trading software which will then generate profits on your behalf. For as long as you keep your funds invested Falcon Coin claim that they will pay you returns of up to 46% per month.

This means that it will take at least 3 months before you have made your investment back.

That’s an important point to make because when it comes to these types of things generally the longer you have your money invested the more risk there is involved because the more likely the company is to collapse during that period (if it is indeed a Ponzi which in my opinion looks likely).

The issue with Falcon Coin is that the promised ROI is just insane. As far as I can see there is no legitimate way to generate such a large fixed ROI & for that reason, it looks more likely for this to be a big Ponzi scheme.

This would mean that rather than them trading your money in their so-called volatility software they are actually just using your money to pay out members who were previously invested in the program before you. Then they are using the investments from members buying in after you to pay off you… So essentially it’s like a big pyramid scheme which is obviously totally unsustainable & will therefore ultimately collapse.

When it does collapse the people who have money invested will lose that money – that’s why this type of thing is so risky. BitConnect was a program that said the exact same thing as Falcon Coin in that it claimed to be a lending program, but that was proven to be a Ponzi & when that collapsed everybody lost their money.

Is Falcon Coin a Scam?

Well, there is no way of telling for sure, but due to the insane ROI that’s promised, it looks highly likely to be a scam yes. The problem is Falcon Coin is providing absolutely no evidence of what they’re really doing with the member’s money which makes it look even more suspicious… Essentially you’re just having to take their word for it & when it comes to investing that’s not something you should have to do.

On top of that, the founders of Falcon Coin have chosen to keep themselves hidden which is very worrying indeed. This happened with Bitconnect as well & now even after it’s collapse the owners remain untraceable. They do this so that once their scam collapses they can just start another one up without the negativity following them… I’ve seen it many times before & as a result I generally don’t trust things where the owners don’t make themselves publicly known.

So overall it’s safe to say that I won’t be recommending the Falcon Coin opportunity to you because I think the risk with it is just far greater than the potential reward. Yes, the sound of 46% monthly returns might seem nice but that means you will have to keep your money held up there for 3 months before you even make your investment back & that is one very big risk indeed… In 3 months time anything could have happened & if the company goes, so does your money.

If you happen to have any further questions or comments on it then please don’t hesitate to leave them below.