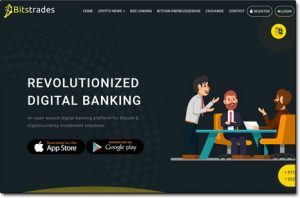 However, when it comes to crypto-opportunities I’ve seen bold claims like these time & time again but sadly they never seem to hold true. So what’s the deal in this instance?

Is it actually legit or is BitsTrades a scam set out to part you with your cash?

Well, I’ve done the digging & in this review, I’m going to be uncovering everything you need to know, including whether or not you can really make money with this site.

In their own words, BitTrades claims to be a “digital banking platform for Bitcoin” – though after taking a closer look at their website & how it all works it seems like BitsTrades is pretty much just exactly the same as Bitcoin (kinda).

As a member of BitsTrades, you’re able to purchase their cryptocurrency BSS & transfer it peer-to-peer just like you like Bitcoin – however, it’s worth pointing out that you cannot buy BSS for USD like you Bitcoin. Instead, you’ll need to buy Bitcoin first & then exchange it this for your desired amount of BSS.

This is pretty typical of these types of coins though because these are not mainstream coins, they’re what’s known as altcoins.

So the question is, since BTC & BSS are seemingly very similar, why would you pick one over the other? What’s so good about BitsTrades?

Well, unlike Bitcoin which is literally just a decentralized currency, the creators of the BitsTradesCoin BSS have built the whole thing around an investment style money-making opportunity.

You’re encouraged by the creators of BitsTrades to invest in their BitsTradesCoin as they claim that it will help you amass easy wealth, but I’m not going to lie the whole thing looks an awful lot like a Ponzi scheme I recently exposed (which since collapsed) named BitConnect.

I won’t be too quick to judge it though, instead, let’s take a look at how it all works…

Well, they’ve compiled an awful lot of spiel on their website which might throw you off, but ultimately it’s clear to see what BitsTrades actually is. It’s another “lending” based cryptocurrency opportunity, similar to Falcon Coin.

BitConnect  (the Ponzi scheme I mentioned above) worked on the exact same principle BitTrades employs – anyway, BitConnect was one particular “lending” opportunity that got very large & after getting noticed by various gov agencies it was quickly forced to close.

However, since the collapse of BitConnect, there have been several other so-called “lending” opportunities starting to pop up. Likely because people have seen just how quickly BitConnect escalated & are potentially looking to cash in on the wave themselves.

Davor Coin is the name of another “lending” opportunity that recently launched.

The problem though is that whilst in theory, these “lending” companies would be technically legit if there genuinely was lending going on, sadly none of them, including BitsTrades have yet been able to provide evidence of this.

Instead, you’re merely left to take their word for it, only if it isn’t true as they claim then what you would actually be part of is a Ponzi scheme, not a genuine investment scheme. This means that your money would be at huge risk.

How Do You Make Money With BitsTrades?

To make money through this method you merely purchase BitsTradesCoins & hold them in a special staking wallet. You’ll begin getting paid interest on the total amount held in your wallet for as long as they’re held there.

The problem with this though is that your money is held up & the interest here is not overly substantial, meaning your money will need to be in for quite a while (or you will need to invest a lot) to see any decent return.

The longer your money is held up with BitsTrades the more chance you have of losing it if during that time it ends up collapsing.

Pretty simple really – you purchase your BitsTradesCoins with BTC, but you can sell them back at any time. The idea here is that you simply buy BSS when the price is low & sell them back when it’s high.

You don’t actually need BitsTrades to make money through trading though, all you need is a wallet, so you can alternatively do this at somewhere like CoinBase.

BitsTrades claim that if you wish you can set up mining equipment & begin mining your own coins, but they don’t give much information away about this & from my research, it doesn’t appear anyone is actually doing it.

I’m not so sure if this “mining” thing is actually a thing at all, or whether they’ve just listed it on their website to make their opportunity seem more legitimate. Either way, it’s clearly not the main focus of the opportunity.

And finally the good old “lending” opportunity (yes, that was sarcasm). BitsTrades claim that if you invest in BSS & then lend it back to them, they will use your money & put it into their automated volatility trading software to generate you profits.

The promised ROI’s here are pretty insane & that’s one of the reasons that makes me sceptical about the whole thing. The other red flag is the fact that they actually claim they have an automated system which can guarantee them profits by exploiting volatility in the market.

This might sound good in theory but over the years I’ve reviewed hundreds of so-called automated trading systems & none of them have ever even managed to generate consistent profits, let alone profits on such a scale as BitsTrades claim.

The biggest problem here is the fact that you’re just left to essentially take their word for it when it comes to the whole so-called lending opportunity. There is absolutely no proof of what’s really going on.

On top of that what concerns me is why you have to “lend” them money for them to trade within their alleged volatility software. If this software does indeed work as they claim then why can they merely not just offer this out to the public so that you can trade via it directly?

The likelihood here is that the trading software isn’t actually legit and that the “lending” scheme is actually just being used as a cover-up for an underlying Ponzi scheme just like we seen at BitConnect.

That’s why in my opinion these types of opportunities are just far too risky. Yes, they may promise a good reward but in order to receive it, you must have your money held up with them & knowing that the company could literally vanish overnight is just something I wouldn’t be willing to do.

Not to mention the fact that the owners leave absolutely no trace, so if they do disappear then your money is likely gone for good. You also have to question why they would leave no trace – rather strange for an investment opportunity don’t you think? Especially when it’s required by law for such an opportunity, yet they don’t show any signs of regulation either… Bad news!

Well, you’re probably aware that given the information I’m provided with I can’t say for certain whether it’s a scam or not, but what I will say is that in my opinion, I feel that it’s certainly looking likely to be.

Regardless though based off all the red flags I certainly won’t be recommending it. There is no way I would ever, ever get involved with an investment opportunity that shows no sign of regulation & provides you with no details of the owners – I wouldn’t advise you to either.

All I can say is that from speculation, and from what happened with BitConnect, this whole thing looks more likely to be a well covered up Ponzi scheme than anything else. I have a feeling that the money being invested in the “lending” platform is merely being paid out to other investors higher up… If this is the case then the scheme will inevitably collapse & leave people out of pocket.

My overall advice is to stay away. Unless they can provide solid proof of a real lending opportunity, and proof that they are indeed regulated then it’s just far too great a risk to be getting involved with something like this.

If you happen to have any further comments or questions feel free to leave them below but hopefully my review provided you with the insight into this program that you were looking for.