The Oil & Gold Stocks system has just recently launched & it makes the bold promise of being able to provide its users with an easy way to generate as much as $300 to $500 daily from oil & gold stocks, all on complete autopilot. 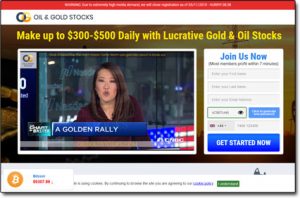 You’re led to believe that no experience is needed, no trading skills are necessary & that you can just sign up for free to “activate your profits”.

But is it really legit? Or is Oil & Gold Stocks a scam that you should just avoid?

Well, I’m really glad that you came here to my review of the Oil & Gold Stocks system before you jumped straight in & signed up to it because I can tell you right from the off that the whole thing is NOT what it seems.

What Is Oil & Gold Stocks?

The newly launched Oil & Gold Stocks system portrays itself as being an automated trading system & its website leads you towards believing that it’ll be able to generate you an automated income of between $300 & $500 per day.

You’re told that the system has been built around a “number-crunching algorithm” & that it gets to the markets 0.03 seconds ahead the rest meaning it can allegedly trade oil & gold stocks with a whopping 99.8% accuracy.

Plus as if all that on its own wasn’t already good enough, the creator (who remains anonymous) even claims that you can use the Oil & Gold Stocks system for free… No cost whatsoever except for your deposit.

But you’ll likely agree with me when I say that it all sounds a bit too good to be true… Doesn’t it?

And you know what they say about things that sound too good to be true – they usually are!

I mean come on, if the Oil & Gold Stocks system could really generate people profits of $300 to $500 per day all on complete autopilot then why on earth isn’t everybody using it?

Why are peoples still working at jobs they dislike when they could earn more using this system?

The answer is because sadly the Oil & Gold stocks system is actually nothing but a scam & I can say that with so much confidence because I’ve actually seen this exact same scam several times before under different names.

Some of those names include AI Stock Profits & Cyber Security Profits.

The person behind it simply keeps on changing the name of the scam in an attempt to escape the negative reviews which tell the truth about it (like mine) so that he or she can continue tricking people into joining & parting them with their cash.

How Does Oil & Gold Stocks Work?

So as I’ve touched on throughout this review already, the concept is that you’ll supposedly be able to sign up for free, deposit with the broker that you’re recommended & then “activate” the system in order to begin making money.

However, the concept & the reality are 2 very different things…

You see there’s one very important thing which the person behind the Oil & Gold Stocks system fails to mention & that’s the fact that he or she is actually affiliated with the broker that you’re recommended.

This means that if you sign up & deposit, they get paid a big fat commission at your expense.

They also fail to mention that the broker they recommend to you is unlicensed – which means they’re operating illegally & it also means that if you have any problems (which you will) then you won’t be able to get your money back.

So, in short, the reality is that the Oil & Gold Stocks system is all just a big ploy to trick you into depositing with the “recommended” broker so that the person(s) behind it can earn a commission at your expense.

It’s exactly the same as its predecessors – AI Stock Profits & Cyber Security Profits… The only difference is that the name has changed.

And the fact that the broker is affiliated with the Oil & Gold Stocks system PROVES that it doesn’t really work. The reason I say that is because binary options brokers (which is what you’re recommended) only make money when you lose money.

So why on earth would a broker that only makes money when you lose money, pay commissions to the creator of a system which could supposedly guarantee you profitable trades? They wouldn’t – no way.

You see not only does the Oil & Gold Stocks system trick you into depositing, but it also tricks you into thinking that you’re profiting so that you’ll deposit even more & more money.

The person behind it has developed a phoney system which displays fake profits to make you think it’s working but the system isn’t really connected to any live markets – it’s basically just a video game, the numbers are fake.

This means that sadly people only finally get to realize it’s all a scam when they go to make a withdrawal… But by that point they could have deposited thousands, maybe even tens of thousands.

Unfortunately, though their withdrawal request will get ignored, refused or worse – the broker may trick them into paying even more money to “release the withdrawal” but this is just a further addition to the scam.

For example, there’s the countdown timer at the very top of the Oil & Gold Stocks website which looks somewhat like the screenshot below:

However, what I came to notice is that the counter is totally fake – it’s just a scarcity tactic that’s being used to rush people into signing up so that they feel they don’t have enough time to look for reviews.

The creator knows that if you look for reviews you’ll find out it’s a scam – so he (or she) wants to prevent that.

And the reason I know that the timer is fake is because I actually came across the system yesterday and it said the exact same thing… But now 1 day on it’s still active & the countdown timer date has changed.

On top of that though there’s more trickery because the creator has also decided to pull a load of random news clips and tactically piece them together to make you think that the system has been featured on the news.

In reality, though the system hasn’t been featured on the news – the clips on the Oil & Gold Stocks website are simply talking about oil & gold stocks in general, not this specific system.

In fact, most high profile publications actually warn against binary options trading, like Forbes as shown below:

Is Oil & Gold Stocks a Scam?

The Oil & Gold Stocks system is definitely a scam, there’s no doubt about it… The whole thing is just a phoney that has been designed to trick you into depositing money with an unlicensed broker so that the person behind it can earn at your expense.

So it, therefore, comes without saying that I certainly won’t be recommending the Oil & Gold Stocks system & instead I’ll be advising that you steer clear of it (and any systems like it promising easy riches) because it’s nothing but bad news.

If you really want to make good money online then I suggest you stick with a proven method like affiliate marketing (which is the same way I make most of my own money online)… But you must be aware that it takes work.

The internet does indeed provide many legitimate ways to make money but what you have to understand is that it is not magical. If you could really earn lots of money with little to no work then everyone would be doing it, but they’re not – because it takes real work.

The good news though is that if you are prepared to put in the work to make it happen then there are plenty of legitimate places like Commission Academy where you can learn step-by-step how to get started.

And of course, there’s also this huge list of alternative ways to make money too.

But whatever you decide to do I just sincerely hope that my honest review of the Oil & Gold Stocks system has given you a good insight into how it really works & hopefully it has helped you to dodge it.

If you have any further questions or comments don’t hesitate to leave them below. 🙂