The Oil Profit trading system has just recently launched & it promises to provide you with access to the exact same trading method that the tycoons allegedly use to make billions each year from oil stocks. 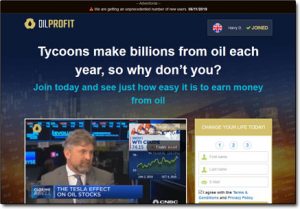 What’s more, is that it even claims that it can make the trades entirely on your behalf & generate your profits on complete autopilot.

But is it actually legit or is the Oil Profit system a scam that you should avoid?

Well, put it this way you’ll be very glad that you came here to my Oil Profit review before signing up to it because I can immediately tell you right from the off that the system is certainly not what it seems.

What Is Oil Profit?

The Oil Profits system is a brand new trading system which claims it can provide you with an extremely easy way to profit from oil stocks even if you’re totally new & don’t happen to know the first thing about online trading.

The creator of the system (who remains anonymous) claims that literally, everything is “done-for-you” so that you can simply sign up, deposit & profit… And he even claims to be giving you access to the system for free.

He claims that because oil reserves are running out, the price of oil is increasing each day which means you’re supposedly guaranteed to be able to generate a healthy profit… According to him at least anyway.

But if it were really so easy then why isn’t everybody doing it?

If you could really just sign up to the Oil Profit trading system, deposit money & generate an automated income then why are people still working at jobs that they dislike for less money? Why don’t they just use Oil Profit?

Well, the reason is because, in reality, Oil Profit is nothing but a scam. The system doesn’t really help you make money from oil stocks at all – it’s actually just set out to take money from you instead.

The reason I know that is because I’ve already seen this scam several times before under various different names. Some of its previous names include the Bitcoin Era App, Gaming Stock Profit & Oil & Gold Stocks.

The person behind the scam simply keeps on changing the name of it in an attempt to escape the negative reviews that surface online exposing the truth about it (like mine here) so that he can continue tricking people into signing up.

How Does Oil Profit Work?

Essentially the Oil Profit system website leads you towards believing that you’ll just be able to sign up, deposit some funds & then begin making money almost instantly after activating the system – but that’s simply not true.

In fact, you won’t make any money at all, let alone instantly.

The reason for that is because the Oil Profit system is just a scam. The website promoting it fails to mention the fact that the creator of it is affiliated with the broker that you’re recommended, which means when you sign up & deposit, he gets paid a commission.

The website also fails to mention that the broker you’re “recommended” (or should I say forced to deposit with before you can get started) is unlicensed. Meaning they’re operating illegally.

And in short, the Oil Profit system is basically just a ploy to trick you into making a deposit with the broker. It doesn’t really work as promised at all – everything you’re told on the site is a complete pack of lies.

The idea is that they want to lull you into a false sense of security. The creator of the Oil Profit scam knows that you’ll likely think it’s a scam – but he wants you to think that you’ll be able to deposit with the broker, “try it” and then withdraw your money if you find it doesn’t work as promised.

But what you’re not told is that the broker and the creator of the Oil Profit scam are in cahoots together – they’re both set out to take your cash & as a result, any money you deposit will be nearly impossible to get back.

And Sadly That’s Just The Beginning…

You might be thinking that after depositing the $250 in order to get started you’ll simply be left to find out the hard way that the whole thing doesn’t really work as promised, but nope – that’s just the beginning of the scam.

You see the creator of the Oil Profit system has actually gone to great lengths to con you out of as much cash as possible. He’s created a fake trading system which is designed to make you believe that you’re actually profiting.

But it’s not – the system is a fake, it’s not really connected to any live markets. It’s basically just a video game & the money you’re “earning” isn’t real – it’s all just a further ploy to trick you into depositing even more cash.

Some people have reportedly lost hundreds of thousands to these types of scams because sadly you’ll only be left to find out its a scam when you actually go to try & withdraw your money & realize it never comes.

The broker will either ignore the withdrawal request, refuse to process it or claim that you need to deposit even more money to release it (which is just an even further addition to the scam).

But What About The News Feature?

One of the reasons these types of binary options scams catch so many people out is by tricking people into thinking that they’ve been featured on the news when in actual fact they haven’t.

The Oil Profit system is no different…

The news presenters are actually just talking about oils stocks & working from home in general – they’re not talking about the Oil Profit system specifically & that’s why if you watch the video closely you’ll see no actual mention of it.

Is Oil Profit a Scam?

The Oil Profit system is definitely a scam, there’s no doubt about it. The whole thing has been built upon lies & deceit & its sole intention is to trick you into depositing money with an unlicensed broker so that the creator can earn at your expense.

Like I mentioned earlier in this review I’ve already seen this same scam before under different names such as Oil & Gold Stocks, Gaming Stock Profit & AI Stock Profits. It’s a complete fake.

The system attempts to lull you into a false sense of security by making you think that you can just “try it out” but what it fails to tell you is that the broker & the creator are both in cahoots so any money you deposit will be basically gone for good.

It, therefore, comes with saying that I’ll be advising you steer clear of the Oil Profit system & instead if you really want to make good money online I suggest you stick with one of these methods that are proven instead.

Or alternatively, you could check out the same way I make money online which is through something called affiliate marketing.

Affiliate marketing is one of my all-time top recommendations for people looking to get started online because it’s easy to understand & the amount you can earn with it is totally uncapped. Plus you get started with it for free over at Commission Academy.

But whatever you decide to do I just sincerely hope that my review of Oil Profit here has given you a good insight into how the system works & I also hope that it helped prevent you from losing any money to it.