The Gaming Stock Profit system is a brand new trading system that claims to be able to provide you with an easy way of making up to $5,000 per day from trading video game stocks, even if you’ve never traded before in your life. 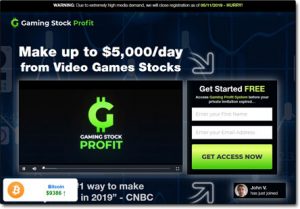 The website promoting it claims that profits from video game stocks have been exploding & that by joining Gaming Stock Profit you’ll be able to get a slice of a $100 billion pie as the system will supposedly cut you in on the cheapest yet most lucrative stocks.

But is it actually legit? Or is Gaming Stock Profit a scam that’ll just ultimately see you losing money instead of actually making it?

Well, I’m glad that you came here to this Gaming Stock Profit review before signing up to it because I can tell you right from the off that it’s not what it seems. In fact, it’s actually pretty darn dangerous.

What Is Gaming Stock Profit?

In short, the Gaming Stock Profit is a newly launched trading system which claims it can provide you with an easy way to cash in big-time from video game stocks – even if you’re brand new to trading & don’t know the first thing about how it works.

The person who’s created the system (who remains anonymous) claims that the whole thing is automated & he claims that the system picks & trades the cheapest yet most lucrative video game stocks on the market to generate huge profits.

According to him using the system you can generate as much as $5,000 per day without having to do a single thing…

You’re told that all you need to do is sign up for free, deposit some money with the broker that you’re recommended and then “activate” the system to have it begin trading video game stocks on your behalf.

From there you’ll allegedly begin generating an automated income, 24/7…

I mean if this thing really works then why isn’t everybody using it? Why are people still working at jobs they dislike for less money if they can simply sign up to Gaming Stock Profit & earn more money without actually having to do anything?

And the answer is because the Gaming Stock Profit system is actually nothing but a scam.

The reason I can say that so confidently is because it’s just a re-hashed version of the Oil & Gold Stocks scam that I recently exposed… And before being called Oil & Gold Stocks it was called AI Stock Profits & Cyber Security Profits.

The person behind it simply keeps on changing the name & appearance a little in an attempt to escape the negative reviews that expose the truth about it (like mine) so that he can continue tricking people into signing up & parting them with their cash.

But how exactly does the scam work? Keep on reading & that’s what you’ll find out next as I explain what’s really going in greater detail…

How Does Gaming Stock Profit Work?

So the “concept” as I mentioned in the previous section of this review is that you’re supposed to be able to simply sign up, deposit with the recommended broker & then activate the system to begin making money…

But that’s NOT how it works.

You see the truth is that the Gaming Stock Profit system is actually just a fake system which has been designed with the sole intention of tricking you into making a deposit with an unlicensed binary options broker.

And the reason the creator of the system wants to trick you into depositing with the broker is because he’s affiliated with them, which means that when you do – he gets paid a big fat commission at your expense.

Sadly though lots of people get caught out by these types of binary options scams because they’re made out to be risk-free.

The people behind them want to lull you into the false sense of security of thinking that you can just sign up, deposit with the broker & then withdraw your money back out if it turns out not to work as promised.

In fact, most people who get scammed by these things actually “thought they might have been a scam”… They just thought that they’d be able to get their money back because they didn’t realize the broker was involved with it.

And That’s Only Just The Beginning…

You might be thinking that after depositing you’ll just be left to find out that it doesn’t really work as promised & that instead of making profitable trades the system just makes nothing other than losses… But no, the scam is actually much more cunning than that.

Instead of letting you find out that you’ve been scammed right after you deposit, the creator has something else in mind…

He has actually gone to the extent of creating a fake trading system which makes you believe that you’re actually profiting. It appears to be making live trades with your money & each one appears to be winning… According to the statistics, it will look like you’re making money.

However, unfortunately, that is all just part of the scam – the system isn’t actually connected to any live markets, it’s basically just a video game & it’s all a trick to get you to deposit more & more money.

Like I said earlier in this review, the system is no different to its predecessors AI Stock Profits & Cyber Security Profits.

The Proof It Doesn’t Really Work

The first piece of proof that it doesn’t work is hidden in the fact that the broker & the creator of the system are affiliated. There is simply no way a binary options broker would pay commissions to the creator of a “winning system”.

The reason for that is because binary options brokers only actually make money when you lose money because they don’t add fees to their trades. This means that if you win money, they LOSE money.

So if a system really could guarantee profits it would put them out of business overnight – meaning that the broker clearly knows you’re going to LOSE money & that’s the real reason they’re paying the creator of the Gaming Stock Profit system commissions for referring you.

On top of that though the Gaming Stock Profit system also uses dodgy tactics to try & rush you through the process of signing up, such as the fake scarcity countdown timer shown at the top of the page.

Here’s an example of the countdown timer I’m referring to:

The reason I know it’s fake is because I actually came across the system yesterday & it said the exact same thing – except it said that yesterday was the day that the registrations would be closing.

In reality, the timer is just a phoney & its sole purpose is to try to rush you into signing up so to prevent you from looking for reviews. The creator knows that if you feel like you have time to look for reviews, you’ll do exactly that & you’ll find out its a scam.

Is Gaming Stock Profit a Scam?

Yes, the Gaming Stock Profit system is definitely a scam. The whole thing is just a fake system that has been built upon lies & deceit to trick you into handing over your cash so that the creator can get rich at your expense.

As I said towards the beginning of this review I’ve already exposed this system multiple times before under different names such as AI Stock Profits & Cyber Security Profits. The creator just keeps changing its name, but the scam remains the same.

It, therefore, comes without saying that I won’t be recommending the Gaming Stock Profit system to you & instead I’ll be advising that you avoid it because if you join it’ll just result in you losing money.

Instead, if you truly want to make good money online you should stick with one of these legitimate methods.

Or even better you could check out the same way I make most of my own money online which is something called affiliate marketing. It basically involves you promoting products or services in return for commissions but the amount you can earn with it is totally uncapped.

The harder you work, the more you can make… And if you’re interested in learning more about it or getting started with it yourself then be sure to check out Wealthy Affiliate which is, in my opinion, the best place to do exactly that.

Whatever you decide to do though I just hope that my review of Gaming Stock Profit here has given you a good insight into how the system really works & more importantly I hope it has helped you to avoid it.

If you still happen to have any further questions or comments though then don’t hesitate to leave them below. 🙂