In this review, I’m going to taking a closer look at the My Online Dream Biz system which is something that’s been launched by a guy named Jason who claims that it can provide people with the easiest way to generate $3,000 to $6,000 monthly commissions from home. 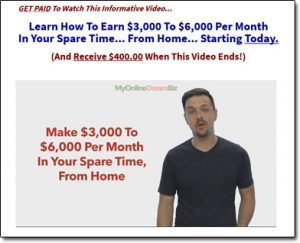 He also says that new members can begin earning immediately (even without any sort of prior online business experience) & that he’ll even give everybody who watches his video $400 just for sticking around.

I’m sure that you’ll agree with me in saying that those are some pretty bold claims, so what’s the deal?

Is it actually legit? Or is My Online Dream Biz a scam that’s merely out to part you with your earned cash? And how’s it all even supposed to work if it even really works at all?

Those are exactly the things I’ll be uncovering right here in this My Online Dream Biz review, meaning if you’ve been thinking about signing up then you can rest assured that you’ve landed in exactly the right place to find out everything you need to know before you do.

What Is My Online Dream Biz?

Basically through this system, you’re led to believe that you can simply copy & paste Jason’s entire online business, the same business that he says is currently generating him $3,000 to $6,000 per month in recurring income whilst only requiring him to work around 45 minutes per day.

And if that wasn’t already good enough on its own Jason also then goes on to state that if you watch his video right to the very end that he’ll give you $400 of his own cash just for sticking around.

This is a similar sort of thing to the My Online Business system which was launched by Matt Driscoll who claimed he would pay you $500 for sticking around & watching his video (which turned out to be a lie).

To be honest, it makes me pretty sceptical – I mean if Jason’s system really is copy & paste simple like he makes out then why’s he so desperate to get you to sign up that he’s willing to pay you $400 out of his own pocket?

This kind of tactic is often the common trait of a scam so it’s safe to say I’m immediately suspicious about this system. I’ve reviewed literally hundreds of scams on this blog & this system raises several red flags.

Surprise surprise after watching the video right the way through you’re left to find out that there isn’t really any $400 as promised – instead, Jason claims that rather than giving you $400 in cash as he makes out, he’s going to give you $400 off the access price of his system.

He reckons that usually, people pay $499 to use his system but that because you watched the whole video you can get in for just $99. I can tell you this is a lie because there’s no way this system has ever been $499 – it’s just a marketing ploy designed to make you feel like you are getting access to some kind of limited discount (which in reality you’re not) to make you more likely to buy the program.

All throughout the video, you’re led to believe that everything is done-for-you & that you can merely purchase the program, hit copy & paste then begin making money immediately without a great deal of work… Sadly whilst this would clearly be great, it’s not the case.

Instead after purchasing the program what you’re actually given access to is a members area that contains a handful of training videos which teach you the basics of affiliate marketing.

And whilst affiliate marketing is a very effective way to make money online unfortunately the training provided through the My Dream Online Biz system is low-quality & unlikely to send you on your way to riches.

Plus on top of that whilst affiliate marketing on it’s is indeed a legit method to make good money online, it’s not something that can make you money without work & nor is it something that will make you rich overnight.

Don’t get me wrong you can certainly make a full-time income online through affiliate marketing (as I do personally) but to do so you will be required to educate yourself & put in the work to make it happen.

Jason’s My Dream Online Biz system has been designed to make one person rich & one person only… Jason! Whilst you could potentially make money through affiliate marketing the training provided through this system is well over-hyped & definitely overpriced, especially when you can get started with affiliate marketing for free at Commission Academy.

If the training was sold for what it was at a much lower price then I could potentially recommend it, but as it is it’s clear to me that it’s been put together to merely part newcomers of their hard-earned cash.

Jason the creator of the My Dream Online Biz system is hoping to take advantage of people who are new to building an online business & don’t really know how it all works or the best way to get started.

What you have to realize is that building a business online is no different to doing it offline, the internet is a great tool but it isn’t magical & it won’t see you making tons of money just by pushing a button as this system claims.

The other downside is that the video or website for the My Dream Online Biz system doesn’t even really go into much detail on how it actually works, it just focuses on selling you the dream of working for yourself from home in the attempt to get you hyped up.

It’s only once you’ve actually handed over the cash & purchased the product that you find out what it’s really about & how it really works but by that point, it’s too late – essentially you’ve been scammed.

And if you think you can get your money back think again. I’ve seen several similar systems launch over the past few months such as the 12 Day Millionaire scam & they each make it almost impossible for you to get a refund once you’ve handed over your money.

Is My Online Dream Biz a Scam?

In my opinion yes it is & therefore I won’t be recommending this program to you today. Ultimately whilst you do get “something” for your money through the My Online Dream Biz system it certainly isn’t what you were promised & I just feel that you are sold on a complete pack of lies.

I feel like if they could get away with giving you nothing they literally would, but the way I see it is that they give you some very basic training purely so that when you try & claim a refund they can turn around & say that they provided you with a product – as rubbish as it may be.

It’s clear to me that if you purchase this product you will find yourself disappointed & you certainly won’t end up making anywhere near the amount of money that they claim you will throughout the video.

The other thing that really annoyed me is the fact that you’re lied to from the very start regarding the whole “$400 for watching the video thing” which is basically just a marketing ploy to draw you further in.

So overall it’s a huge thumbs down from me for the My Online Dream Biz system as I feel it’s something that’s simply out to part you with your hard-earned cash & make the creators rich at your expense.