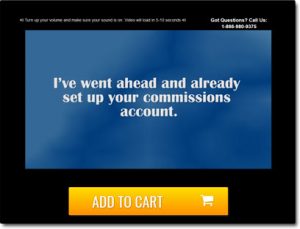 The video promoting the whole thing claims that Mike B has done 95% of the work for you & that providing you can spare 45-60 minutes per day you can see massive success… But it sounds a little too good to be true don’t you think?

So no doubt you’re wondering what the true story is behind it all… Is it actually legit, or is Partner With Mike B a scam that’ll just see you spending money rather than making it?

Well, thankfully you’ve landed in exactly the right place to find out because in this Partner With Mike B review I’ll be uncovering everything you need to know, including exactly how it all works & of course whether or not you can really make any money with it so keep on reading to find out more.

What Is Partner With Mike B?

As I briefly touched on above the Partner With Mike B system has been put together by a guy named Mike Buontempo & it’s one of the latest online money-making opportunities to surface claiming that it can help you to easily earn thousands of dollars even if you have no prior experience of working online.

You’re basically led to believe that everything has been pretty much “done for you” and that all you need to do is sign up & follow a few steps to begin making money, but before you can access these steps you have to hand over a fee of around $37 which might have left you feeling pretty sceptical about the whole thing.

And I’ll tell you right from the off that you’d be right to be sceptical about the whole thing because the program is not what it seems and it’s certainly not as easy to make money with it as Mike B makes it out to be, but you’ll soon see why when I explain how it all works below…

How Does Partner With Mike B Work?

I’ll start out by telling you that the Partner With Mike B system doesn’t work as promised. You’re led to believe that you’ll be getting access to some sort of “automated” system which will pretty much make money for you on auto-pilot with little to no work being required on your behalf but in reality that’s simply not true.

The truth is that if you buy into the Partner With Mike B program all you’re actually getting access to is a 6-step training program that is geared towards teaching you how to make money by promoting CPA offers on Facebook.

It’s basically a tweaked re-release of his previous program which was named Get Paid From FB – a program that received several negative reviews from disgruntled customers who claimed they were misled.

One of the reviews I came across stated that the so-called “30 day money back guarantee” being promised doesn’t really exist & that it’s just a trick to get you to hand over your cash (as shown below):

As to whether or not that report is true or not I can’t personally say (as I haven’t tried to get my money back via the guarantee) but the reason I’m making you aware of it is because you should advise caution & not invest money into the Partner With Mike B program unless you can afford lose it… Because that’s what will likely happen.

The reason I say that is because making money via the Partner With Mike B system is much harder than it is made out to be. Like I say the video makes out as if everything is “done for you” and automated but it’s simply not the case… In reality yes, you could potentially make money by following the method Mike Buontempo teaches but it will require an awful lot of work and trial & error to pull it off…

So due to the misleading claims in my opinion the likelihood is that you will just end up losing money rather than actually making it because you will not be prepared for what’s truly involved in the program.

And as well on top of that whilst Mike B’s method is technically legit, the training is just 6-step therefore it’s only pretty basic & unless you already have a good knowledge of internet marketing prior to joining you’ll probably be left feeling a bit lost… But this is all part of the plan because Mike B offers a “coaching” upsell so you’ll be pushed into spending more money to get more training.

In my eyes it’s pretty crazy because you can get similar training for free at Commission Academy so as far as I’m concerned there’s no need to spend crazy amounts on “coaching” to learn how to get started online.

But Anyway, Here’s How It All Works…

So basically it’s one of those “sign up to this program then make money by selling the same program to other people” type things (kinda like MOBE).

Personally it’s not a business model I’m particularly fond of (for obvious reasons) but it is technically legit & you can make money from it… However as I mentioned earlier in this review it will take a lot of work (and investment) to do so… Money is not just going to fall into your lap like the promo video makes out it will.

Generally the harder the task the more you’ll be paid – so whilst an email submission might only pay around $0.50 to $1, something like a loan application might land you a nice commission of $50 upwards.

There’s certainly money to be made with CPA marketing that’s for sure but the problem with the Partner With Mike B program is that is focuses on paid advertising which costs a lot of money and involves a lot of trial & error… This means that to even stand a chance of making money you’ll have to start out with a pretty large budget & you should know that there’s absolutely no guarantee you’ll “crack it” and make anything back.

Paid advertising sure seems easy (and Mike Buontempo certainly pushes it as being easy) but in reality it’s very difficult. You could spend thousands without turning a profit & sadly most people do.

Like I mentioned earlier in this review it’s better to start out with a free program like Commission Academy where you can learn the ropes of marketing & get all the tools you need without having to invest a load of money upfront.

Is Partner With Mike B a Scam?

Well it’s not a scam as such since you can technically make money with the method that Mike Buontempo teaches through the program, however in my opinion the sales page for it is very misleading & making money with it is much, much harder than it’s made out to be.

As I say the likelihood is that if you sign up to the Partner With Mike B system you’ll probably just end up spending more money than you ever actually manage to make because realistically the whole thing is just geared towards making Mike B money.

So it’s not a scam, but as the same time it’s not going to be something I’ll be recommending because in my opinion I don’t really feel like it gives you a great deal of value & it could end up costing you a lot of money.

The better option as far as I’m concerned would be to just sign up to Commission Academy where you can get started & get the help you need for free. In my opinion that’s a much better places for newbies.

But anyway whatever you decide to do hopefully this review gave you a good insight into how the Partner With Mike B program really works. If you do happen to have any further comments or questions though then of course don’t hesitate to leave them below & I’ll get back to you as soon as possible.