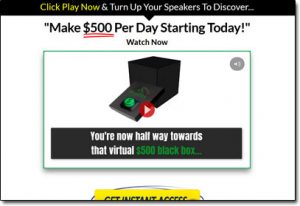 You’re literally told that you don’t need to do a thing & that the system will make all of the money entirely on your behalf… But is the so-called black box actually legit or is Point To Click Profits a scam that you should just avoid?

Well thankfully you’ve landed in exactly the right place to find out as I myself have personally taken a closer look into it to see if there’s any substance to it & in this honest review I’ll be uncovering everything you need to know, including whether or not you can really make any money with it.

At a glance it might seem like the Point To Click Profits system is a dream come true as it basically promises that it will provide you with easy, automated & unlimited wealth from online e-commerce sales… Even if you’re totally brand new.

But there’s one thing, which is that the whole thing just sounds too good to be true, don’t you think?

And you know what they say about stuff that sounds too good to be true… It usually is!

I mean if this Point To Click Profits system really worked as promised then why isn’t everybody doing it? Why are people still working still working their jobs if they can just click a button & get rich?

The answer is because sadly the Point To Click Profits system doesn’t really work as promised. It’s actually nothing but a scam, and if we take a closer look at the so-called “black box” shown in the Point To Click Profits video (shown below) then we can see that it’s actually just a re-hashed version of the Copy & Paste Commissions scam that launched a few months back: 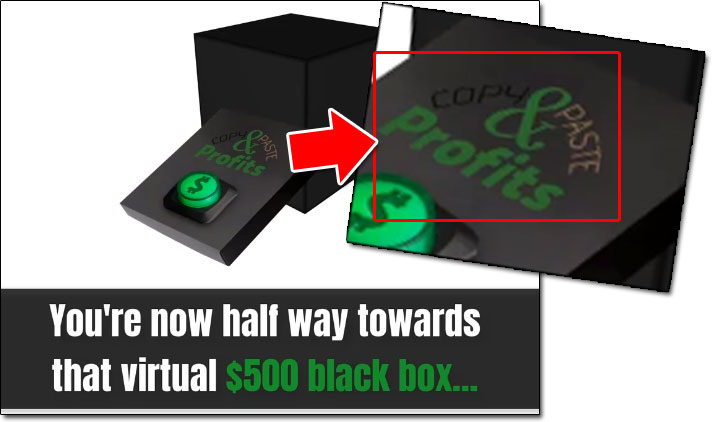 But I appreciate that you likely won’t want to simply “take my word for it” when I say that, after all I understand that some of you reading this review may have been really hoping that the Point 2 Click Profits system was going to work for you…

So instead keep on reading & I’ll explain below exactly how it all work so that you can see first-hand for yourself what’s really going on & why this thing likely won’t really help you to make any money like it claims. 🙂

All throughout the sales video you’re basically told that the Point To Click profits system provides an automated, hands-off way for you to begin making lots of money online… But that couldn’t be further from the truth.

There is no black box, and there is no automated system – instead after signing up all you get is some very basic training on a method called dropshipping, which is basically where you source & sell physical products online through sites like Amazon & Shopify.

And whilst the method in itself is technically legit, the training provided via Point To Click Profits sucks & there’s no real chance of it helping you to see success… Instead you’ll just find yourself spending more than you actually ever make.

But to be honest even with proper dropshipping training (like that provided through Amazing Selling Machine) I still don’t really recommend it as a good way to make money online, because it’s expensive to get started with & involves a lot of risk.

In my opinion there are many better alternatives, such as affiliate marketing which is actually the same way I personally make most of my own income online.

You see rather than sourcing & selling products (and handling sales/refund) like you have to do with dropshipping, all you need to do with affiliate marketing is connect people with the products that they’re looking for, and then you get paid a commission if they go on to make a purchase.

So as an example you could become an affiliate of Amazon which would mean you’d be able to earn commissions from any of the products that are found on their website. You simply get a unique link to them to share & if somebody clicks it & buys something, you get paid… Just like I’ve shown below:

And just in case you’re still contemplating “trying out” Point To Click Profits, I know there’s something else you’re probably wondering, which is…

Can You Make Any Money Point To Click Profits?

Point To Click Profits clearly makes some extraordinary claims, such as being able to make $500 per day… And whilst it is indeed possible to actually make that kind of money online, sadly it is not going to happen without putting in a lot of work.

So when Point To Click Profits says that you are going to earn all of that money on complete autopilot, they are lying 100%.

But can you make any money at all with it?

Well the answer here is yes & no – because like I mentioned above in this review, the method that Point To Click Profits is built around (which is dropshipping) in itself is actually legitimate, and you can make money with it…

BUT… In order to actually stand any chance of making money with dropshipping you need 2 things, a huge budget & some really excellent training, and the training provided by Point To Click Profits is far from excellent.

So whilst it is possible to make money in a technical sense, the real likelihood is that you will actually just end up spending money via the Point To Click Profits system rather than actually making it, as the whole thing is just designed to make its creators rich, not you.

Plus if you think the cost is just $47 like it says on the sales page then think again. The low cost they’ve advertised on the sales page is just a trick to get you to input your credit card details so that they can sign you up for what’s called “one-click billing”.

This means that once you’ve signed up & paid $47, they will save your details & then they can bill you with literally just the click of a button… So immediately after paying the $47 you’ll be bombarded with further upsells costing hundreds, potentially even thousands of dollars before you can even get access to the lame training centre that they’ve put together.

I appreciate that some people might say it’s not a scam because it does give you access to some training in return for your money (even though it’s rubbish) but in my opinion the whole thing is clearly built for the creator to earn at your expense so I personally am going to say that yes, it is a scam.

I mean the chances of you actually making money with Point 2 Click Profits are next to none, and instead you will likely just find yourself spending money.

Plus the creator has previously launched the system before under the name of Copy & Paste Commissions & has changed the name in an attempt to escape the negative reviews so that he can continue conning people out of their hard earned cash which is clearly a major red-flag on its own.

So therefore it’s safe to say that I won’t be recommending the Point To Click Profits system to you & instead if you’re still looking for a legitimate way to make money then I urge you to check out Wealthy Affiliate which is where you’ll learn about the same way that I personally generate most of my own income online.

Or alternatively you can check out my top picks page here which lists several other legitimate methods too.

But either way whatever you decide to do I just sincerely hope that my Point To Click Profits review here has given you a good insight into how the program really works & more importantly I hope it has helped you to save your hard earned cash.

If you do however still happen to have further questions or comments about the system then please don’t hesitate to leave them below & as always I’ll do my best to respond back to you in the quickest time I can.