The Profit Formula system is something that’s just recently launched & it claims to provide its members with an automated trading system that can supposedly generate them as much as $11,628 every day through online binary options trading. 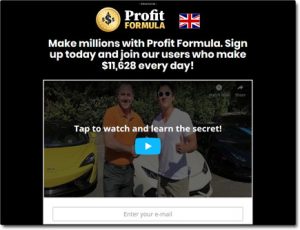 And as if that on its own didn’t already sound enticing enough the system also claims that its users will make their first profits within just 24 hours of signing up but clearly that sounds WAY too good to be true.

So what’s the deal, is it really legit & can you make any money with it or is Profit Formula a scam that’ll just end up taking your cash instead?

The good news is that you’ve landed in exactly the right place to find out as I’ve personally taken a closer look into the system myself to see exactly how it works (or how it doesn’t work) and in this honest review I’ll be uncovering everything you need to know.

What Is Profit Formula?

As I briefly touched on above the Profit System is an automated binary options system – or at least it claims to be anyway, and this particular system claims that it is capable of generating an “unbeaten success rate” with 99.9% of all members generating profits within their first 24 hours. 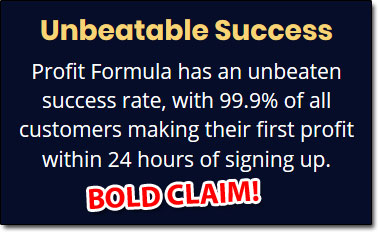 However this isn’t the first automated binary options system I’ve come across, nor is it the first to make claims like this.

In fact over the years I’ve actually come across literally hundreds of almost identical binary options systems that all promised similar results and guess what? Literally every single one turned out to be nothing but a scam.

Some of those former systems include the likes of Binary Boom, Binary Genius & the Binary Option Auto Trading System. They all did nothing other than part the members that signed up with their cash & the creators simply cashed in at their expense.

So it’s safe to say I don’t have my hopes held high for the Profit Formula system & neither should you – especially since binary options trading itself is SUPER risky. The odds are literally stacked against you & it’s so bad that as much as £87,000 per day is lost to the crooks behind these things (as shown below):

How Does Profit Formula Work?

You see when you sign up to the Profit Formula system (which I don’t recommend doing) you’re forced to make a deposit of at least $250 via a “recommended broker” – and even if you’ve already deposited funds with another broker it doesn’t matter, they won’t let you use it… You MUST deposit with their “recommended” broker in order to get access to the system.

The reason for this though is because the creator of the Profit Formula system is affiliated with the broker that they recommend you to (which actually varies depending on when you sign up). This means that if you sign up & make a deposit through their website, the broker they refer you to will pay the creators of the Profit Formula system a huge commission.

Now here’s the important bit – due to the way binary options trading works, binary brokers only actually make money when you LOSE money – so why would a binary broker pay the creators of a “guaranteed winning” system for getting you to sign up?

If the system truly worked then it would put the broker out of business, there’s simply no way a broker would ever want you to find a way to make guaranteed profits because they’d end up losing money.

This, therefore, is hands-down proof that the whole thing is just a big hoax. The Profit Formula system isn’t real at all – I mean yes, as promised it does indeed make trades for you but none of them will be profitable. In actual fact, the system is designed to make you lose (which is why the broker is paying the creators a commission) but sadly you’ll only be left to discover that after depositing.

The whole thing is a con & it’s just been designed to trick you into signing up with a broker so that the creators of the whole thing can earn themselves an affiliate commission at your expense. From there you’ll just be left to find out that the system isn’t profitable after all, and you’ll also be left to find out that the broker will likely try to block any withdrawal requests you try to make.

Binary brokers blocking withdrawal requests is a very common thing & even the big names like IQ Option have been known to do it which is why I always recommend steering clear of these sites. I even published a post exposing the true face of these binary options scammers which is worth a read too.

The trick is that these guys build their systems in such a way that it seems almost completely risk-free.

They want you to believe that you’ll just be able to simply deposit $250, try it out & then withdraw your funds if it doesn’t work out as promised – and that’s the way it would work if indeed the brokers were legitimate.

Sadly though what they don’t tell you is that they’re actually affiliated with the brokers & that more often than not the brokers are NOT legitimate, or like IQ Option they have hidden small-print in their terms which blocks withdrawals if you accept a bonus or blocks withdrawals until you trade a certain amount.

So essentially the $250 you put in is not risk-free since once you’ve put it in it’s gone for good – and like I said even if you traded by yourself when it comes to binary options the odds are stacked against you so the chances of getting it back are next to none, and these systems make it even worse because they’re designed to make you lose.

Is Profit Formula a Scam?

I could keep going over all of the reasons why the Profit Formula system is bad news but honestly, by now, I think you probably get the idea – there’s absolutely no doubt that the whole thing is indeed a big fat scam.

There’s simply no way it will help you to make money like it claims & the reality is that it has just been set up to make it’s creators wealthy at your expense instead. All of its promises are totally false & its only intention is to trick you into signing up with a broker that the creators are affiliated with so that they can get paid a commission.

I’ve seen hundreds of these systems over the years & as I mentioned earlier in this review the fact that the creator is affiliated with the broker is a proven tell-tale that the thing is a scam. A binary options broker would NEVER affiliate themselves with a system that could generate guaranteed profits as it would put them out of business.

So my advice to you is to avoid the Profit Formula system & instead, if you really want to make good money online I actually suggest you take a look into affiliate marketing yourself which you can learn more about for free at Wealthy Affiliate.

When it’s done correctly (and not by tricking people into signing up to a scam broker) affiliate marketing can be a great way to make money – in fact it’s the same way I’ve used to build an income of over $10k/mo online. All you’ve got to do is connect people with the products they’re looking for online & you get paid a commission in return for doing so.

But whatever you decide to do I just hope that my Profit Formula review here has given you a much better insight into how the system works & more importantly I truly hope it’s helped you save your hard-earned cash. If you happen to have any further questions or comments then don’t hesitate to leave them below & I’ll respond to you as quickly as I can.