The Quantum Ad Code by Michael Crawford is a re-launched (and renewed) version of the old Quantum Code binary options scam & it promises to provide you with a way to earn $13,671.32 per day for free by simply “flipping ads” online… 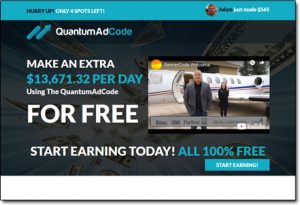 Now obviously in itself the promise of $13,671.32 per day is a pretty darn bold claim to make – but is it actually possible to earn any money at all through this thing & is there any legitimacy to it or will the Quantum Ad Code scam you instead just like its predecessor the Quantum Code did?

The good news is that you’ve landed in exactly the right place to find out as I’ve personally taken a closer look into it myself to see what it’s all about & in this honest review I’ll be uncovering the REAL truth about how it all works as well as exposing some hidden information that they really don’t want you to know. So keep reading to find out everything you need to know!

What Is Quantum Ad Code?

Like I briefly mentioned above the Quantum Ad Code is actually a re-hashed version of an old scam that launched around 2016 named the Quantum Code – but this new version works in a completely different way.

You see the old scam named the Quantum Code was what’s known as a binary options scam & essentially it led people into believing that they were getting access to an automated system that would make profitable binary options trades on their behalf.

The system claimed to be 100% free but in order for people to access it they were forced to make a deposit of at least $250 with the Quantum Code’s “recommended” broker. What the creator of the whole thing failed to tell people though was that he was affiliated with the broker which meant when they deposited, he got paid a big fat commission.

And essentially the system was just a complete fake – it was just designed as a way for the creator to trick people into depositing with the broker so that he could pocket himself some commissions at their expense.

But anyway – it seems another company has now basically stolen the old website that was used to promote the Quantum Code system & they’re basically using it themselves to promote their own new money making method which apparently involves flipping ads.

I guess it’s basically just laziness (or that they want to spend as little money as possible)… But yeah, they’ve literally just stolen the exact same website, changed the text around a little & changed the name from the Quantum Code to the Quantum Ad Code.

But can we actually make any money with the whole thing like Mr Michael Crawford claims we can in the video or like the old Quantum Code system is this just yet another scam that’s out to take our cash? Let’s take a look…

How Does Quantum Ad Code Work?

The reason I can say that so confidently is because this is literally just a duplicate of the Quantum Biz Code system that I previously exposed on this blog & it’s all based around the exact same ad flipping scam.

The creators have likely just changed the name in another attempt to escape the negative reviews so that they can continue parting people with their hard earned cash by tricking them into joining.

But anyway – onto how it actually works…

Essentially after clicking to get started you’re actually taken through to an entirely different website named BannerBit which is where you’re told that the whole thing is to do with buying & selling ads online for profit.

Now I’ll admit that when BannerBit first launched it actually seemed like a potentially interesting & new concept – but after taking a closer look into it I found some major flaws which meant it just flat-out couldn’t work.

The biggest flaw I found was that they DON’T have a network of high-traffic sites like they claim (which is where all the profits from the ads are supposedly coming from) so in short the whole thing is useless.

The reason I say that is because they basically claim that you can buy ownership of the ads, and that when you buy them you’ll essentially own the revenue generated by the advert which is being displayed on a website with lots of visitors… So you’re led to believe that you’ll begin earning a passive income from the advert each time it’s displayed or clicked on, which if you’re new to making money online could sound pretty legit…

And they make it seem like a win-win because they also have their own marketplace where you can then resell the ads on for profit if they happen to begin more revenue – which might happen if the visitors to the websites they were being displayed on happened to increase.

So yeah it could be pretty easy to get drawn into the whole thing, but if you did then you’d be left to find out the hard way that it was all just false promises. Like I said above the ads aren’t really being displayed on any websites & essentially you’re just paying them for nothing… It’s a flat-out scam.

But yeah, honestly there isn’t really a great deal else to say about this thing because it just flat-out doesn’t work like you’re told & in reality whilst the scam behind it may be different to the original Quantum Code site, the new one is still just trying to trick you into handing over money in the exact same way.

Okay so whilst you might not be able to make money by “flipping ads” like the creator of the Quantum Ad Code system code wants you to believe, there are actually other legit ways that you can make money from placing ads online…

And one of the top ways for doing it is by leveraging something called affiliate marketing which is where you basically promote things online & earn commissions if people click them & end up buying something.

It’s actually the same way I make most of my own money online & I can tell you that it’s a VERY good way to make money – plus the even better part is that you can get started for free with it over at Wealthy Affiliate.

To give you a better idea of how it works in case you’re still unsure, check out the visual below:

So as an example you could sign up as an affiliate of Amazon, which means you get the ability to promote any of the products from their site in return for commissions – all you’ve got to do is get people to click through your “special” link which is unique to you.

If they click through that & buy something then the sale will be tracked to you & you’ll earn a commission as a result.

So back onto the whole making money from placing ads thing – all you need to do with affiliate marketing is get your offers in front of people which you could do by placing ads around the web.

And the best part is that you don’t even have to pay to place the ads because if you check out my free guide here you’ll see how you can actually easily setup your own profitable website for free in a matter of minutes & you could simply place the ads on your very own website.

But anyway, back onto the Quantum Ad Code system…

Is Quantum Ad Code a Scam?

There’s no doubt about it, the Quantum Ad Code is definitely a scam & it’s a lazy scam at that. Rather than create their own website they’ve simply used that of a previous scam named the Quantum Code instead… So this thing should definitely be avoided.

And like I mentioned earlier in this review it’s not the first time I’ve come across this scam either as previously I seen it floating around online under the name of the Quantum Biz Code, so it seems they’re continually changing the name in an attempt to escape the negative reviews that out it (like this one).

But in short it’s just set out to make its creator wealthy, not you – and the creator is just making his (or her) money by tricking people into signing up by getting them to them think they’ll be able to easily make profits.

The truth is that whilst the internet is great for providing many legit ways to make money, none of them are going to see you earning lots of money really quickly & anything that promises it will is likely trying to scam you.

I mean sure, you can certainly make good money online but in order to do so you must be prepared to put in the work to make it happen & you must also have patience because it won’t happen overnight. The good news though is that if you are prepared to put in the work then there are legitimate programs out there like Wealthy Affiliate for example where you can get everything you need to get started properly.

But whatever you decide to do I just hope that my review of the Quantum Ad Code system here has given you a good insight into how it really works & more importantly I hope it’s helped you to save some cash. If you do still happen to have any further questions or comments though then don’t hesitate to leave them below & I’ll get back to you as soon as I can.