The Simple Income Strategies website promises to provide you with a way to make enough money online to completely change your life. You’re led to believe that within just 5 minutes of signing up you could be earning money right from the very comfort of your own home. 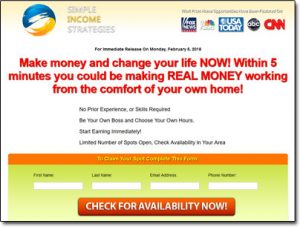 They also claim that you don’t need any prior experience or skills & that you can be totally flexible with your hours… But I think you’ll agree it all just sounds a bit too good to be true, so what’s the deal?

Is it actually legit or is Simple Income Strategies a scam that’ll just see you losing money rather than making it?

Thankfully you’ve landed in exactly the right place to find out because I’ve taken a closer look into this program & in this review, I’ll be uncovering everything there is you need to know, including how it all works & whether or not you can really make money with it.

What Is Simple Income Strategies?

Simple Income Strategies is a website that claims to give you access to what they call an “online link posting job”. The website leads you into believing that you’ll be able to sign up, start posting links & begin getting paid almost right away…

You’re also told (as mentioned at the very start of this review) that you don’t need experience or skills & that you can be totally flexible with your hours since you’ll be working as your own boss.

It probably almost sounds like a dream come true – I mean for many this would be the perfect opportunity if it were true.

Sadly though as you may have suspected the Simple Income Strategies isn’t quite what they make it out to be. In my opinion, it’s actually nothing more than a scam that’s been put together to part you with your hard-earned cash.

I know that might sound like I’m coming down on it harsh but I’ve actually seen this program several times before launched under various different names. They keep changing the name to try & escape the negative reviews so that they can continue scamming people…

Even though the name keeps changing the program stays exactly the same. I can tell you right off the bat that the program isn’t worth your time and money at all, but obviously I don’t expect you to just take my word for that so instead let me show you how it all works…

How Does Simple Income Strategies Work?

As I mentioned in the previous section of this review the Simple Income Strategies leads you into believing that you’re going to be getting access to some sort of “job” but in reality that couldn’t be further from the truth.

With the Simple Income Strategies program you will not be – and you could actually see yourself working around the clock earning absolutely no money at all (which is what will likely happen).

That’s because when you buy into the Simple Income Strategies program rather than getting access to a “job” like you’re promised you actually just get access to some very basic affiliate marketing training.

Now I want to make it very clear here that affiliate marketing in itself is a legitimate (and very good way) to make money online. It’s basically where you promote products for 3rd party companies online & get paid commissions for any sales you make.

There are many legitimate companies that teach affiliate marketing & give you the tools you need to get started such as Wealthy Affiliate.

But the problem here is that whilst affiliate marketing in itself is actually a legit way to make money, the training you’re provided with through the Simple Income Strategies program is total junk.

And I really do mean junk…

There is absolutely no way that the training given to you through this particular program will help you make money. Instead, if you hand over your cash you’ll likely just find yourself disappointed, and if you think you’ll be able to get a refund, then think again.

Basically the creators of the Simple Income Strategies system are just tricking you into handing over your cash. The only reason they give you “some” training at all is so that they can get out of giving you a refund… Technically they delivered on their promise.

I know it’s wrong but that’s how they’re getting around it.

As you likely know this is known as spamming & it will just get you banned off social media, it won’t help you make money.

On top of that companies like Amazon won’t let you join their affiliate programs unless you can show them how you’ll be legitimately promoting their links. If you’re just going to tell them that you’ll just be submitting to groups on social media they’ll merely laugh at your application.

So the Simple Income Strategies program is totally flawed… But like I say the only reason they’re giving you training in the first place is so that they can get out of giving you a refund by a technicality.

Is Simple Income Strategies a Scam?

I’ll say that yes, in my opinion, I believe the Simple Income Strategies website to be a scam. The whole thing is very misleading & the fact that they keep changing the name of their website is very worrying.

As far as I’m concerned you won’t make any money as a result of following their training & it appears to me that the whole thing has been set up purely to make the creators wealthy at your expense.

The one thing I do want to stress again though is that affiliate marketing in general is actually an excellent way to make money (just that the Simple Income Strategies site, in particular, won’t help you get started). So whilst I won’t be recommending the SIS program I will be recommending affiliate marketing in general & if it’s something that interests you then one of the best places to get started with it is a place called Wealthy Affiliate – you can find more about it here in my review.

Anyway, that’s all I have to say about this program but hopefully, my review gave you the insight you were looking for. If you do happen to have any further questions or comments don’t hesitate to leave them below.