The Simple Money Report website promises to show you how you can copy a simple money making site that was set up in 1996 which will allegedly set you up for a lifetime of success online. 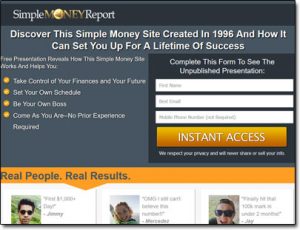 You’re led to believe that you don’t need any experience to get started & that you’ll learn how to make over $1,000 per day with a supposedly “easy method”…

But is it actually legit or will the Simple Money Report scam you & just see you spending money rather than making it?

Thankfully you’ve landed in the right place to find out because I’ve taken a closer look at this program to see what it’s all about & in this review, I’ll be uncovering everything there is you need to know, including whether or not you can really make money with it.

What Is Simple Money Report?

The Simple Money Report is a website that claims it can teach you how you can “unlock your very own simple money site”. You’re led to believe that through their site you’ll be provided with an easy way to start making money online without having to do much work to get started…

The creators of the website tell you that their whole method is based around a “simple money site” that was created back in 1996 & that you’ll simply be copying the website to see success for yourself.

It all sounds great, right? And the “testimonials” show people boasting incomes of over $50k+ per month…

What’s not to love?

You know the good old saying “if it sounds too good to be true, it probably is”? Well, that definitely applies here…

The reason I can be so confident in saying that it’s a scam right from the off is that I’ve actually seen this exact same website launched before under a different name & I exposed it on this blog.

Yep, that’s right, the Simple Money Report has just switched the name & changed the website around a little bit – but it used to be called Simple Money Sites & that was a program I exposed as a scam. Clearly they forgot to change the title of their website… Whoops!

How Does Simple Money Report Work?

Sadly though what you are promised & what you actually get are two entirely different things.

For example, you’re led to believe that you’re going to be getting access to some sort of “done-for-you” website that will simply start making you money right from the money it’s deployed… But that’s not the case.

Yes, they do indeed give you a website, but the website will not make you any money. It’s just a standard template that they give to every other person that signs up to the program… So everybody is getting the exact same thing.

They then claim that the website will automatically update with new content & yes this is also true, but once again the content is copied. It basically just pulls content from other websites online & that’s it…

They tell you that this content will go on your “simple money site” and then it will appear in search engines. You’re led to believe that people will start clicking from the search engines through to your site & that you’ll earn commissions whenever they click on any of the advertisements…

In theory, this is a legitimate way to make money but the important thing I need to stress is that you cannot make money this way with a copied website or with copied content – it’s not as easy as that.

Think about it – if it was that easy then everybody would be doing it. Heck rather than spending my time blogging I would just copy Facebook & start making the billions of dollars they make if it was possible…

The guys behind the Simple Money Report are just tricking you because like I say they just want you to hand over your cash. If you want to learn the REAL way to actually make money with this method then I suggest you check out my Wealthy Affiliate review instead – that’s a legitimate place that teaches the proper way to get started with this method (and you can join for free).

But The Scam Doesn’t Stop There…

If you do happen to buy into the Simple Money Report then what you’ll find is that the creators also push you into purchasing something called MOBE, which is an entirely different business opportunity altogether.

The reason they want you to buy MOBE is because they’re affiliated with it which means they’ll earn themselves a commission if you sign up. So on top of the money they make when you buy the Simple Money Report, they want to squeeze even more out of you by getting you to sign up to MOBE…

And they’ll be looking to squeeze a LOT more out of you because MOBE could see you spending around $50,000+

No that wasn’t a typo! MOBE, the program that initially costs around $47 to get started with gradually upsells you throughout the training & will eventually part you with around fifty thousands dollars if you decide to pursue it all the way.

Needless to say, I chose not to recommend MOBE in my review.

And just so you know, if you did happen to spend all that money with MOBE then there’s still absolutely no guarantee that you’ll make anything back. In fact, most people who join don’t make anything back – most only end up spending more money than they ever manage to make.

Plus its business model in my opinion also closely resembles that of a pyramid scheme. You buy into it to learn how to make money, then you find out that you actually make money by getting other people to buy into it just like you did… It’s not the type of thing I want to be involved with anyway.

Is Simple Money Report a Scam?

In my opinion yes it is. The site is very misleading & it’s unlikely that you’ll make any money as a result of buying into it – as far as I’m concerned it’s been set up with the sole intention of making the creators wealthy at your expense.

And surprise surprise they don’t mention anything about the potentially huge investment you’ll have to make when they push you through into MOBE.

You see the reality is that whilst yes, it’s possible to make money online – the internet isn’t magical & there’s nothing that’s going to see you earning a large income without having to do any real work.

To make money you’ve got to be prepared to put in some degree of work… But if you are prepared to do that then the good news is that there are legitimate programs that can help you get started, such as Commission Academy for example.

Overall though it’s safe to say I won’t be recommending the Simple Money Report to you because I don’t feel like it will provide you with any real value. If you do happen to have any further questions or comments about it though then don’t hesitate to leave them below.