Spin Rewriter 9.0 has just recently launched & it claims to be the world’s only content spinning software built on ENL semantic spinning technology which according to its creator makes it “the biggest secret of effective SEO in 2019”. 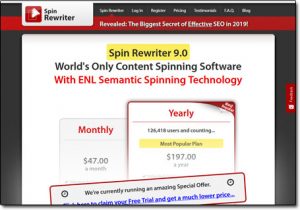 But does it actually work? Can it really produce content that’s good enough for effective SEO results or will it just prove to be a waste of money that offers you with nothing but lame content that isn’t even worth publishing?

Well I’m gonna tell you right from the off my stance on this. I am HIGHLY against programs like Spin Rewriter and I would never ever recommend using such a program, in fact I would advise you steer well clear of them.

What Is Spin Rewriter?

Spin Rewriter is a piece of software that has been created by a guy named Aaron Sustar & he basically claims that it can automatically generate human-quality content, as if it had been written by a real person.

So the idea is that you will feed it some content, for example an article that you have written, and then it will use an algorithm to switch up the words & create new pieces of content based on what you fed it.

And the main idea is that none of the pieces content will be linkable to each other… So for example if you read 1 piece of content & then read another piece it created, you shouldn’t be able to recognise that they were all actually created from the same document.

Each article is “supposed” to be unique… Because that’s what search engines like, unique content, and the whole idea of the Spin Rewriter software is to help you game search engines (which is why I DON’T recommend it).

And of course each article is supposed to be readable too, as if it has been written by a real person… Because unique content alone is not enough to get rankings, it must also be engaging which means it must read well.

So as an example of how it works, let’s say you wrote an article about dog toys. You would then load that into Spin Rewriter 9.0 & then as per its claims it would generate you “500 unique, totally human-quality articles in just 45 seconds” as shown below:

But is that really true? Does Spin Rewriter really create high quality content or is it just like the other spinners that produce nothing but gobbledegook? Let’s take a closer look into how it works to find out exactly that…

How Does Spin Rewriter Work?

And then like I mentioned in the previous section of the review you’ll need to load in some content for it to rewrite… So this means that even though you have a rewriter, you will still be responsible for creating the initial article.

Well firstly attempting to “game the system” by publishing the spun articles on your website(s) is not the way to go because even if you do find success with doing that then it is only going to be short-lived. In my opinion it is much better just to do things honestly & focus on the long-term.

Secondly, no matter how good a rewriter CLAIMS to be, it will never, ever produce content like a human will. You will ALWAYS be able to tell that the content has been spun, and search engines will be able to tell too (since they now use real humans to review content).

And thirdly, if you are going to use a rewriter to sell content to others & try to pass it off as if it is unique content that you have actually written then that is just massively dishonest & essentially you would pretty much be falling into the business of scamming others. You definitely shouldn’t do that.

I see it happens all of the time – on sites like Freelancer there are many “writers” that claim to provide articles for low prices, but then they are just providing spun content. All that happens is that people complain, they get bad feedback & don’t get paid… Then will eventually get removed from the site & no longer able to work.

The bottom line here is that you should just do things the honest way in both instances.

If you are trying to rank well in search engines, create real content! Stop trying to take shortcuts… And if you are in the business of selling content to others then write it yourself & provide a quality service which in turn will enable you to get good reviews & increase your prices.

Trickery is never the way to go…

The Version Numbers Say It All

At the moment we are on Spin Rewriter version 9.0, but before that there has been 8.0, 7.0 and so on & so on… Yet each time a new version launches the software’s creator Aaron Sustar claims that this is the “best spin rewriter ever”…

However the fact that there continues to be new versions coming out shows that clearly it is not the best, it is all just hype. I mean sure, it does indeed rewrite documents but they are NOT and NEVER will be human-quality.

Only a true human can create human quality content, and search engines are not stupid so you are never going to be able to fool them with spun content (at least certainly not for the long term).

All you will end up doing is wasting yet more money on a program that isn’t really going to add any value to your business. Instead if you really want human-quality content then why not, you know, HIRE A HUMAN?

Or until you can afford to do that, write it yourself…

Because if you’re not prepared to put in the work to own & run a business then frankly you don’t deserve to be in business. If you take a look at all of the truly successful people you’ll see that they aren’t running gimmicks like spinning articles, they’re working hard & doing it themselves!

With that being said I think it’s time for…

Is Spin Rewriter a Scam?

Well no, Spin Rewriter is not a scam by any means – it claims to rewrite content & that’s what it does, however in my opinion you should NOT use a rewriter… Ever! Instead you should create your own high-quality content yourself, or hire a writer to do it.

Shortcuts may work for the short-term, but trying to game the system by using gimmicks like rewriters is not the way to go as it will not work for the long-term & at some point your business will just come crashing down.

Like I said in the previous section of this review, none of the truly successful people are using gimmicks like rewriters… They’re putting in the hard work themselves & doing things properly.

If it was really possible to see great success using easy tools like spin rewriters then everybody would be millionaires but clearly it’s not because the truth of the matter is that most people actually fail to find success online.

Part of the reason most people fail though is because they end up getting caught up chasing gimmicks or “push button systems” that promise the world but fail to deliver. Once you realize that you just need to put in real work & join a proven training program like Commission Academy, that’s when you’ll really see success.

So if you’re still spinning your wheels wondering why things aren’t working out then I highly recommend you do check out the Wealthy Affiliate training program where you’ll learn how to do things the right away.

But whatever you decide to do I just sincerely hope that my review of Spin Rewriter 9.0 here has given you a good insight into how it truly works & why I don’t recommend you should use it. If you still happen to have any further questions or comments though then don’t hesitate to leave them below. 🙂