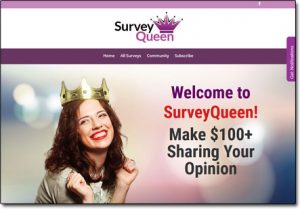 Some reviews say good things, some say bad things & some say very worrying things indeed… So what’s the truth about this new survey site? Is it actually legit & can you truly make good money with it or is Survey Queen a scam that’ll somehow just end up costing you instead?

Thankfully you’ve landed in the right place to find out for certain as I myself have personally taken a closer look into the site to see exactly what’s going on & in this honest Survey Queen review I’ll be uncovering the real truth about how it all works, as well as outlining whether or not it’s really actually worth your time.

What Is Survey Queen?

The first thing I can immediately tell you is that the Survey Queen website isn’t quite what it seems, and the reason I say that is because the landing page for it almost leads you into believing that you’re going to be applying to a paid surveys site directly – but that’s not actually the case.

Instead the Survey Queen website is basically just a website that lists paid survey companies, they don’t actually provide you with any surveys themselves – and I’ve noticed a few worrying things about the site.

The first worrying thing I noticed is that whilst the Survey Queen website does indeed list some legitimate paid survey companies, many of the results in among the listings are actually just scams, like the Take Surveys For Cash scam as shown below:

So you go to Survey Queen on the promise of getting access to “quality paid surveys” yet many of the links are scams or just links to other sites that then link to other scams & survey companies as well.

But the second worrying thing I noticed is that they require a heck of a lot of data from you before they actually give you access to any of the surveys.

They ask for your name, email, country, zip code, gender & date of birth…

And the reason I say that’s worrying is because you should be able to browse the survey companies freely. For example I’ve put a list of paid survey companies here & it’s freely accessible without entering any details.

It therefore looks to me that rather being set out to help you like it claims it is, the Survey Queen website is actually likely just set out to try & make some money from you instead by selling your details or sending you spam.

How Does Survey Queen Work?

Okay so essentially the first thing you’re forced to do upon landing on the Survey Queen website is enter your details as mentioned above, and until you do that you won’t be able to access any of the surveys.

However after doing that (which I don’t recommend doing if you haven’t already) you’re then just taken to a page which lists some pretty mainstream survey companies that are easy to find elsewhere and scams that’ll take your cash.

What’s Survey Queen Getting Out of It?

You see the fact that it’s an affiliate website means that the creator is getting paid commissions for getting you to sign up the sites that are listed on there.

However rather than sharing the best sites possible with you, he (or she) has decided to share the sites that will simply pay him (or her) the biggest commissions instead – hence the scams being listed.

Don’t get me wrong here though, there’s absolutely nothing wrong with being an affiliate – in fact I make most of my own money online as an affiliate – it’s just that the creator of the Survey Queen website is going to the totally wrong way about it.

Providing you’re truly helping people & providing legitimate recommendations then being an affiliate is fine, and it’s a great way to make money (you can also make money too from it yourself over at Wealthy Affiliate)…

But if you’re recommending scams & products just to earn money then yeah, that’s NOT the right way to do affiliate marketing at all.

Is Survey Queen a Scam?

Well I guess Survey Queen itself isn’t really a scam as such, but it’s certainly not a website I would ever recommend joining as it’s clearly operating some very dodgy practices & it could indeed ultimately lead you into other scam programs that’ll end up costing you money.

It’s clear to me that instead of being set out to truly help you like it claims it’s just set out to make the creator wealthy at your expense instead. He or she doesn’t truly care about your survey success at all – so you should definitely avoid this thing.

And like I said earlier in this Survey Queen review, there’s simply no need to ever enter your data or pay money to get access to lists of paid survey companies as there’s plenty of lists you can access for free without doing that like mine right here.

Plus there’s also a whole bunch of other great ways that you can make good make money without doing paid surveys which you can check out here.

But yeah overall I think I’ve probably made my thoughts on this company pretty clear… It’s no good for anything. Hopefully though you can now see that for yourself after reading my review & hopefully my review has given you a good insight into how it truly works.

If you do happen to still have any further questions though or maybe some comments you’d like to add then don’t hesitate to leave them below & as always I’ll do my best to get back to you as quickly as I can. 🙂