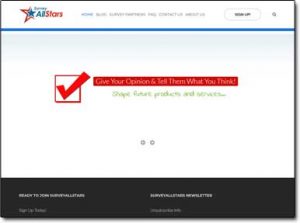 But when it comes to paid survey sites there are a lot of “tricks” and scams about… So is Survey All Stars a scam too? Or is it actually a legitimate website through which you can find yourself earning good money?

Thankfully you’ve landed in the right place to find out exactly that as I’ve taken a closer look into it to see exactly how it works & in this honest review I’ll be uncovering the truth, including whether or not you can really earn any money with them.

What Is Survey All Stars?

Survey All Stars, as the name suggests is a website that claims to provide you with access to online legitimate paid surveys… However like I mentioned above whilst there are indeed some legit paid survey sites out there, you have to be very careful when looking into new ones like Survey All Stars because there are also many scams.

And I can tell you right from the off that Survey All Stars is NOT what it seems.

You see the truth is that Survey All Stars don’t provide you with any surveys at all. Instead after signing up with your email address (which I don’t recommend doing) you’ll just be left to find out that all you get access to is a list of other paid survey companies.

And there’s no need to sign up to get those because I personally have put together a free list of legitimate paid survey companies right here on this blog.

I mean Survey All Stars don’t charge you anything – so it’s OK in that sense, but ultimately what they’re doing is trying to collect as many email addresses as possible so that they can then promote stuff to you.

On top of that they’re also affiliated with all of the survey companies that they list on their site too which means that if you happen to click through & sign up to any of them, the creators of Survey All Stars earn a commission.

That doesn’t make it a scam, but they don’t really inform you about any of that…

There are actually a lot of survey sites that I’ve come across which work in a similar way, such as Panel Bucks, Top 10 Best Paid Surveys & Survey Junkie. The truth is you don’t need to go through any of those sites to get access to paid surveys… They’re basically just acting as a middleman to earn themselves some commissions (by wasting your time).

By the way, the method the creators of Survey All Stars are using to make money (which is known as affiliate marketing) is actually a very good way to make money & it’s something you can do yourself. It takes more work than filling in paid surveys, but it definitely pays more – in fact for the past few years I personally have been making around $10k+ per month from it.

If it sounds like something you’re interested in you should check out Commission Academy where you can get started with it for free. 🙂

But anyway back onto Survey All Stars…

How Does Survey All Stars Work?

Okay so to properly understand how Survey All Stars works & what’s going on you firstly need to have a general grasp of how a legitimate paid survey site works, so firstly let me touch on that…

Basically a proper paid surveys site acts as a middleman between you (somebody who is looking to make money & willing to share their opinions) and companies who are looking for opinions & willing to pay for them.

They provide you with the surveys, you will them in, and you get paid…

So what’s Survey All Stars doing?

Well Survey All Stars don’t deal with companies looking for opinions at all, they don’t provide you with surveys & they won’t be paying you any money.

All they are doing is collecting email addresses & then referring people to other paid survey sites – the sites that actually pay people… And they’re doing this for commissions.

So when you do sign up & get access to the list of paid survey companies you’ll probably be confused as to what you’ve actually signed up for.

Also, from there you’ll begin getting spam emails sent to your inbox as the people behind Survey All Stars try to get you to sign up to other programs that they’re affiliated with – some of which are scams that cost money.

Therefore overall whilst seeming harmless on the surface the true intentions could potentially be pretty dangerous.

Is Survey All Stars Legit?

Well, it’s not really a scam as such – however it is something you should tread carefully with, and to be honest there is simply no need to sign up to it because you can get a full free list of paid survey sites here without having to sign up at all.

The truth is that the Survey All Stars site isn’t really set out to help you, it’s just set out to make its creator some money by getting you to subscribe to his newsletter so he can promote products to your inbox via spam emails.

It’s more of a trick than anything… And for that reason I won’t be recommending it to you.

To be honest though I don’t really recommend paid surveys in general at all because they pay so poorly in return for your time. Like I mentioned earlier in this review there are MUCH better ways to make money, such as affiliate marketing which you can learn more about at Commission Academy.

But whatever you decide to do though I just hope that my review here has given you a better insight into how the Survey All Stars website works & hopefully you can see why it’s not so great. If you do still have any questions though then don’t hesitate to leave them below & I’ll get back to you ASAP.