Survey Junkie is a website that claims to pay its members in return for their opinions, but is it really legit or is Survey Junkie a scam that’s somehow out to part you with your time/money? 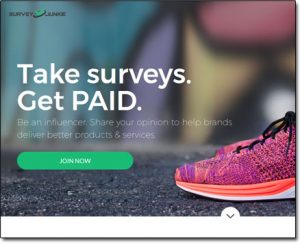 That’s exactly what I’ll be finding out in this Survey Junkie review where I’ll also be uncovering everything you need to know about the company meaning if you’ve been thinking about joining you can rest assured you’ve landed in exactly the right place to find out if it’s a good decision.

And it’s worth pointing out that I’m NOT an affiliate meaning you’ll be getting an honest review unlike many of the others which have clearly been written by affiliates who are only interested in getting you to sign up so that they can earn themselves a commission.

What Is Survey Junkie?

It’s completely free to join as Survey Junkie make their money by taking a small percentage off the amount that the companies pay to the survey participants (aka you).

And I can also confirm that Survey Junkie is actually a “real” survey website, not an aggregator. This basically means that Survey Junkie will be the company providing you with the surveys & issuing payments rather than just passing you off onto other websites like Survey Voices or Survey Say do.

How it works is pretty simple – you’ll sign up & then you’ll be asked to complete a profile which they’ll use to get an idea about who you are so that they can match you to relevant surveys.

Then you’ll get sent surveys & you’ll earn virtual points whenever you complete one which can later be redeemed through PayPal or e-Giftcards.

I can confirm that Survey Junkie is indeed a legitimate survey site that has a proven track record in paying its members. With over 3 million members in total Survey Junkie is actually one of the largest & most popular survey sites around alongside Global Test Market & American Consumer Opinion.

Anybody that’s over 18 years old & resides in the UK, USA, Canada or Australia can sign up to Survey Junkie & registration is completely free. As mentioned at the beginning of this post Survey Junkie make their money from the companies paying for the surveys so there’s absolutely no cost at all to you.

How Much Can You Earn?

The one thing I like about Survey Junkie is that they’re really honest about the amount you’ll be able to earn – there’s no hype or bold income claims, just the promise of being able to make a little extra cash.

In terms of what you’ll actually be able to earn, it depends on a couple of factors really.

Firstly, your profile will determine how many surveys you’re sent each week – and secondly, members that participate in surveys more frequently are told that they’ll also receive a higher number of surveys which will help increase their earnings.

So overall, looking at some of the average numbers from various consumer reviews it seems you’ll be able to earn around $5 to $10 per month through Survey Junkie.

If you want to earn more you could consider joining multiple companies (some of which I’ve listed below) & you could probably push your earnings up to around $30 to $50 per month.

The only downside is that Survey Junkie doesn’t reward you with anything if you’re found not to be eligible whilst halfway through a survey, so you could see yourself spending a bit of time on a survey only to get booted off without getting anything in return.

Global Test Market, on the other hand, is a survey company that will give you 5 points even if you get booted off a survey, which isn’t much but at least it’s still something for your time.

Well, it’s completely free & legitimate so there’s certainly no harm in trying it out if you’re looking for a bit of extra cash but sadly as with all paid surveys you’re going to see yourself paid poorly for your time.

In my opinion, if you’re looking for a way to build an extra income online you’d be better off starting a blog or getting into affiliate marketing instead. I personally believe that those 2 methods are much better for the long-term & they’ll certainly pay you more handsomely than paid surveys ever will – but admittedly they will require a little more work.

But yeah to sum it up Survey Junkie is a pretty good website & with it being one of the leading paid survey companies you can rest assured you’re in good hands when it comes to payouts & things.

The only disappointing thing for me is that they don’t seem to reward you with anything if you’re found not to be eligible for a survey halfway through & get booted out of it – that gets kind of frustrating.

Still, it’s worth a try if you’re looking for some easy extra cash – just don’t expect too much from it. If you want to join multiple companies to boost your earnings you can find a list of additional paid survey sites here.