Lately, I’ve been taking a closer at the paid survey opportunities online – I’ve reviewed several companies, some which were good & some which turned out to be flat out scams. 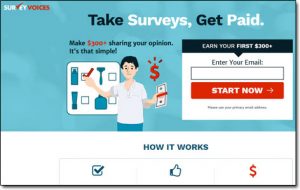 So if you’ve been thinking about joining Survey Voices you can rest assured that you’ve landed in exactly the right place to find out everything you need to know about it before you do – and it’s worth pointing out that I’m NOT an affiliate which means you’ll be getting an honest Survey Voices review from a third-party.

What Is Survey Voices?

At a glance Survey Voices looks like your average paid survey website, but it’s not – it’s actually something that’s known as a paid survey aggregator website. To be honest it’s very similar to a company I recently reviewed named Survey Say (which is also an aggregator) & therefore it’s possible that the 2 websites could be owned by the same person.

So, what is an aggregator – and does that mean it’s a scam?

Basically a “real” survey company acts as a middleman between you (somebody who’s looking to earn a little extra cash) & companies that are willing to pay people in return for their opinion.

Here’s a screenshot of a question in their FAQ which clearly proves that Survey Voices are merely passing you on to 3rd party websites (and earning a commission for doing so):

What’re The Benefits of Survey Voices?

You might be wondering if there’s any benefit to joining Survey Voices as opposed to signing up at survey companies directly, and to be honest there isn’t. In fact, it’s probably better to sign up with them directly.

Survey Voices claim that by signing up through them instead they’ll screen you & show you the most relevant, high-paying survey opportunities based on the information that you provide but in reality, they just want you to sign up with them so that they get you onto their mailing list so they can make money from you.

All they’re interested in is getting you to sign up with as many paid survey companies as they can because they’re affiliated with them & they earn a commission for each new one that you sign up to.

But knowing that you’re interested in making extra money it seems that via email they also try & pitch you into various other opportunities too, some of which are blatant scams out to part you with your cash.

However, Survey Voices claim that you can make $300+ quickly & easily which is just outrageous – most people don’t even see that kind of income from paid surveys in a whole year.

It’s clear to me that they’re just trying to get you curious about the opportunity to try & tempt you to enter your email because as mentioned above once you’re on their mailing list their work is done.

Is Survey Voices a Scam?

It’s not really a scam as such but it’s not something I’d recommend you join. It’s clear to me that Survey Voices just want to get you onto their mailing list so that they can pitch you various offers & earn money at your expense by getting you to sign up to various companies that they’re affiliated with.

Rather than risk your inbox or phone getting bombarded with spam messages I’d recommend that you just join the survey companies directly instead. To make it easier I’ve put a list together for you here.

To be honest though whilst paid surveys are a pretty easy way to earn a little extra cash, that’s all you’re even gonna get with them – a little extra. In my opinion if you’re looking for a way to build an extra income online you’d be better off starting a blog or getting into affiliate marketing instead.

Those are 2 methods that you could start in your spare time but potentially turn into a full-time gig & they’ll definitely prove to be more lucrative in the long term than paid surveys or similar things.