TAI Robotic is an automated Forex trading platform that has been created by a guy named Alex Knecht who claims that it can generate you guaranteed profits of thousands of dollars per day on complete autopilot. 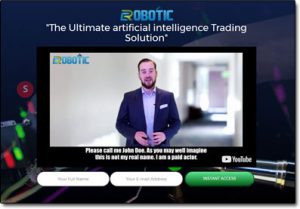 On the TAI Robot website, Alex claims that the software has been built to use artificial intelligence that can predict profitable trades, but is it actually legit?

Or is TAI Robotic a scam that’s just out to part you with your hard-earned cash?

Well, you’ve landed in the right place to find out as I’ll be uncovering everything you need to know (including how it all really works) right here in this review.

What Is TAI Robotic?

TAI Robotic, which stands for Trading Artificial Intelligence Robotic is a piece of software that claims to be able to make completely automated profitable trades on your behalf without you having to do anything.

As I briefly mentioned above the software has supposedly been developed by a guy named Alex Knecht who claims to top programmer based out of Germany who works on software for self-driving cars.

He says that in his spare time he is a successful Forex trader & that he’s actually been trading since he was 9 years old. He now reckons he has developed a piece of software that can pick up trends & guarantee profitable trades.

But is it just a load of BS?

I’ve seen a lot of spiel over the years & it seems that every automated trading platform has some sort of “secret” algorithm to generate profitable trades, but coincidentally none of them ever work…

The majority of them, such as the Dubai Lifestyle App & 30 Day Challenge system have been nothing but flat-out scams designed to take your money. So can we actually trust the TAI Robotic system?

How Does TAI Robotic Work?

The TAI Robotic system is said to be designed to enable anybody to make money quickly & easily, regardless as to whether they’ve even heard about Forex trading before or not – a common claim associated with a scam.

You’re supposedly able to just sign up for free, make a deposit of at least $250 with their recommended broker, hit the “start trading” button & then sit back whilst the money starts pouring into your account…

However, sadly the reality is that it doesn’t quite work like that…

As per my initial suspicions, the TAI Robotic system is indeed just yet another trading scam that’s been launched with the intent of parting people with their hard-earned cash.

After signing up to the TAI Robotic system (which by the way I don’t recommend you do) you’ll be taken to a page where you’ll be forced to deposit with their “recommended” broker – a big red flag.

You can’t get access to the system until you’ve made the deposit & even if you already have accounts with other brokers they can’t be used, you must make a deposit with their “recommended” broker before you can proceed.

If you make any sort of hesitation on the deposit page your phone will instantly start ringing as the broker will quickly begin calling you through the number you signed up with to encourage you to deposit.

This is another massive red flag because the brokers only make money when you lose money, so why on earth would they be encouraging you to sign up & deposit funds to try out a system that guarantees profits?

The truth is because it doesn’t guarantee profits!

The TAI Robotic system is merely a ploy to get you to sign up & deposit funds with the broker so that they can earn money at your expense. After you deposit & get access to the system you’ll find it doesn’t work as promised.

But if you think you’ll be able to simply withdraw your funds back out think again, the brokers associated with these scams are rogue brokers & they’ll make accessing your funds very difficult, or almost impossible.

How Can I Be Sure It Doesn’t Work?

Sadly systems like the TAI Robotic system & other scams like the 1K Daily Profit system target people who are in the most desperate of financial situations & some people often don’t like my verdict.

And I am of course sorry to be the bubble burster.

However, the truth is I’ve reviewed hundreds of these scams over the years & I know exactly how they operate. Initially yes, I did try them with my own money – but as I grew wiser I was able to spot the tell-tale signs.

The TAI Robotic system displays them all.

Whilst the internet provides you with plenty of opportunities to make money, sadly it’s not magical & there are no programs that will make you money quickly & easily without you having to do anything.

If the TAI Robotic system really worked then think about it – everybody would be using it & you’d be hearing about it on the news, not from some popup on your PC or spam email in your inbox.

And yes, I’m aware that there are actually some news sites promoting these systems but take a look at the address in the address bar of your browser – they are fake news websites built as part of their ploy.

On top of that, you should question why they are so desperate to get you in.

The reason they are so desperate because they are making money from you, not the other way around. If the system really worked as promised they wouldn’t need to put 10-minute videos together trying to draw you in.

Is TAI Robotic a Scam?

Yes, it is, it’s clear to me that the TAI Robotic system is merely out to part you with your hard-earned cash – it hasn’t been created by Alex Knecht like you’re led to believe & it doesn’t work as promised.

The system is nothing more than a well thought out ploy that’s been put together by a group of rogue brokers who are looking to make a whole bunch of money at your expense & the expense of others.

It’s been designed to lull you into a false sense of security by making you think that you can try it out without any great deal of risk but the truth is that any funds you deposit will be gone for good.

Regardless as to whether or not you trade the funds, the brokers will make them almost impossible for you to withdraw – often they will point blank refuse withdrawals & sometimes they will even trick you into depositing more by pretending that you are profiting until you later attempt to withdraw & realize it’s all been a scam.

I’ve heard of people losing their life savings to these things.

So as you can probably guess I will be giving this system a huge thumbs down & I certainly won’t be recommending it to you because it’s clearly just out to take your money from you.