The Laptop Entrepreneurs is a website that claims to be able to help people build successful businesses online doing what they love, even if they’re completely new to the world of online marketing. 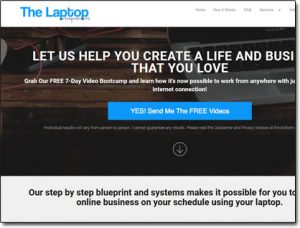 But is it actually legit? Or is The Laptop Entrepreneurs a scam that’s simply out to part you with your hard-earned cash to make the creators wealthy at your expense?

That’s exactly what I’m going to be finding out in this review of The Laptop Entrepreneurs as I dig deep to see what it’s all about, how it actually works & whether or not it can really help you make money.

So if you’ve come across The Laptop Entrepreneurs & have been thinking about joining you can rest assured that you’ve landed in exactly the right place to find out everything you need to know about it before you do. And I’m not affiliated with it which means you’ll be getting the honest truth (not biased BS)!

What Is The Laptop Entrepreneurs?

The Laptop Entrepreneurs is a training ground that has been launched by 4 people named Gerald Hall, Christopher Hall, Merrilee Watson & Sandrine Hecq. The group call themselves the Lifestyle Team & claim to be professional affiliate marketers that can help you improve your income & your lifestyle.

Whilst I’ve seen The Laptop Entrepreneurs being promoted in various different places it seems that it really took off on YouTube & chances are that you too discovered it through Merrilee & Sandrine’s video (shown below) which now has over 1,795,413 views ?.

After watching the video you’ll probably think great – it sounds like the perfect deal, and Merrilee/Sandrine definitely come across as 2 trustworthy people who seem like they’d help you get started online…

However in truth Merrilee/Sandrine don’t own the system they’re getting you to buy into, they’re just affiliates of it & they’re making their money by getting new people to sign up to it (like you).

So The Laptop Entrepreneurs isn’t really a system in itself – it’s just a sales funnel that’s been put together with the intention of getting you to buy into an entirely different program that they’re affiliated with.

Now don’t get me wrong I don’t have a problem with promoting things online, in fact, I actually do it myself (but obviously I only promote legitimate programs). The problem is that I don’t recommend the program these guys are getting you to buy into & you’ll see why in a moment.

I also don’t really like it when people try & cover up the opportunity/program they’re really promoting, it kinda makes me feel like they’re hiding something or almost “tricking” you into buying into it… But regardless I come across lot’s of websites that use this tactic, for example, I recently reviewed The Rookie Profit System which wasn’t a system at all it was just a sales funnel to get people to buy into the MOBE business opportunity (another program I don’t recommend).

Here’s What You’re Really Being Sold…

The Laptop Entrepreneur website is just a well thought out sales funnel that’s been put together with the simple intent of getting you to buy into the Six Figure Mentors program (known as SFM).

Basically The Laptop Entrepreneur website & video series is just a way for the “Lifestyle Team” to gain your trust so that they can later pitch the SFM program to you knowing that when they do you’ll be more likely to buy.

The Six Figure Mentors program is actually kind of similar to the Digital Altitude & MOBE programs (neither of which I recommend). That’s because it’s very expensive & whilst it does provide some level of legitimate training it’s clear that the main goal is to simply get you to promote the SFM opportunity to other people.

I mean don’t get me wrong the Six Figure Mentors program does give out some quite valuable training & I’m sure if you already have an online business that some of it could help you grow it but overall I really do think that it’s just way too heavily geared towards promoting the SFM opportunity itself.

As a newbie, I definitely don’t the Six Figure Mentors is the right place to start – even with the help of The Laptop Entrepreneur Lifestyle Team.

As mentioned above the Six Figure Mentors program does actually contain some fairly good training, but in my opinion, it is way too overpriced & I feel that because the program can be resold onto other people that it has been priced with commissions in mind as opposed to the value it provides to make the opportunity seem more lucrative.

Come to the end of the video course you’ll find out that to continue with the training you’ll need to sign up to SFM’s Student Membership. This is their cheapest level of membership yet it costs $29.95 just to apply & $25 per month if you go on to become a member.

From there it gets more expensive as there is 2 higher level of memberships and you’ll be assigned a “coach” who’s real job is just to call you up or Skype you & push you into upgrading to the higher levels.

The higher levels are the Basic & Elite memberships, the costs can be seen below:

Pretty expensive I think you’ll agree! And whilst it’s not quite as expensive as the Digital Altitude or MOBE opportunities I still think it’s a pretty high price-tag especially considering you can get high-quality training elsewhere for free.

Is The Laptop Entrepreneurs a Scam?

Well no, I wouldn’t say that The Laptop Entrepreneurs is a scam & nor is the Six Figure Mentors program that they’re getting you to buy into. They do both provide legitimate training & you could potentially make money with the methods they teach, just I feel that it’s way too heavily geared towards promoting the SFM program onto other people as opposed to learning how to build your own REAL internet business.

The other issue for me is that in my opinion the SFM program/training has been priced with commissions in mind as opposed to basing it off the actual value that it provides. I mean don’t get me wrong there is some good training in there but there is just no way I would pay $2,500 + $97 per month when I know that you can get high-quality training elsewhere for free at Wealthy Affiliate (which personally I think is actually better).

So for those reasons, while I do feel that the Six Figure Mentors is a legitimate program I won’t be recommending it to you as something you should join because I feel that with such a high buy-in price there’s just way too much risk involved, especially if you’re brand new.

It’s also clear to me that the Lifestyle Team behind The Laptop Entrepreneurs clearly know their stuff but it seems their content has been produced purely to get you to buy into the SFM opportunity so ultimately they’re making money at your expense. Then if you decide to get involved you’ll basically be required to do the same because SFM is basically a “make money by selling this learn how to make money program onto other people” type gig…

If you’re new & looking to get started – or to be honest even if you already have an online business & you’re looking to improve, Wealthy Affiliate is definitely the training program that I’d recommend (and it’s free).

4 thoughts on “The Laptop Entrepreneurs Review – Scam or Legit?”