Traffic Multiplier Pro is a recent addition to the online money making platforms in which the developers use overly hyped marketing. 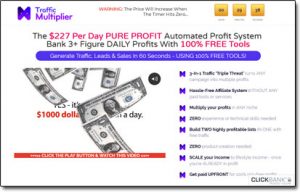 With the passage of time, the claims such as being able to make $200 per day are becoming more and more unreliable but still, for one reason or the other, people keep coming up with such a marketing strategy.

So welcome to our honest Traffic Multiplier Pro review where we are going to pull down the curtain to show you what is happening backstage.

What Is Traffic Multiplier Pro?

Traffic Multiplier Pro has been introduced by Leigh and Glynns and the acclaimed purpose of this program is to facilitate its buyers by generating quality leads and optimizing conversions. The starting price of Traffic Multiplier is set at $17 and there are upsells which is not a good sign.

What we have learned from the sales page is that Traffic Multiplier Pro is kind of a hub that presents a variety of tools you could use to generate traffic and increase sales. They claim that this program starts generating profits within the first day you set it up… But in my opinion, that’s an outrageously bold claim.

Yes, the internet is great & yes it provides many legitimate ways to make money however what you have to understand is that it is not magical & it is not going to see you earning lots of money really quickly with little to no work like Traffic Multiplier Pro claims.

Plus another problem here with Traffic Multiplier Pro is that having the tools at your disposal doesn’t mean anything unless you are an expert at using them. If you are not a soccer player you can’t perform on the soccer field. You need expertise and training. This is why we mostly reject such so-called automated programs.

Generating traffic and elevating conversion rates isn’t a child’s play and they are talking about making $200 per day… That’s a lot of income ($6,000 per month) so if it were true that it were so easy then everybody would be doing it, nobody would be working jobs.

I mean yes it is possible to do it – I myself even put together a guide explaining how to make $100 per day, but what you must understand is that it takes time & effort to achieve that. Traffic Multiplier Pro is claiming you can do it with next to no work, which is crazy.

Plus the sales page of Traffic Multiplier Pro is full of contradictions. At one point, they say that you don’t need to invest money if you are using this program. Then, they tell you that you could generate the anticipated results by spending a few pennies each day…

It’s, therefore, safe to say that we couldn’t manage to stay calm when we read the disclaimer that clearly states that “the success level depends on the number of financial resources you spend“.

But even if you spend more money on it, could you really make good money in return? Let’s take a closer look into exactly how it all works to find out…

How Does Traffic Multiplier Pro Work?

To be very frank, Traffic Multiplier Pro doesn’t even work. The reason is that the pathetic promotional strategy is full of lies. For instance, the sales page claims that the autoresponder is completely free with this program…

But many of the buyers are reporting that they’re not happy because they paid $17 only to find out that the autoresponder is only free for the first 30-days and that it is the trial version. After the first month, you have to pay an additional fee to use the autoresponder. 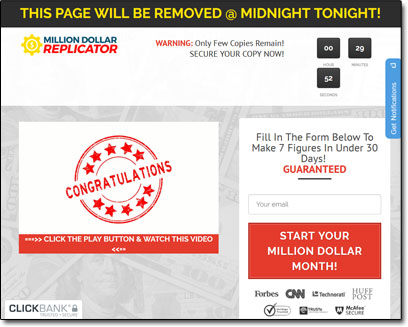 The training is also substandard as we found nothing worth mentioning. They guide you about setting up your website, email captures, push notifications, and other freely-available content… There’s nothing special contained in the program as far as I’m concerned.

They also keep repeating on their sales page that this program doesn’t require additional investment. But during the training, they frankly tell you that you need money to make this program as expected. They introduce you to the paid methods of generating traffic to your website.

Even when you are looking to create a website, you need to purchase a domain. You need to renew the ownership every year. You have to pay the hosting charges (unless you follow my guide to get a free website). On top of that, there are certain plugins that are almost essential for the website.

Then you have to invest in paid advertisements to generate traffic because the SEO training provided through Traffic Multiplier Pro won’t really help you to get free traffic at all… Which is why I personally prefer Commission Academy, because they teach more about free traffic methods rather than paid ones.

In my opinion Traffic Multiplier Pro is a huge disappointment for the reason that this platform is full of lies and misdirection. The contradictory claims make it a nightmare and this is what we hate the most. Unfortunately, this program has earned its place as one of the most unreliable platforms ever.

Is Traffic Multiplier Pro a Scam?

Due to the frequent lies and contradictions, we can comfortably call Traffic Multiplier Pro a get-rich-quick style scam. Though they have something one offer and the training educates you about online traffic generation but their claims had been much different.

To be honest, they are only telling you how traffic is generated online and how the different tools work. They don’t really show you how to actually implement it, and also most of this stuff is available free of cost in PDF and video formats.

For example, you can get awesome affiliate marketing training for free over at Wealthy Affiliate.

Plus there’s also the fact that Traffic Multiplier Pro is basically just a re-hashed version of the Million Dollar Replicator program. They’ve basically just changed the name in an attempt to escape the negative reviews so that they can get more people to sign up.

It, therefore, comes without saying that I am not going to be recommending the Traffic Multiplier Pro program. Instead, if you want to find true success with affiliate marketing I would strongly recommend you stick with a proven program like Commission Academy instead.

Alternatively to affiliate marketing, however, you could also check out all of these other cool ways to make money online.

But whatever you decide to do I just sincerely hope that my review of the Traffic Multiplier Pro system here has given you a good insight into what you can truly expect from the program, and I also hope it’s helped you to save some money.

If you do happen to have any further questions or comments though then don’t hesitate to leave them below. 🙂