The Viral Cash App is a system that’s been put together by a guy named Matthew Neer & it claims that it can help you generate lot’s of money online really quickly & easily through some sort of viral video traffic method. 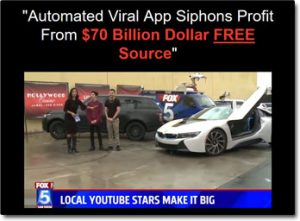 But is it really legit or is the Viral Cash App a scam that’ll only end up leaving you with less money than you actually started out with?

Thankfully you’ve landed in the right place to find out because I’ve taken a closer look into this system & in this review, I’ll be uncovering everything there is you need to know, including how it all works & whether or not you can make any money with it.

What Is The Viral Cash App?

As I briefly touched on above the Viral Cash App is one of Matthew Neer’s latest creations & it’s a program that claims it’s going to help you make lot’s of money online really quickly & easily.

Pretty much all of Matthew’s products have promised the exact same thing, such as the Speed Wealth & Wealth Ascension system’s that he previously released – but sadly none of them really helped anybody make money… At least not the kind of money he claimed anyway.

Will the Viral Cash App system be any different?

Well, to be honest, I don’t really have high hopes but nevertheless, I’m going to take a look into it to find out for sure. After all, I don’t want to be just disregarding a program if it could potentially make us some good money.

So let’s take a look at how it all works…

How Does The Viral Cash App Work?

The first positive thing I’ll say about the Viral Cash App system is that whilst the video does throw out a lot of hype about how much money you’re going to be able to make, it does actually go into some level of detail about what’s actually involved…

This is quite rare to see when it comes to make money programs because generally they just promise you some secret method & then don’t really give you any details about it. They just keep you guessing until you hand over your cash & then you’re usually left to be disappointed when you find out how it actually works (or should I say doesn’t work)…

He basically tells you that his Viral Cash App will create you a website that pulls “viral” videos from the internet and lists them automatically. Then alongside these videos, he says the app will allow you to place advertising.

The concept is that because the website contains “viral” videos, when you share it the pages will go viral & you’ll earn a ton of money from the advertising.

It actually just seems to be a re-hashed version of his Viral Money Method program which worked in a pretty similar way. It’s possible he’s just changed the name & created a new sales video to target new people (and dodge the negative reviews people wrote about his last system).

Well needless to say the last version of this program (the Viral Money Method) didn’t help anybody make money – and as far as I’m concerned there’s no way this one is going to either.

There are a couple of reasons for that…

Firstly, it’s not as easy to make something go viral as you might think. For a start you generally need a large audience – so unless you’ve got a HUGE following on social media, how are you going to initially promote the videos?

Secondly, it is generally just the videos themselves that go the viral – not the websites hosting them. For example, videos that go viral on Facebook are generally directly hosted on Facebook – the same with viral videos on YouTube. You never really see a viral video on social media that actually requires you to visit a website first because most people don’t want to click away & open a new window to watch them…

And on top of all that the biggest problem is that the Viral Cash App simply copies other videos that have gone viral… This is absolutely not going to work. The reason for that is because these videos have already gone viral, so it’s likely that most people have already seen them… They’re old news, and by just adding old outdated viral videos on your website you can’t expect to make a ton of cash.

If you could just copy videos or copy websites like this & make money so easily by simply placing adverts around the copied content then EVERYBODY would be doing it. Sadly it’s not as easy as that.

If you really want to make money online then you must be prepared to produce your own unique content. Whether that be blog posts, videos, whatever – you are going to have to be unique to be successful.

But if you are happy to put in the work required to make it happen then the good news is there are legitimate programs like Commission Academy where you can learn how to get started properly & make real money the right way.

Is The Viral Cash App a Scam?

Well, it’s not really a scam as such since the Viral Cash App system promises that you’re going to get a website containing viral videos with adverts dotted around & that’s what it does indeed provide you with… It’s just that the method isn’t really going to see you making any money like Matthew claims it will.

Realistically the only person making money here with the Viral Cash App is Matthew himself and the affiliates that are promoting it. I mean think about it, if the method actually worked so well then why would he decide to sell it through this system? You’d just keep it yourself & profit from it rather than telling everybody else & creating competition for yourself.

Ultimately though if you did buy into it & you found yourself disappointed it’s not too big of a deal because I noticed the products being sold through ClickBank & if you contact ClickBank directly they’re usually pretty good at honouring refunds (providing it’s done within 30 days or whatever the terms state when you purchase it).

But overall I’d just steer clear of the Viral Cash App system & join a legitimate training program like Commission Academy instead where you’ll learn REAL methods of making money online rather than gimmicks like the viral video method.

Anyway – hopefully, you found my review here useful & hopefully it gave you the insight you were looking for into this system. If you do happen to have any further questions or comments about it then don’t hesitate to leave them below.