The VSN Cash System, alternatively known as the VSN Cash Income at Home System is something that’s recently been put together by a guy named Desmond Smith & it claims to be able to help you generate as much as $500 per day online… Even if you have no previous experience. 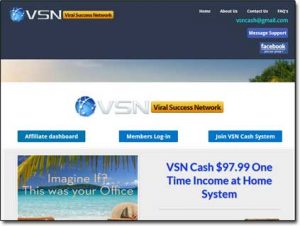 But obviously that’s a pretty bold claim… So can you really make $500 per day as Desmond claims or is the VSN Cash System a scam that’ll just end up taking money from you rather than actually helping you make it?

Luckily if you’ve been thinking about signing up to it you’ve landed in exactly the right place to find out the answers to those questions as I’ve taken a closer look into it & in my honest review here I’m going to be uncovering everything you need to know.

What Is The VSN Cash System?

The VSN Cash System (with VSN standing for Viral Success Network) claims to be an automated income system and the website for it states that you can simply sign up, sit back and allegedly watch the cash roll in. 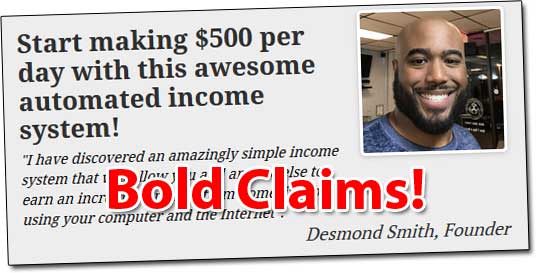 This kind of implies that you don’t really have to do anything to make money, but to be honest that couldn’t be further from the truth. In fact, if you’re new to online marketing then you’ll actually find making money with the VSN Cash System pretty darn difficult… And you’ll shortly see why.

But one thing that is also claimed on their website is that unlike other companies who apparently “have no strategies for actually making sales after you join”… The VSN Cash System claims to have a proven-to-work system which can generate you as much as $500+ per day.

It sure sounds impressive, but sadly it’s just another lie. The VSN Cash System is actually brand new & at present, there’s no proof of anybody making $500 per day – whereas other programs, like Commission Academy for example which has been around for years, have solid proof of helping people find success and certainly contain plenty of strategies for making sales.

So yeah, it sure sounds good on the surface but as I dig deeper into it & show you how it really works below you’ll soon see why it’s not really as great as it’s made out to be…

How Does The VSN Cash System Work?

Well whilst it boasts on its sales page as being an “Automated Cash Income System” as shown below, once you actually sign up (which I don’t recommend) you’ll be left to find out that’s not really the case.

Instead after handing over the initial fee of $97.99 you’ll be left to find out the hard way that all you’ll really be getting access to is some affiliate marketing training & the opportunity to resell the VSN Cash System onto others.

So basically it’s kind of like the MOBE program (which was recently shut down by the FTC). It consists of you signing up, then learning how to promote the VSN Cash System to others & earning commissions by suckering them into investing… Just like you did.

The reason MOBE got shut down was that the FTC deemed that it was more like a pyramid scheme than a legitimate way to make money & in my opinion, the VSN Cash System looks awfully similar… Meaning it too could potentially get shut down.

On top of that, the $97.99 fee isn’t all you’ll be paying either & that’s why I highlighted the word “initial” above. Instead after signing up you’ll be pushed towards spending $197.97 on advanced training, $997 on 1-to-1 coaching & crazy amounts (into the thousands) on paid advertising.

So what initially costs you just $97.99 could quite quickly turn out to cost you thousands more – and there’s still no guarantee that you’ll make money. In fact, the truth is you probably won’t.

So the positive side is that you do actually get access to something… And I’m not gonna lie some of Desmond’s training is pretty decent – you’ll probably find some value from it if you’re a newcomer.

However, personally I don’t believe the training is worthy of a $97.99 per month price-tag – especially when you can get much more in-depth training (and tools) for free over at Wealthy Affiliate.

On top of that, I also don’t really like the fact that the training is heavily geared towards re-promoting the VSN Cash System itself. I mean you might not be interested in pushing a make-money product onto people… You might want to promote something else instead (such as Amazon products), but you’ll find learning how to do this very difficult with the training provided through the VSN Cash Income at Home System as it literally just focuses on showing you how to sell that same system onto other people.

Like I said earlier in this review as well, there isn’t any Automated Cash Income System at all… In fact, there isn’t even any automation. If you want to make money with the VSN you’ll have to be actively promoting it to people & encouraging them to sign up & invest just like you did.

As a total newcomer, you’ll no doubt find this quite a difficult task & it’s likely that you’ll just end up spending more on the monthly membership (and potentially the upsells) than you’ll ever make back.

Then There’s The Push on Paid Traffic…

If you’re an expert at online marketing then paid traffic is something that can help you scale your business to the next level. It basically consists of you paying for people to come to your website or offer rather than using the free methods to get them there instead.

The reason paid traffic can seem like the better option is that it can enable you to get things moving fast. You pay some money & people come… It’s as simple as that – whereas with the free methods, whilst they’re very good it can take weeks or months to get people coming.

The problem however with paid traffic is that you have to pay money… And therefore you obviously have to make sure you make more money back from each visitor than what you spend on getting them there. Whilst this sounds pretty easy, let me tell you that it’s a BIG task.

The truth is most people fail to even break even with paid advertising, let alone make a profit – and it generally takes several attempts (and often thousands of dollars) before they manage to come up with a campaign that works.

So as a newbie, paid traffic is NOT the way to go. It can sure seem like a good idea I’ll admit that but in reality, it will see your bank balance disappear quicker than you could ever imagine.

Now, this is where the VSN Cash System really falls down because almost all of it’s training is geared towards using paid traffic – meaning if you are a newbie, or if you don’t have a huge budget to start out with then you’ll likely struggle to get the ball rolling.

Instead, you’ll just find yourself frustrated as to how to actually get people to join the VSN Cash System via your affiliate link & you’ll be an extra $97.99 down every month whilst you try & figure it out on your own.

Is The VSN Cash System a Scam?

Well, I think it would be wrong of me to call it a scam, it’s not really that as such as you could technically actually make money through the program… But it’s definitely a lot harder to do so than it’s made out to be.

So whilst it’s not a scam, it does make a lot of hyped-up & false promises which makes it very misleading. For that reason, I won’t be recommending it to you as I believe that if you pay to join you’ll find yourself disappointed.

And like I mentioned earlier in this review there are actually free, legitimate (and in my opinion better) places that you can learn affiliate marketing such as Commission Academy – which is one of my top picks.

The truth is that yes – you can potentially make money with the VSN Cash System but the chances of you actually doing so are very slim. You’ll likely just end up spending more on the membership than you ever make back through sales… And it’s certainly not automated as it claims either.

So anyway hopefully this review here has given you a good insight into how it all really works & hopefully you can appreciate why I’ve come to the decision not to recommend it. I also hope this helped you save some cash too. ?

If you do still happen to have any more questions though then don’t hesitate to leave them below & I’ll get back to you ASAP.