The Wealth Project system has allegedly been put together by a guy named James Robertson & in just 30 minutes & 21 clicks, it claims it can provide you with a proven method for making thousands of dollars every day for the rest of your life. 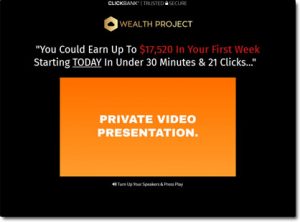 You’re therefore basically led to believe that you’ll just be able to sign up, click a few buttons & start profiting right away – but that sounds way too good to be true, don’t you think?

So what’ the truth? Is it actually legit? Or is the Wealth Project a scam system that’ll end up taking money from you instead of helping you make it?

You can rest assured that you’ve landed in exactly the right place to find out as I’ve personally taken a closer look into this system to see how it all works & in this review I’ll be uncovering the truth about what’s really going on – as well as outlining whether or not you can really make any money with it.

What Is The Wealth Project?

The Wealth Project system is one of the latest products to surface on the ClickBank network – and there’s been quite a few new money-making programs popping up on there lately as just this morning I published a review of the Million Dollar Replicator system, another ClickBank product…

So coupling the fact that the Wealth Project makes some extremely bold claims together with the fact that it’s a ClickBank product I can say right from the off here that it looks like we’re looking at yet another get-rich-quick scam.

Of course though I won’t brush it off as such so quickly, instead as with all of the opportunities I come across I’ll continue to dive deep into it here in my review to see exactly how it all works & whether or not there’s any money to be made at all (even if it isn’t the thousands we’re promised on the sales page).

So yeah, before I dive into how it does work, let me first touch on how it’s supposed to work…

Basically the website promoting the Wealth Project system claims that the whole thing has been put together by a guy named James Robertson, and in the promo video for the system, James states that in just 21 clicks his system can see you earning over $1,000 per day – even if you’ve never previously made so much as a single penny online before.

It sounds impressive for sure, and no doubt it’ll have grabbed your attention (which is probably why you’re here reading this review, to see if it’s legit)… But what James doesn’t talk about is how any of it actually works.

He tells you that it doesn’t involve creating products or recruiting friends into things, but he doesn’t say much else other than that – instead to find out more he pushes you towards signing up for a fee of $37…

But you should never pay money for something unless you know exactly what you’re getting… So just what are you getting in return for your money? And is $37 really the only cost that’s involved? Let’s take a look…

How Does The Wealth Project Work?

After taking a closer look into the Wealth Project system I was able to find out exactly what is being offered on the other side & it’s safe to say that I am not impressed – in fact, I believe my initial suspicions that it is a scam have been confirmed.

So to make good money from affiliate marketing you need really good training, to learn how to do it, and there are legitimate places that you can get that kind of training – like Wealthy Affiliate for example (which is free to join).

However there are also a lot of places that provide poor training – training that won’t really help you at all, and the Wealth Project system is one of those places.

The truth is they’re not really interested in helping you one bit, they’re just interested in making themselves money… So they hype you up about this “great opportunity” but then after you hand over your cash they just fail to deliver on their promises.

They literally give you a PDF document and that’s it…

But what’s even worse is that the PDF is totally out of date – the methods taught through it are old news, and they won’t help you get started at all. Instead of a crappy PDF you need proper, updated training, like the training found here.

The Wealth Project system has been built entirely around the concept of speed & ease but the truth is that there is NO way, and NEVER will be a way for you to earn good money so quickly and easily.

The reason for that is because whilst the internet is great & whilst it provides you with many legitimate ways to make money, it’s not magical & it’s not just going to line your pockets without you having to do much.

So you can indeed make good money online but in order to do so, you must be prepared to put in some time & effort, just like with anything in life. The good news though is that if you are prepared to put in the time and effort then platforms like Wealthy Affiliate can enable you to see huge success.

And also if you are prepared to put in the work then be sure to check out my guide to earning $100 per day online (which is free).

But anyway, back onto the Wealth Project system…

The True Cost of The Wealth Project Is Outrageous

If you think the cost of the Wealth Project program is really just $37 like it’s alleged creator James Robertson claims then think again as in reality, the program costs more than that… Way more!

There are actually 3 additional upsells inside & as you can see from the screenshot of the sales funnel below these upsells are by no means cheap – and could set you back in total over $400! 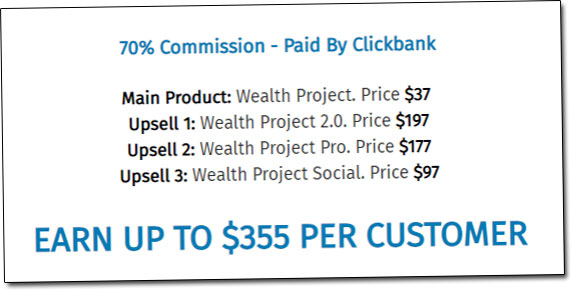 As to what these upsells provide you with, I don’t know – I’ll admit I didn’t even look… I don’t care… I will not be recommending the program at all let alone any of the upsells. As far as I’m concerned they’re just BS like the initial product & they’ve just been put there so that the creators can take even more money from you.

It might be “technically” legit, but in my opinion, it’s completely unethical…

James Robertson Is Also Fake, Too…

As you likely already guessed, the guy that you’re told has created the whole thing is just a fake too. The name James Robertson is just a pen-name that’s being used to hide the true creators of the scam (ahem – I mean system).

Honestly, it’s gotten to the point where now as soon as I see the ClickBank logo I immediately start to think the product is probably a scam because there are simply so many of them being sold through their network.

I mean don’t get me wrong like I say there are indeed some legitimate products on ClickBank – like the EZ Battery Reconditioning guide – but I can tell you that they’re certainly few & far between.

Is The Wealth Project a Scam?

The answer to that question is a bit of a yes & no… You see, from a technical perspective, it’s not really a scam as such since you do get access to some training, even if it is really crappy… However, in my opinion, it IS a scam because the whole thing is just totally misleading & it does not deliver on any of its promises.

What I’m saying, in short, is that basically if you sign up to the Wealth Project system there is NO way you will find yourself earning money as quickly and as easily as you’re told you will, and to be honest you’d be lucky to make any money from it at all.

As far as I’m concerned the whole thing has been set up for 1 reason & 1 reason only, which is to enable the creators of it (who remain anonymous) to make themselves some profits at your expense.

So it’s safe to say that I will be advising you to steer well clear of the Wealth Project system unless you’re looking for a way to lose money… And instead, if you really want to learn how to make money properly online then I suggest you check out a legitimate program like this one (that is proven to work).

Or alternatively, you could check out the page I’ve put together containing all my top ways for making money here…

But whatever you decide to do I just hope that my honest review here has given you a better insight into how the whole thing works & hopefully you can see why I do not recommend trying the Wealth Project system out. If of course you do still happen to have any further questions or comments though then don’t hesitate to leave them below & I’ll get back to you ASAP.