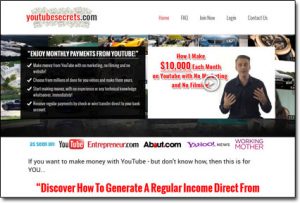 He claims that through his YouTube Secrets course he’ll be sharing that exact secret with you & he even claims that you can literally begin making money the very same day that you get started.

Plus on top of that, he also states that you’ll be doing all of this by using other peoples videos.

You won’t have to record a single thing & there’s no marketing or website building at all, according to him at least…

But is it actually legit? Or is YouTube Secrets a scam that you should just avoid?

Well, I’m really glad that you took the time to look for a YouTube Secrets review before you signed up to it because I can tell you immediately that the whole thing is not what it seems – and Mike Williams isn’t even a real person.

YouTube Secrets is a program which essentially promises to provide you with an easy way to make lots of money on YouTube by leveraging other people’s videos & it’s supposedly been created by a YouTube guru named Mike Williams.

You’re told that the method Mike will be giving you access to includes no marketing, no filming & no messing around with websites.

He even claims that you can do it without any experience or technical knowledge whatsoever & he states that you can begin earning money with his method right from the very same day that you get started.

The problem though is that in reality, things aren’t quite as they seem.

Take Mike Williams himself for example – he isn’t even a real person… Well technically he is, but he’s certainly not a YouTube superstar – he’s actually just a paid actor that’s been hired from the website Fiverr as shown below:

And on top of that, despite the YouTube Secrets website claiming that the course had been featured in many high-profile publications such as Yahoo News & Entrepreneur, I couldn’t find any evidence whatsoever to back those claims up.

So what’s really going on here? Can you really make any money with YouTube Secrets like you’re led to believe or is it just another scam that’s set out to part you with your hard-earned cash?

Well basically it’s not a “flat-out scam” as such, but at the same time it’s not really set out with the true intention of helping you to make money like it claims to be either.

YouTube Secrets is a paid-for training course which essentially just instructs you to download other peoples videos & then re-upload them to your YouTube channel in an effort to earn money from advertising revenue.

The initial fee is just $1 & that’ll give you access for 7-days on a trial basis however if you forget to cancel or wish to continue with the program then from there onwards it will cost you $27 per month.

And in my opinion, it’s simply not worth that.

Plus if you do join (which I don’t recommend & you’ll see why in a moment) then you’ll also be faced with a “1-click upsell” immediately after joining. The weird thing about that is that the upsell is actually for the Paid Social Media Jobs program (something totally different).

This basically means that if you happen to “click” that you want the upsell then your card will be automatically charged for a further $28… And you’ll have basically bought a program which has nothing to do with making money from YouTube.

It’s also worth me pointing out that when I reviewed Paid Social Media Jobs (the program that you’re upsold into) I came to the decision that it all looked a bit shady & it didn’t appear to really hold true to its word either.

So yeah, if you DO buy YouTube Secrets (which I still don’t recommend) then I’d definitely advise avoiding purchasing the additional Paid Social Media Jobs upsell because that’s 100% a waste of money.

And Here’s Why I Don’t Recommend It…

The whole YouTube Secrets program is geared around making money from YouTube advertising revenue – and whilst this is a legitimate source of revenue, it’s not the best way to earn from YouTube.

There is actually a much better way to earn through YouTube & that’s by leveraging something called affiliate marketing. Basically most people who make money from YouTube advertisements just see the advertisement money as “bonus money”…

9 times out of 10 the real money is made through affiliate marketing.

So yeah, there’s that – but there’s also the fact that the YouTube Secrets program is literally focused around using other peoples videos… Which in other words is basically called stealing, and that’s a big no-no.

You can’t just download other people’s videos & re-upload them to your channel & make money from it without expecting any sort of repercussion. It’s theft & you’ll eventually get caught out.

The more videos you upload, the more chance you have of getting caught… And you’re not going to make any money whatsoever with the YouTube Secrets method unless you have hundreds (potentially even thousands of videos) uploaded.

So this means that if you follow the YouTube Secrets method, even if you make money you’ll almost certainly find yourself ending up in legal trouble which will likely see all your profits taken back in the form of legal fees.

It’s simply not worth it – if you truly want to make money from YouTube then you should just create the content yourself… You know, like everybody else does.

Plus There’s Also The Lack of Updates…

After taking a closer look into the course I actually discovered that Mr Mike Williams (or should I say the REAL person) behind the YouTube Secrets program hasn’t updated any of the content since 2016.

That means the entire thing is massively outdated because since 2016 YouTube has changed crazy amounts. What worked back then doesn’t work now & the editors, guidelines & restrictions have all changed too.

That also strengthens my beliefs of the fact that the person who’s really behind it doesn’t really care about the success of the members of the program – he or she just wants to earn money for themselves instead.

If they really cared about the success of the members that joined the program then they would almost certainly have made sure that they kept the content up to date to reflect the changes in YouTube over the years.

And Finally, There’s The Fake Testimonials

Mike Williams is fake, the claims made by the YouTube Secrets are fake & upon taking a further look into the so-called “member testimonials” of YouTube Secrets I also found out that those are fake too.

Take “Kristy Lynch” for example as shown below:

At a glance, you may think there’s nothing wrong, but upon using Google’s Reverse Image Search tool I was able to find out that the lady pictured isn’t named Kristy Lynch at all.

She’s actually a travel blogger named Dannielle as proven below: 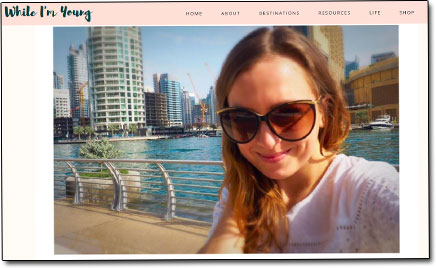 Well, this is a little bit of a difficult verdict to arrive at because from a “technical” standpoint I can’t really say it’s a scam since you do actually get access to some training as promised (even though it’s extremely poor quality & hasn’t been updated since 2016)…

But in the same breath, in my opinion, it IS a scam because it’s quite clear with all of the lies & deceit that the person behind it isn’t really interested in helping you to find success whatsoever.

He or she is just primarily interested in making themselves wealthy at your expense – and for that reason, I won’t be recommending it. Instead, I’ll be advising that you steer clear of it & save your money.

If you truly want to make good money online (whether that be from YouTube or a website or a blog) then I would urge you to just stick with a legitimate & proven training program like Commission Academy.

It’s over at Commission Academy that you’ll learn the proper methods for finding success & you can even get started with that for free to see if it’s something that you would really like to pursue or not.

Plus there are also these other great ways to make money online too.

But whatever you decide to do I just hope that my review of YouTube Secrets here has given you a good insight into how the program really works & I hope it has helped you to save your money.