I often receive emails from my followers telling me about new opportunities to make money via Amazon sales. This time it’s Amazon Cash Websites attracting thousands around the globe… But does it really pay back? We’ll have to investigate before answering yes or no. 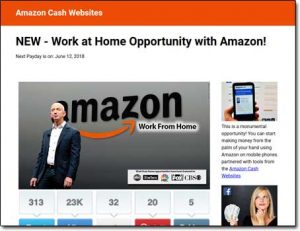 This Amazon Cash Websites review will reveal to you everything they don’t want you to know. There are certain hints which reflect the maliciousness attached to this offer. The presentation is extremely impressive so people often think of trying it. The best thing to do is to first consider all the pros and cons and then reach a realistic decision.

Lot’s of my followers are asking about the legitimacy of this platform so if you are also somebody who wants to know if Amazon Cash Websites is a scam then you need to read through this review. Like all of my reviews, I’ll first let you know about the particulars of this offers as advertised on the website, then I’ll move onto how it actually works and what results you can expect to determine the worth of the program.

What Is Amazon Cash Websites?

The content on the Amazon Cash Websites page promotes the launch of Amazon’s new “Work at Home Program”. They claim that this program has been put together to help people generate income from home through Amazon. Further claims made by the website suggest that it’s allegedly the best way to generate consistent income in the long run and that it really works as advertised.

It’s here that I’ll point out that yes, people do earn online income from Amazon but the truth is that there is no dedicated work from home” program released by Amazon in this regard, nor are they planning to launch one.

The website claims that the program is efficient enough to help you earn over $14k a month almost instantly without having to put in much effort, even if you’ve never made a penny online before… Surprise surprise though, you just need to purchase the kit and rest will allegedly be done for you.

Sounds like a classic scam right from the off… Promising the world, but asking you to pay for something first before you get access to it…

If such a “work from home” tool had really been launched by Amazon, the whole world would have chased it and there would have been no need to build websites to advertise it. Everybody in the world loves making money through little effort. So if it was legit then why has this program been hidden from the majority of the world’s population?

The website’s content is just a congregation of misleading information. The news clips are absolutely fake. These clips don’t come from the legit sites but are actually customized to serve the purpose. You can easily set up a simple news site, upload the content and then capture the screenshots. The title of the news is editable and is designed so that it states the area linked with your IP address.

How Does Amazon Cash Websites Work?

Upon investigation, I realized that Amazon Cash Websites is actually promoting multiple products. The aim is to bring in new subscribers, to earn it’s creators affiliate commissions at your expense. Like most of the other money-making opportunities, this one also introduces you to a series of random products.

Once someone subscribes for the offer, he/she is taken to something totally new. If you hit the main advertisement or hit the “Let’s Get Started” link right at the bottom, the action takes you to a completely different website named Take Surveys for Cash (which is a known scam that I’ve previously exposed on this blog).

If you proceed, you’ll keep reaching strange pages all offering something seemingly amazing but totally fake.

There is nothing real in this offer and it is just promoting other programs. It doesn’t make any sense and doesn’t do anything other than wasting your time.

Should You Join Amazon Cash Websites?

I really don’t see a reason for joining such a program. You’ll only find yourself redirected through to random bogus money-making opportunities & none of them actually carry any value. People do generate income from Amazon as affiliates (which you can learn more about for free at Commission Academy) but they have to work hard for it. It is a complete field involving marketing and online strategies. The money won’t just fall into your lap like the Amazon Cash Websites system claims it will. You’ve to invest time, effort and money to make things work.

If you don’t want to manufacture or source any products yourself then you could alternatively think of selling eBooks. People are earning handsome income through their eBooks and there is an impressive demand on Amazon. For instance, one of my friends sells dozens of recipe book on Amazon and generates over $100 a day. But she has written over 50 eBooks each featuring 15 to 20 recipes. The higher the number of books, the higher the chances of consistent sales. It requires time and effort though. You have to make it attractive, pay the designers and proofreaders for the book cover and editing. In short, money doesn’t just fly in your direction. You have to try hard in an attempt to pull it towards you. There is no magnet in the word to pull currency to you (like The Manifestation Millionaire system tried to claim), the only way to get it is through hard work and devotion.

Then there are affiliate programs which help you earn through affiliate marketing. In this case, you promote other’s products to earn commission against the sales. This is also a legitimate and reliable way of earning consistent online income… In fact, in my opinion, this is actually one of the best ways that you can make money online & like I mentioned earlier in this review you can learn more about it for free over at Commission Academy.

Is Amazon Cash Websites a Scam?

Amazon Cash Websites is definitely a scam and as far as I’m concerned the whole thing is just built upon deception. It claims that it will help you make money but in reality, it’s just been set up to make it’s creators wealthy at your expense instead…

If you happen to sign up to the Amazon Cash Websites system (or any of the other scam websites it redirects you to) then you will just find yourself massively disappointed at what you actually receive. Like I say the whole thing is totally bogus & for that reason, I won’t be recommending it to you.

As I stated above you can indeed make money from Amazon, and you can certainly make lot’s of it too – it’s just that there is no official easy “work from home” program or anything like that. If you are however still interested in learning how to legitimately make money from Amazon then instead of signing up to the Amazon Cash Websites program I’d advise you join Wealthy Affiliate instead (which is free of charge and legitimate).

But anyway whatever you decide to do I just hope that this review has given you a better insight into how the whole thing really works & more importantly I hope it’s helped you keep hold of your hard-earned cash. If however you do still happen to have any further questions or comments about this program then don’t hesitate to leave them below & I’ll get back to you as soon as possible.