Bitcoin Lifestyle is the name of a new app that can supposedly trade Bitcoin profitably on your behalf & it claims that it can enable you to generate a completely automated income. 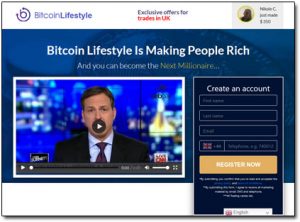 You’re told that the Bitcoin Lifestyle App is making people rich & that by signing up you can become the next millionaire. All you need to do is deposit just $250 to get started.

But is Bitcoin Lifestyle actually legit? Or is it just a scam that’s set to sucker you out of your hard-earned cash?

Well, thankfully you’ve landed in the right place to find out because I’ve personally taken a closer look into the Bitcoin Lifestyle App & in this honest review I’ll be uncovering everything you need to know.

What Is Bitcoin Lifestyle?

Bitcoin Lifestyle is the name of an app that can supposedly generate automated profits by trading Bitcoin entirely on your behalf.

You’re led to believe that you don’t even need to know the first thing about Bitcoin & that you can simply sign up, deposit $250 with the broker & activate the app to begin earning money.

And I think you’ll agree, that sounds pretty darn nice.

But no doubt you’ll also agree that it sounds too good to be true.

Well, that’s because it is.

The reality here is that the Bitcoin Lifestyle App is nothing more than a scam & I can say that so confidently because it’s a scam that I’ve actually already exposed on this blog several times before.

The person behind it simply keeps on changing its name in an attempt to escape the negative reviews so that he or she can continue tricking people into joining & suckering them out of their hard-earned cash.

Some of its previous names include Bitcoin Digital & Bitcoin System, among others.

But, of course, you don’t just have to take my word for it when I say that it’s a scam. Instead, keep on reading & in the next section of this Bitcoin Lifestyle review, I’ll explain exactly how it works.

Or should I say, how it doesn’t work…

How Does The Bitcoin Lifestyle App Work?

But sadly, in reality, that’s not how it works.

You see, there are 2 very important things that the Bitcoin Lifestyle website fails to mention & when they are coupled together, these 2 things literally prove that the entire thing is a scam.

The first thing the website fails to mention is that it is affiliated with the broker that it recommends to you. This means that if you make a deposit, the creator will be paid a commission.

And the second thing that it fails to mention is that the broker that you’re recommended to make a deposit with is not a traditional broker. Instead, it’s what’s known as a binary options broker.

So why do these 2 things prove that it’s a scam?

This means that if you win, the broker has to pay your winnings out of their own pockets.

With that in mind, you can therefore see that it’s in their interests for you to lose, not win.

So ask yourself this…

Why would a broker, that loses money when you make money, be paying commissions to the creator of a system that could supposedly guarantee you to win on every single trade?

The answer is that they wouldn’t.

You see, after depositing via the Bitcoin Lifestyle website you do actually get provided with access to an “app” as promised & it does indeed appear to begin generating profits on your behalf…

But the app isn’t really connected to any live markets.

It’s essentially just a video game & the profitable trades that you appear to be making are all fake. It’s just a ploy to trick you into making more & more deposits with the broker.

And each time you make a new deposit, the creator gets paid yet another commission.

So whilst it may seem harmless (as you’re led to believe you’ll just be able to get your money back if it doesn’t really work) you can likely now see that it is certainly not.

The reality is that it’s actually a very dangerous scam as it could result in people making several deposits before figuring out that they’re actually getting conned.

And just in case you’re still thinking of “trying it out”, let me highlight some of the other red flags to you below so that you can see first-hand for yourself that it is far from being legit.

In the instance of the Bitcoin Lifestyle App, it most definitely is.

I mean, think about it. If there was really such an app that could generate people thousands of dollars per day all on complete autopilot then the world would be in absolute crisis.

Everybody would quit their jobs… The entire world would shut down.

So, put simply, it can’t happen. It’s not possible. I mean yes, there are many ways that you can legitimately make money online but you cannot make lots of money quickly without any work whatsoever.

The good news, however, is that if you are prepared to put in some work then there are methods such as affiliate marketing that can provide you with a passive income further down the line.

But as for magical millionaire-making apps? Those don’t exist.

And alongside that, there are also several other red flags too such as the fact that the Bitcoin Lifestyle App website displays absolutely no ownership or contact information whatsoever.

Would you really invest money with an anonymous website?

I sure as heck hope you wouldn’t. That’s just as good as asking to be scammed.

As you can see from the image above, the image of “Amira S” from Southampton (who has allegedly generated profits of $3,041) has just been pulled from a free stock photo website named Pexels.

And as you can probably guess, it’s the same for all of the others too.

This brings me nicely onto my next point…

Is Bitcoin Lifestyle a Scam?

The entire system is fake & it has just been designed to trick you into making a deposit with an unlicensed binary options broker. You will NOT make money via the Bitcoin Lifestyle App.

And as I mentioned towards the beginning of this review, this exact same scam has actually circulated for several years under various different names.

Some of its previous names include Bitcoin Prime, Bitcoin Digital & Bitcoin System.

The Bitcoin Lifestyle App is literally the exact same scam, just launched under a new name.

So, take my advice & avoid the Bitcoin Lifestyle App… Unless you wish to lose money, of course.

Instead, if you’re still looking to legitimately earn an extra income online then I’d recommend that you just stick with the proven alternatives that I’ve listed on my top picks page.

Hint: My personal favourite is something known as affiliate marketing. In my opinion, it’s hands down the best way to build an income online (and you can earn as much as you like).

But either way, whatever you decide to do I just hope that my honest review of the Bitcoin Lifestyle App here has helped you to see how it really works & most importantly, helped you to save your cash.

Feel free to leave any additional questions or comments below.