If you’re thinking I’ve made a typo, no I haven’t – Bitconcent is actually a newly launched cryptocurrency-based money-making program & surprise surprise it shares an awful lot of common traits with the similarly named site that came before it, Bitconnect. 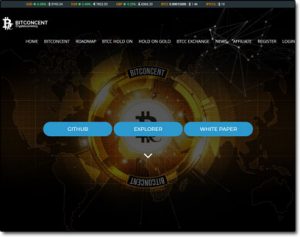 Bitconnect though as you may know got forced to shut down, leaving people parted from their investments – so what’s the deal here with this one? Is it actually legit or Bitconcent a scam that’ll also leave you penniless just like Bitconnect?

Luckily you’ve landed in the right place to find out because I’ve taken a closer look at this new company to see what it’s all about & in this review I’ll be sharing everything there is you need to know, including most importantly whether or not you can really money from it.

To be honest, Bitconcent really does just look like Bitconnect 2.0, even the name itself is almost identical. It basically comprises of a new cryptocurrency named the Bitconcent Coin which comes bundled with an attached money-making opportunity.

You’re led to believe that you can simply invest in Bitconcent Coin & enjoy high returns of up to 45% per month (in some cases even more) without actually having to do anything. Just like Bitconnect did it claims it provides the easiest way to make money…

But after taking just a brief look around there website you’ll soon realize that there’s recruiting involved which is never a good sign when it comes to these things. Couple that with the promise of high returns & it all starts looking rather like a Ponzi scheme.

So… is Bitconcent a Ponzi scheme? Let’s take a look…

As of all of these types of cryptocurrency opportunities do, the creators of Bitconcent (who remain unknown) give off a whole spiel about how the coin is going to be so great & how it will increase in value.

You’re led to believe that if you get in early & purchase the coin that you’ll be able to make money by trading it as it’s value later increases. This is indeed 1 potential way you could make money from Bitconcent…

But that’s not the way you will make money from it, because instead rather than trade your coins you’ll be pushed to join their “lending” program instead. This lending program promises much higher returns & much less risk than trading.

So what’s the catch? Well, the catch is that there so-called “lending program”, through which you’ll give your Bitconcent Coins back to them so that they can invest them in their “volatility software” to make you money is all a big phoney.

They basically claim that they have some automated software which detects trends in the crypto-market & that if you lend your money to them they’ll trade it & pay you the guaranteed returns.

It might sound convincing if you’ve never heard of anything like this before but honestly, it’s total garbage. For 1, if they really did have this so-called volatility software then why couldn’t they just make it publicly accessible? Why do you have to “lend” your money to them for them to do it instead?

The reason is that it simply doesn’t exist.

Two other companies, BitsTrades & Falcon Coin made the exact same claim but they were later found out to be nothing but Ponzi schemes.

When you see one of these cryptocurrency opportunities boasting stupidly high returns & running some sort of recruitment or affiliate scheme through which you can “earn extra money” it should almost immediately start ringing alarm bells.

That’s because what’s really going on here is members are basically paying other members off… It’s just a scheme that’s been set up to make the creators wealthy at everybody else’s expense.

Sure, some people who get in early may manage to make a little bit of money, but the likelihood is most others who get in afterwards will end up losing it because the creators could collapse the company at any moment & they likely will do before you manage to make your money back.

That’s why the creators don’t list their details anywhere on the website and that’s a huge red flag.

You should never, ever invest money with a “ghost” company like this. If you did, and the company does collapse as it likely will then who on earth would you chase down to get your money back?

You just don’t know & that means the likelihood is you will never be able to get it back.

At least if you know who the company is or the people associated with it, and you know it’s regulated (which Bitconcent also isn’t) then you have a fighting chance of getting your money back if you get scammed.

Can You Make Money With Bitconcent?

The thing that draws most people into these programs is the promise of easy money. They see the high figures boasted & they start thinking “well maybe I could just deposit, earn a bit & withdraw”…

The problem is that you don’t know the current cash flow of the company… Maybe new members have stopped coming in, and if they have, and you deposit then you will lose your entire investment.

If new members are still coming in & you do start making a little bit of money, when do you stop? Most people then start thinking “just a couple more days”, then before they know the company has collapsed.

Again this means they’ve been parted with their cash.

So yes, there is the potential to make money with this sort of thing but there’s a higher chance that you will lose it. Essentially it’s just not worth the risk, there are many better, legitimate ways to make money.

I’m very confident in saying that Bitconcent is a scam – there is just no way that the promised ROI figures could be legitimate & the whole thing about the “volatility software” just makes it seem like a joke.

As I say I saw two other companies that were running this exact business model & they were found out to be Ponzi scams, I suspect the exact same thing is happening here with Bitconcent.

The worrying thing is that they’ve used a very similar name to the name of the company that recently got forced to shut down. Why would they do that? It’s likely they’ve done it because they don’t want people to be able to search for Bitconcent reviews… If you do, search engines like Google will assume it’s a misspelling & show you results for BitConnect instead, then you won’t be able to find out the real truth about this company.

But yeah overall I am definitely not going to be recommending this program to you, there is absolutely no way I would ever advise you to invest money with a company who don’t even give you any details about themselves. That’s just a common trait of a scam, the owners keeping themselves hidden so that after they take your cash they can run & start up another program under a different name without any trace.

For all we know Bitconcent could have been started by the creators of BitConnect… That’s just it, when these guys hide their names there’s just no way of telling. You definitely don’t want to get involved.

Anyway, hopefully, you found this review useful & hopefully it gave you a good insight into how this company really works. If you happen to have any further questions or comments don’t hesitate to leave them below.