Bitfinite is a newly launched cryptocurrency-based money-making opportunity & it claims to be able to provide you with “infinite independence”. You’re led to believe that you can just sign up, invest in the coin & begin earning passive income through what they call a “lending opportunity”. 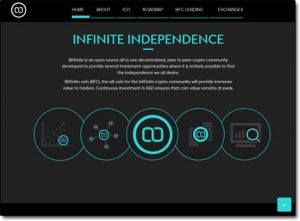 But I’ve seen several of these so-called lending opportunities before, most of which have now been shut down… So what’s the deal with this one?

Is it actually legit or is Bitfinite a scam that’s just going to part you with your cash?

Thankfully you’ve landed in exactly the right place to find out because I’ve taken a closer into it all & in this review I’ll be uncovering everything there is that you need to know about it, including how it all works & whether or not it’s just another crypto-based Ponzi scheme.

Bitfinite or BFC coin is what’s known as an altcoin, which basically means it’s an alternative cryptocurrency coin to the one you’re probably more familiar with named Bitcoin & it’s just recently completed its ICO (Initial Coin Offering) so it’s now available to trade internally on their website.

These types of altcoins have been gaining a lot of interest over the past few months because with the price of Bitcoin getting so high many people have now started looking at alternatives in the hope that they can cash in by investing when they first launch.

I can see why people have this idea but the bad news is that to date no altcoin has seen the same rise as Bitcoin & to be honest the majority of them I’ve come across to date have actually been nothing but scams.

Sure – there have been some legitimate ones such as BnkToTheFuture for example but due to the fact that anybody can create their own altcoin, I’ve seen many Ponzi schemes launching & therefore it really pays to do your due diligence when it comes to this sort of thing.

Okay, so the concept of a proper altcoin is that they bring something new to the table, after all, if they’re going to see anywhere near the same rise as Bitcoin then they’ll need to come up with something super innovative to encourage people to start using them or to increase their overall value for investors.

One way you can typically spot a cryptocurrency ICO scam is simply by looking at their plans & questioning whether or not they truly bring anything new.

So what does Bitfinite bring to the table?

Well as far as I can see, nothing… Nothing other than a “lending opportunity” at least, but this is what makes me sceptical of the whole thing just being an attempt at covering up a Ponzi scheme.

You see a few months ago there were two very similar companies kicking around named BitConnect & USI Tech. They operated in a seemingly very similar manner to Bitfinite & pushed a “lending program” but they were later shut down due to the fact that there was actually no lending going at all, and that money was merely being passed from investor to investor.

If you don’t know a great deal about Ponzi schemes the reason this is so bad is that the business model is totally unsustainable meaning it will ultimately collapse & leave people parted from their investments… That’s why these 2 companies were shut down (but many still lost their money).

The worrying thing here is that Bitfinite looks like it operates in the exact same way as those 2 scams.

You’re promised that you can earn revenue by “lending” your money to Bitfinite and that you can earn even more by recruiting people into the scheme. They claim to have an automated trading robot that generates profits on autopilot & that it’s these profits which are paid out to members, but there’s no solid proof of that.

If the trading bot exists, the scheme would be deemed legit…

If it doesn’t exist, the scheme would be nothing but a scam – a Ponzi scheme scam where old investors are merely getting paid out by new investors. Once new investors stop coming in so does the money & the whole thing collapses.

Everyone who has money in at the time of the collapse will lose it… So investing in Bitfinite poses a BIG risk to your money.

Can You Make Money With Bitfinite?

I’m gonna be completely honest here and say that the answer to that question is yes, you can potentially make money with Bitfinite – however as mentioned above, in my opinion, the risk involved far outweighs any potential reward.

The first way you can make money with Bitfinite is by investing in their coin & trading it on their internal exchange. If you buy it & the value increases, then you can sell it & stand to make a profit.

The problem with this though is that despite actually having an internal trading system, there isn’t actually much trading going on because the holders of Bitfinite BFC coin are pushed towards the second method of making money which involves holding onto the BFC coin & “lending” it to Bitfinite.

To do this you create an account at Bitfinite, deposit BTC which gets exchanged for BFC coin & then you select a lending package through which you’ll earn a passive interest on your money. The packages are shown below:

But whilst you can potentially make money, know that as I mentioned above you will much more likely end up losing it. To make money through Bitfinite you need to have your investment held up in there & if the company collapses whilst it’s held up then you’ll lose everything.

Remember, Bitfinite’s whole legitimacy is weighing on whether or not their automated trading system is real & there’s absolutely no proof of this. Furthermore, if it were real then why can’t they simply open it to the public… Why is the public forced to “lend” back to Bitfinite?

As far as I’m concerned, in my opinion, it sounds like a typical cryptocurrency scam.

Especially considering they have a multi-level recruitment program & pay you to get other people to invest in the company. The whole thing just looks way too suspicious & I certainly won’t be getting involved personally.

Well, I can’t say for sure because like I say the legitimacy of the whole thing is entirely dependant on the “automated trading system” being real, but what I will say is that I’ve reviewed over 100+ auto trading systems on this blog over the years & I’ve never seen a single one that could actually produce sustainable profits – most of them were just scams.

Couple that with the fact that Bitfinite has a multi-level recruitment platform in place & the whole thing just looks way too suspicious in my opinion. It seems to share close resemblance to a typical Ponzi scheme & the whole “lending” operation could likely just be a cover up for what’s really going on.

So overall I won’t be recommending the Bitfinite opportunity to you – instead, I’ll be advising that you stay away from it. As far as I’m concerned there’s just no reason why you should put your money at such risk because there are many legitimate ways you can make money online without the threat of losing money.

Anyway, hopefully my review gave you a good insight into how all this works & why it might potentially be a scam. If you happen to have any further comments or questions about it don’t hesitate to leave them below.

2 thoughts on “Is Bitfinite a Scam? Read My Review Before Investing Any Money!”