Brendan Mace has just launched a new money-making program on Warrior Plus named Incognito which promises to provide you with a brand new way to earn $319 per day online & it’s allegedly totally newbie-friendly. 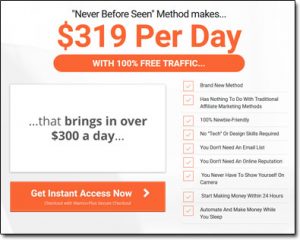 But is it actually legit or is Incognito a scam that’s just going to leave you disappointed?

Thankfully you’ve landed in exactly the right place to find out because I’ve taken a closer look into his program & in this review, I’m going to be uncovering everything there is to know about it, including how it all works & whether or not you can really make money with it.

What Is Incognito By Brendan Mace?

Well, the world incognito itself by definition means to conceal one’s identity & what I can say about Brendan’s program right from the off is that the sales page promoting it definitely conceals the information regarding how it all actually works…

Not once through the 17:55 minute video are you provided with any real insight into what you’ll be doing, how it all works or how you’ll actually be making the money that you’re promised… The video has just been put together to hype you up about the potential opportunity of making money but it keeps it all a secret to try & coax you into parting with your cash to find out more.

But that’s not the real reason his program is called Incognito – he’s called it Incognito because it’s allegedly been put together by him & somebody only referred to as Mr Anonymous… Which certainly raises suspicion.

“Mr Anonymous” by the way is actually a guy named Pallab Ghosal – that’s who Brendan Mace has created this product with anyway… But Brendan claims that you too can make $319 per day anonymously like him if you wish.

He’s likely hoping this will get many people interested because there’s a lot of people online who really want to make money but are scared about putting their name out there due to privacy concerns. To be honest, I don’t blame them, but just FYI if that’s you then you should know that there are several ways you can make money online anonymously, such as affiliate marketing which if you’d like too you can learn more about in my Wealthy Affiliate review.

But back onto Brendan’s Incognito program, how does it all actually work & can you really make money with it? Let’s take a look…

The way the Incognito program works is actually quite simple but as far as I’m concerned it has a few fundamental flaws & as a result, in my opinion, it’s unlikely that it will see you making any money at all. In fact, as you’ll soon see his program could actually end up see you losing more money than you ever manage to make back…

Basically the Incognito program is based around affiliate marketing – as are most of Brendan’s products like his other program The Banger Method for example which I also recently reviewed. To be honest, all of his programs are actually very similar, it’s almost as if he’s just rehashing them & launching them under different names…

But yeah, his Incognito program basically provides you with some training to get started with affiliate marketing – specifically using something known as a “capture page” along with paid traffic & email marketing.

Now in case you don’t know, let me just fill you in – affiliate marketing is a means of making money by promoting 3rd party products online for commissions. It’s legit in itself & it’s actually a great way to make money. Several big companies including the likes of Amazon have affiliate programs through which you can promote their products for money.

However, don’t get too hyped up about it just yet because as I mentioned above Brendan’s program in particular probably won’t see you achieving much success…

The reason for that is because the method he teaches you simply involves you creating a capture page (a basic page designed to get somebody’s email address) & then purchasing advertising to promote the page.

And that might initially sound like quite a good idea to you, and in theory, it is… But in reality, it’s not quite so easy…

The Problems With The Incognito Program

If you’re new to making money online then Brendan’s method may seem sound to you, and I’ll admit that it is possible to make money with an email list like Brendan claims but there are a few problems with the way he tells you how to do it.

Paid traffic is not the best place to start

When you’re just starting out online as far as I’m concerned the last thing you want to be doing is spending money on paid traffic. The reason for that is because paid traffic involves a LOT of trial & error, meaning it’s unlikely you’ll see a profitable campaign right off that bat. If you’re therefore not an experienced marketer it’ll be much more difficult for you to tweak the campaign to get it profitable meaning it will ultimately cost you a lot of money in mistakes.

It might seem like the right place to start because it can make things happen a lot faster, but in my opinion, for beginners, free traffic is the best place to start. Yes, it is slower but it’s much better to learn how to swim first before jumping in at the deep end.

I’ll admit that Brendan’s program does actually teach a handful of free traffic methods but they don’t go into any great deal & the ones you’re shown are not massively effective. It’s clear the main push is on paid traffic.

A capture page which Brendan teaches you to create – the page that’s designed to get people to submit their email addresses is typically just a very short, simple page with minimal information.

This means that when you start sending paid traffic to the capture page as Brendan teaches you, the people arriving there aren’t going to have any idea who you are… So why are they going to submit their email address? The likelihood is many of them won’t, meaning your paid traffic will be even less profitable since most people will just exit the page without doing anything.

If you do make money, expect a lot of refunds

For some reason rather than showing you how to promote high-quality products from websites like Amazon etc, Brendan has decided to tell you through his Incognito program that you should promote products from affiliate networks like Warrior Plus or JVZoo. The problem here is that whilst there are some legitimate products on those sites, most of them are low quality & as a result, have extremely high refund rates.

Then There’s The Price…

It might seem great that you’re going to get access to all of this information & the potential to earn $319 per day on autopilot for just a small fee of $12.95 but don’t be fooled into thinking that’s the total cost.

If you want to get the “full” program then you after paying the $12.95 to get in you can expect to be faced with several upsells that will ultimately see you spending over $2,000 in total.

Yup, you read that right… $2,000! It’s almost as expensive as the high-ticket AWOL Academy program I recently exposed.

All in all that’s $2,146.95 you’ll have spent on this program & that’s before you even start investing in any of the paid traffic which you’ll be recommended to buy as you progress through his training.

The worst part is that you could have gotten all of the information for free at Wealthy Affiliate.

Basically whilst Brendan’s Incognito program is indeed built on a legitimate method, the sales page promoting is just way too hyped up & therefore, in my opinion, you’re just being misled into purchasing something that really won’t help you make money.

Like I say it’s as if they’re just telling you what they think you’ll want to hear so that they can get you to buy into it, they’re not actually being totally honest about what the program really entails.

Is Incognito a Scam?

It’s definitely not a scam, I wouldn’t go that far – but it is pretty misleading and despite it containing legitimate training I don’t really like the way that Brendan Mace (the creator) is selling you into it.

The other issue is that whilst it claims to be 100% newbie-friendly, it doesn’t really give you the full deal & therefore as a newbie joining the Incognito program I think you’d likely find yourself confused & feeling “stuck”.

So overall I am not going to be recommending this program to you because I believe that the creators are not truly interested in YOUR success, they’re more interested in just lining their own pockets at your expense. If you really want to learn how to make money online then you can check out these legitimate methods here for free instead.

I’ve gotta admit though it’s a shame the way the Incognito program has been marketed really because if they were honest about the program (and priced it a lot lower) then it could have actually been pretty useful for people who wanted to learn more about email marketing.

Anyway that’s all I’m going to say about it but hopefully, my review gave you the insight that you were looking for and if you happen to have any further questions or comments about it don’t hesitate to leave them below.