If you’re part of an MLM opportunity then no doubt you’ll be working hard to try & build your downline & Build My Downlines might be a tool that you’ve considered using.

It’s pretty much safe to say that realistically in MLM, your downline is the lifeblood of your business. Yes, you can sell products, but everybody knows the real money comes from getting others to sell products underneath you.

And then getting those to under you to duplicate those results. “Just get 5, who get 5 more”, etc…

The problem though is that it can be VERY hard to actually build that downline & it can be even harder to get the people who do join to duplicate… So tools like the Build My Downlines downline builder which promise to help can seem attractive.

Is it legit? And can it really help you to build your downlines, or is it just a waste of time & money?

So to help you figure that out I decided to put together this review of Build My Downlines in which I’ll explain exactly how it all works & help you to decide if it’ll really be the best tool to help you see success.

What Is Build My Downlines?

Basically Build My Downlines is a tool that promises to do 2 things. It promises to help MLM business owners with a way to increase their downlines, and it promises to provide people looking to join an MLM with the opportunity to get rewarded for joining somebody’s downline.

When you step back & look at it, the people behind it have essentially attempted to create a “cashback site” of MLM opportunities.

So whereas with a cashback site you’d get rewarded for shopping via the cashback site instead of going direct, Build My Downlines has attempted to do the same thing only instead of purchasing shopping, you’re signing up to an MLM.

Interesting idea to say the least, but does it actually work?

Let’s take a closer look at the ins-and-outs…

How Does Build My Downlines Work?

As mentioned above there are 2 different sides to Build My Downlines. You can be an advertiser looking to get new people onto your downline or you can be a member looking for an opportunity to join. 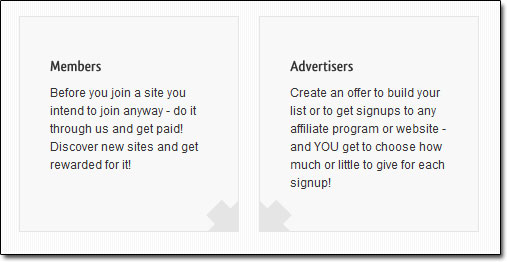 So to begin with, let’s discuss it from an advertisers perspective because after all, most people joining Build My Downlines will be joining it recruit new people, not to find new opportunities (hence its name).

You’ve already got an MLM opportunity & you want to build your downline, so you sign up to Build My Downlines as an advertiser.

What you’ll then be instructed to do after signing up is enter the details of your opportunity (along with your referral link) and then set a bid amount as to how much you want to pay somebody if they join.

After doing that & depositing some money, your ad will go live – then if somebody browses the Build My Downlines directory & joins the opportunity via your link, the money will be deducted from your account accordingly.

Straight forward enough, right? Unfortunately, though there are a few problems which I’ll run over with you in a few moments. Before that though let’s take a look at it from a member’s perspective.

So basically if you’re thinking about joining an MLM, like Rodan & Fields, then rather than join directly the idea is that you’ll head to Build My Downlines & search for it within their directory first.

If it’s there, you can see next to the listing how much you’ll earn if you join & if you do join, then once your membership is paid then you’ll get given the relevant earnings accordingly (whether it be cash or credits).

The Problems With Build My Downlines

First and foremost, one of the biggest problems is that there are next to no opportunities listed inside of the Build My Downlines directory… Meaning anyone who does actually visit the site wanting to join an opportunity likely won’t be able to find it.

As an example, I mentioned Rodan & Fields in the previous section of this review so let’s take a look to see if it’s listed.

And that’s literally one of the biggest MLM companies out there, so that isn’t listed then it’s not off to a good start.

The next problem though is that not every offer provides a cash reward.

In fact, according to the statistics at the bottom of the Build My Downlines website, (shown below) there are actually currently only a mere 12 offers that offer a cash reward & 105 that offer “advertising credits” as a reward:

Earning advertising credits basically just gives you the opportunity to then list your own opportunity in the directory, but most credits only pay enough for you to get around 1 sign-up, so pretty worthless.

Then there’s the fact that most of the opportunities cost money to join – meaning it will only be effective if you literally are going to be joining the company anyway, otherwise you’d just find yourself spending more than you earned.

Some of the offers listed too are scams & one example of that is HoneyGain which is currently listed within the BuildMyDownlines directory. I recently reviewed it & believed it to be a Russian data/botnet scam.

Then finally & probably most importantly, there’s the fact that paying for referrals is against the most companies’ rules.

This means that even if you do successfully manage to get referrals onto your downline via Build My Downline, the chances are that you’ll probably end up getting kicked out of your opportunity as a result.

The risk is simply not worth the potentially small reward in my opinion.

A Better Way To Build Your Downline…

When you’re trying to build a business it can be easy to keep getting distracted because they are so many “shiny objects” out there that claim to make your life easier, but in reality, just make it more difficult or costly.

In my opinion, the Build My Downlines downline builder is one of those things.

But if you can just ignore the shiny objects, you will realize that there are quite a few legitimate (and relatively easy) ways to get eyes looking at your business & one of those ways is through content marketing.

Content marketing is extremely powerful & as a result, it’s one of my favourite & highest recommend forms of marketing.

The best part? It’s free… And once you’ve gained momentum with it, the results are sustainable & long-lasting.

You see once you create content online, like a video or an article, it gets listed within the search results of search engines like Google, Yahoo & Bing, etc. This means that it becomes available for people to click on.

Then, once a visitor comes here I could suggest to them a business opportunity or product I was promoting etc.

So rather than wasting time on gimmicky methods or tools like Build My Downlines, if you put a focus onto something like that then you’d be able to build up a sustainable source of “eyes” for your business.

And if you’d like to learn more about it or get the tools you need to put it into action then I’d highly recommend you check out Commission Academy as it’s there that you’ll learn about this type of marketing & get everything you need to get started.

But back onto Build My Downlines…

Is Build My Downlines a Scam? My Verdict

Build My Downlines definitely isn’t a scam, but it’s certainly nothing revolutionary either… It’s just an advertising platform that enables you to pay per sign up rather than pay for advertising & hope for sign-ups.

The problem though is that barely anybody seems to use it so your chance of actually getting any sign-ups will be slim to none, meaning that you’ll likely just find yourself wasting money by making a deposit & getting nothing in return.

As I mentioned in the previous section of this review, I’d advise against trying out gimmicky methods or tools like Build My Downlines & instead just focus on a legitimate form of marketing, like content marketing which is taught at Commission Academy.

So overall my verdict is that Build My Downlines is legit, but in my opinion not very good.

I’ll also point out here that many years ago I did actually try out a few MLM’s. I did find pretty good success with them, but I decided I didn’t really like it & put my focus back onto affiliate marketing.

In my opinion, compared to multi-level-marketing, affiliate marketing is MUCH easier – so if you haven’t done so already I’d highly recommend you give it a shot, even alongside your current business to see the difference.

That’s just my 2 cents though, of course, it’s up to you to do what you want… But whatever you do I just hope that my review of Build My Downlines here has given you a good insight into how it works & whether or not you really want to use it.

If you have any further questions or comments feel free to leave them below, and if you’d like to see even more ways to earn money online then be sure to check out my top picks page right here. 🙂