The Clicks Valley website claims that “creating ad-ditional income is flippin’ easy” & it leads you towards believing that you’ll be able to easily make a fortune online by simply investing in advertising, even if you’ve never previously made a single penny online before. 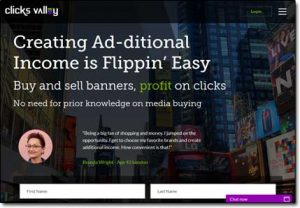 But is it really legit, or will Clicks Valley scam you & just leave you disappointed instead?

Luckily you’ve landed in the right place to find out (and hopefully you haven’t yet invested) as I’m going to be sharing the real truth about the whole thing right here in this honest review & I’ll also be uncovering why Clicks Valley is NOT what it seems.

What Is Clicks Valley?

Clicks Valley is what’s known as an ad flipping opportunity – though as you’ll soon shortly see here in my review, such an opportunity doesn’t actually exist. The reason I can say that so confidently right from the off is that I’ve seen this exact same thing before launched under several different names.

Some of the names it’s previously been launched under include Clicks Dealer, Banner Bit & Daily Banner Profits. They all appear to be different websites – but in reality, they are all part of the same operation.

The truth is that the people behind all of these websites just want to part you with your cash so that they themselves can make money at your expense – and to do that they have presented this fake ad flipping concept.

The idea is that you’ll be able to sign up, invest some money & then begin purchasing adverts that will be placed on various different websites online. The creators claim that you’ll then be able to earn a passive income from the revenue generated from the ads that you invest in and that you’ll also be able to later resell the ads on for profit as they increase in value over time.

To a newcomer it will likely seem to be an ideal opportunity – after all, it seems like a total win-win. You get to earn a passive income from the ads you invest in & then you later get to sell them on for profit if you decide you want to cash in… How could you lose?

Well sadly whilst it seems great on the surface, in reality, it is far from so – and instead the only thing Clicks Valley will really help you do is LOSE money, not make it – which you’ll soon see for yourself below when I show you how it all really works.

How Does Clicks Valley Work?

So as I briefly touched on in the above section of this review, the idea is that you’ll sign up to Clicks Valley & be able to invest in online advertising – specifically banners to be precise. From the investments that you make you’ll then allegedly begin earning whenever the banners that you own are clicked on, and you’ll be able to also later re-sell the banners for profit.

To get started you firstly have to register as a new member which involves entering your name, email & phone number – along with a few other details about yourself. You might suspect the phone number to be an unusual requirement, and admittedly it is – but you’ll soon see how it comes into play in a moment.

Normally websites will just ask for your email address at most and some will ask for a phone number as an optional field. It’s rare, that unless you’re “applying” for something that you need to be contacted about that you’ll ever actually be asked for your number as a mandatory requirement.

But the reason they do ask for it is that after signing up the first thing you’ll discover is that you need to invest at least $250 in order to get started. That is literally the very first thing that you’ll need to do once you get in…

And surprise surprise if you do happen to sign up to Clicks Valley (which I don’t recommend) then you’ll also find that your phone starts ringing almost immediately after hitting the registration button. This is because a so-called “account manager” wants to ensure you succeed with the platform.

In fact, the guys on the other end of the phone will actually encourage you to deposit as much as $25,000 as they claim that their opportunity is a sure-fire way to generate a great return on your investment.

But In Reality, It’s Not…

And sadly this is something that you’ll only be left to discover after you invest – however it won’t happen immediately. In fact, at first, you might find yourself getting excited as after investing in your first few banners the Clicks Valley system will make it look like you’re generating great profits.

The problem though is that the profits shown are all phoney, and the only reason they’re shown is to get you to deposit even more money. The creators want you to believe that it’s really working so that you’ll invest even more… But ultimately when you come to withdraw it all you’ll find that the whole thing’s a fake.

The profits were not real – the banners never really existed – and the truth is that you were merely just playing a “video game” simulation.

As you can likely imagine, from here things will take a downward spiral. Your withdrawal request will either be ignored or point-blank refused… And if you pursue a refund or try to contact the “team” you’ll just likely find yourself locked out of your account instead.

They don’t want to know… They’ve got your money & they’re happy.

Can You Get Your Money Back?

If you’ve already invested into Clicks Valley prior to reading this review then you might be wondering how (or if) you can get your money back. What I will say from what I’ve seen at the other similar companies (the ones I mentioned at the start of this review) is that Clicks Valley will certainly make it VERY difficult for you to get your money back.

They make it difficult because cleverly when making your first deposit they likely offered you a bonus… And to accept this bonus you had to receive, sign & resubmit some paperwork, which basically removes your rights for a refund.

So working alone you will likely struggle to try to fight for your money back, however, the good news is that there are chargeback companies out there, such as MyChargeBack that could fight your case & get your money back for you.

They have been highly successful & getting people reunited with their money & if you have lost a substantial amount yourself I wouldn’t highly recommend chatting to them to see if they can help.

But anyway, that brings me onto…

Is Clicks Valley a Scam?

In my personal opinion, yes – Clicks Valley is a flat-out scam. The reason I say that is because as far as I’m concerned the whole thing is illegitimate & it’s purely set out to part you with your hard-earned cash.

There is no such thing as “ad flipping”, and it’s just a made-up concept that they’ve thought up to trick you into investing your money. I can assure you there is no way you’ll actually find yourself profiting through their website.

Instead, if you really want to make money with online advertising then you should check out a legitimate program (which is actually free to join) like Commission Academy instead. It’s there that you’ll get the proper training & tools you need to make good money online.

I just hope though that my review here has helped you get a better idea as to how Clicks Valley actually works & I also, more importantly, hope that it’s helped you keep a hold of your cash rather than losing it to them.

If you do however still happen to have any further questions about it that you feel I didn’t cover then don’t hesitate to leave them below & I’ll get back to you as soon as possible. Plus if you yourself have any comments on it then be sure to leave those below too.