In this review, I’m going to be taking a closer look at a new make-money program that’s just launched named Clone My System through which the owner claims he can enable you to begin generating profits of $3,000 per day by merely “duplicating his system”. 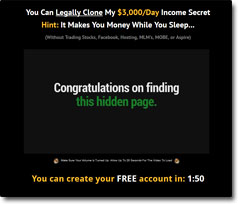 Allegedly, the system consists of “no tricks & no gimmicks, just guaranteed results”… So I’ll be putting that claim to the test & finding out if it holds true in just a moment.

In this review, I’m going to be uncovering literally everything you need to know about this system & helping you determine whether or not you can actually make money with it. It’s also worth pointing out too that I am not an affiliate which means you can rest assured that you’ll be getting the honest truth.

What Is Clone My System?

The irony is that the Clone My System program is actually a clone of a scam that I noticed operating earlier this year named Copy My Websites. It looks like the creator has just re-branded the system in an attempt to part even more people with their hard-earned cash.

And the other ironic thing is that the website boldly claims there is “no gimmicks” yet the whole thing about it being a hidden page is a total gimmick, they’re just telling you this to try & make you think you’ve got access to something secret to trick you into signing up.

The concept is that after signing up & paying the $47 joining fee you’ll get a clone of the creator’s website which is currently earning him $3,000 per day (or so he says), however, unfortunately, in reality, things don’t work like this.

The internet is a fantastic tool but it isn’t magical & you can’t begin making money just by copying somebody’s website – if you could then everybody would be doing it.

The truth is that the creator is simply preying on inexperienced people who think that it might be possible to profit this way, but let me confirm it isn’t.

To Make Money Online You Need More Than a Website

Having a website is just the first part of the equation, to begin making money you need what’s called traffic – which basically means people coming to your website. If you have a website but nobody is visiting it then you are not going to make any money.

With the Clone My System program, you are literally handed a website (and a rubbish one at that) – but that it’s it, you get no traffic & you’re given absolute minimal information on how you can get it. It’s certainly not worth handing over $47 for.

In my opinion, if you’re genuinely interested in learning how to build a real income online from a website then you’d be better off joining a reputable training company (and one that offers a free membership so you can try it out before committing yourself) such as Wealthy Affiliate.

So let’s step back for a moment…

If making money is literally as easy as just being able to clone a profitable website why would you go out of your way to create a program showing other people how to do it? And more importantly, why would you charge $47 a piece for it?

Clone My System Is a “Hype Scam”

Okay, I’m going to come out & say it – Clone My System is hands down a scam. Yes, you do get “something” when you hand over your money, but that “something” certainly doesn’t provide value for money and nor does it live up to any of the claims. In my opinion that is a scam…

The scam itself isn’t actually all that technical, in fact, it’s quite common throughout the make money online industry – it’s what I like to call a “hype scam”. Basically, all they are doing is building hype, making it seem like you can make easy money, then charging a hefty fee & making it difficult for you to get a refund when you find out what you’ve bought isn’t what you were promised.

I’ve come across a lot of similar scams over the past couple of months alone such as the EZ Money Team system & the Affiliate Millionaire Club.

Basically YES it’s possible to make money online but it takes work & anything that promises otherwise should immediately make you sceptical. Building an income online is just like doing it offline there are no “automatic” money-making programs & you cannot make money just by copying somebody’s website.

Clone My System is absolutely not legit – it’s an over-hyped, overpriced piece of junk & it is something that will certainly not see you making $3,000 per day. I do not recommend Clone My System, in fact, I actually recommend avoiding it because in my opinion, it’s a complete waste of money.

The worst part is that if you do happen to sign up to the Clone My System program then the scam doesn’t end there, in fact, that’s where it only just begins. That’s because as soon as you enter your email you’ll be automatically signed up to their email list & they’ll continue to push various other scammy programs through to your inbox on a daily basis.

So whilst this product is only $47 & you might be able to cut your losses the chances are that they’ll try & scam you again further down the line but it will likely more than likely be for a lot more money. I’ve seen people start out by losing around $47 and then gone on to lose thousands as they were drawn into other things by the same scammers as sadly these people are very good at making things seem legit to newcomers.

I just hope that you came to my review first & managed to keep hold of your money as $47 is still $47 that you would be better off in your pocket than theirs.